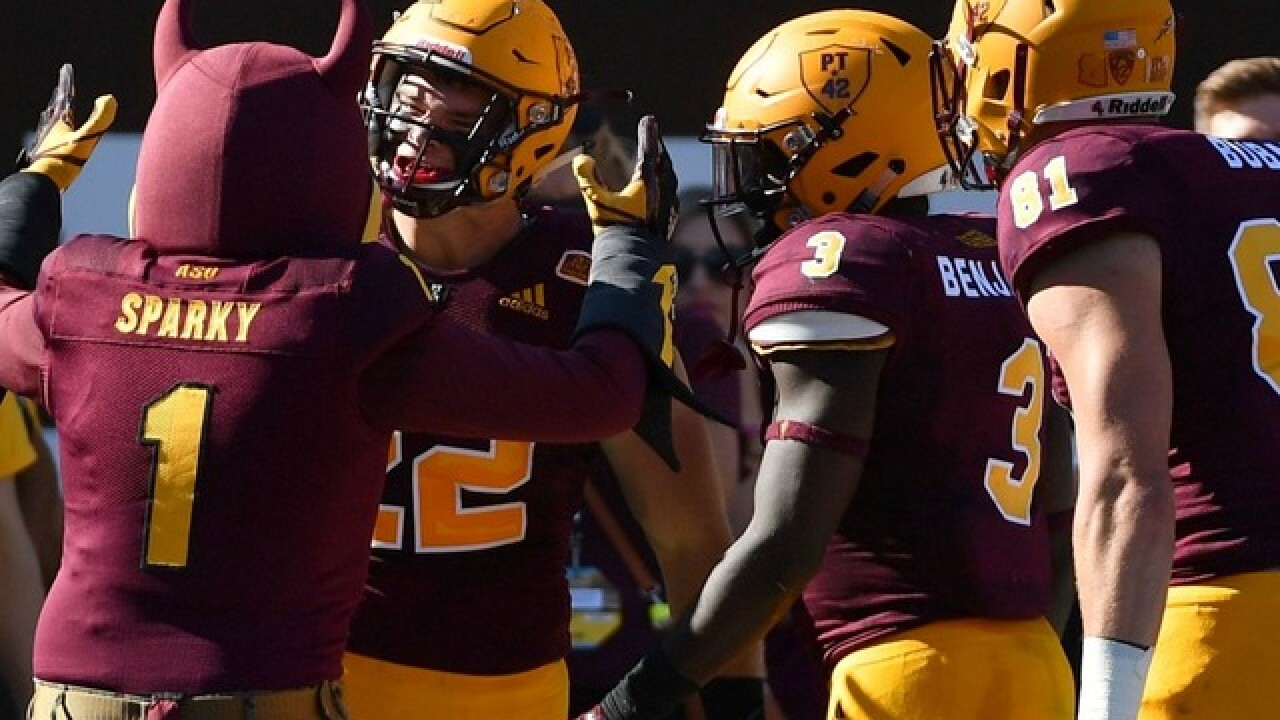 Copyright 2018 Scripps Media, Inc. All rights reserved. This material may not be published, broadcast, rewritten, or redistributed.
Jennifer Stewart
<p>Linebacker Nick Ralston #22 of the Arizona State Sun Devils Sun Devils celebrates a five yard touchdown in the first half against the UCLA Bruins at Sun Devil Stadium on November 10, 2018 in Tempe, Arizona. (Getty Images)</p>

The Arizona State Sun Devils took care of business on Senior Day, and moved even closer to an improbable Pac-12 South division championship.

Picked by many experts to finish last in the South this season in head coach Herm Edwards' first year at the helm, ASU became bowl-eligible and moved into first place in the division with a 31-28 victory over UCLA in its final home game of the season.

The win didn't come easy, though, as the 2-8 Bruins had a chance to win in the final seconds. After scoring a touchdown with two minutes to play, UCLA held ASU on defense and got the ball back with about 1:30 left. But a sack, followed by back-to-back false-start penalties, sealed the victory for the Devils.

The win gave ASU its third straight victory and moved the Sun Devils to 6-4 overall and 4-3 in conference play. Utah defeated Oregon later on Saturday, moving the Utes back into first place in the South with a 5-3 division record. Arizona is also 4-3 in the South.

However, the Devils have already beaten Utah, and they'll play the Wildcats in two weeks. That means the Devils will become Pac-12 South champions for the first time since 2013 if they win their final two games of the season.

Senior quarterback Manny Wilkins was emotional before the final home game of his Sun Devil career, and he channeled that emotion into an outstanding farewell performance in Tempe. Aside from one mistake that led to an interception return for a touchdown, Wilkins was his usual impressive self, completing 16 of 22 passes for 199 yards and a touchdown, and rushing for 60 yards and a pair of TDs.

An emotional Manny Wilkins runs out of the Tillman Tunnel for the final time pic.twitter.com/b19BQ4k8NF

Nothin' better than a @MannyWilkins5 touchdown. 👊

Wilkins' underclassmen teammates did their job, as well. Sophomore running back Eno Benjamin rushed for 182 yards and a touchdown on 34 carries, and junior wide receiver N'Keal Harry had seven catches for 100 yards.

That's how you draw it up on 4th down 😎 pic.twitter.com/OrtoIqe7Mj

ASU went 5-1 at home this season, including 5-0 in Saturday home games. The Devils' only home defeat came vs. Stanford in a Thursday night matchup.

The Devils, however, are just 1-3 away from home this year, and their final two games of the season will be on the road. They'll head to Eugene next week to take on the 6-3 Oregon Ducks, and in two weeks they'll travel to Tucson for the annual Territorial Cup game. The home team has won each of the last four meetings between ASU and UA.