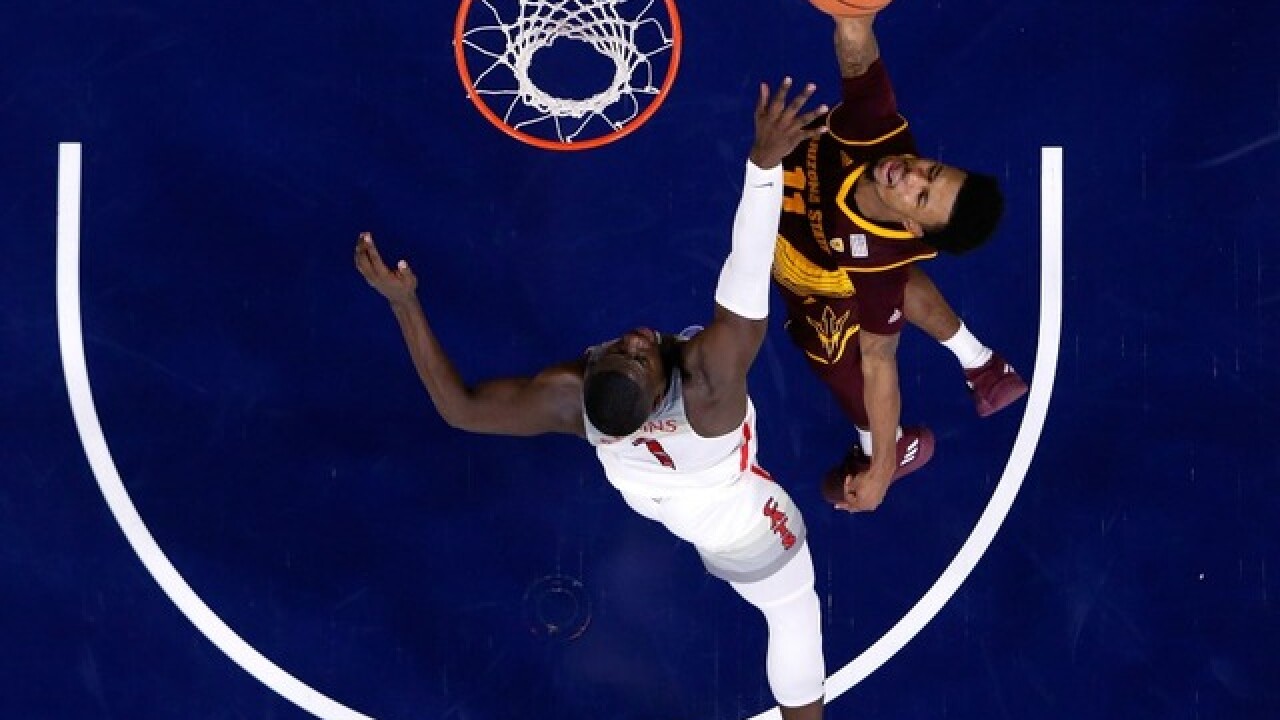 Copyright 2018 Scripps Media, Inc. All rights reserved. This material may not be published, broadcast, rewritten, or redistributed.
Chris Coduto
<p>Shannon Evans II #11 of the Arizona State Sun Devils shoots over Rawle Alkins #1 of the Arizona Wildcats during the second half of the college basketball game at McKale Center on December 30, 2017 in Tucson, Arizona. (Getty Images)</p>

Dec. 30 marked the first time in nearly 23 years that both ASU and UA were ranked in the top 25 when they played each other.

It will take less than two months for history to repeat itself.

ASU (19-6, 7-6 Pac-12) climbed back into the Associated Press top 25 poll Monday after beating USC and UCLA in Tempe last week. The Sun Devils came in at No. 25 in the poll after dropping out a week earlier.

Meanwhile, the Wildcats (20-6, 10-3) are ranked No. 17 in this week's AP poll, dropping four spots from last week. UA lost to UCLA in Tucson on Thursday but rebounded Saturday with a convincing win over USC.

ASU and UA are the only ranked teams in the Pac-12, setting the stage for a much-anticipated rematch between the Sun Devils and Wildcats on Thursday at a sold-out Wells Fargo Arena in Tempe.

The Sun Devils were ranked No. 3 nationally (matching their highest ranking in school history) and were the nation's last remaining undefeated team when they took on the No. 17 Wildcats in Tucson on Dec. 30. But UA handed ASU its first loss of the season  in a nail-biting 84-78 contest, the Pac-12 opener for both teams. It was UA's eighth straight win vs. ASU at McKale Center.

Bobby Hurley is 0-5 vs. Arizona as ASU's head coach, while Sean Miller is 13-4 vs. the Sun Devils, including 5-3 in Tempe, as head coach of the Wildcats. But the Devils have the hot hand, as they've won three straight games, while the Wildcats have lost two of their last three.

Thursday's game will tip off at 7 p.m. on ESPN.