3 big takeaways from the Sun Devils' loss to No. 10 Washington 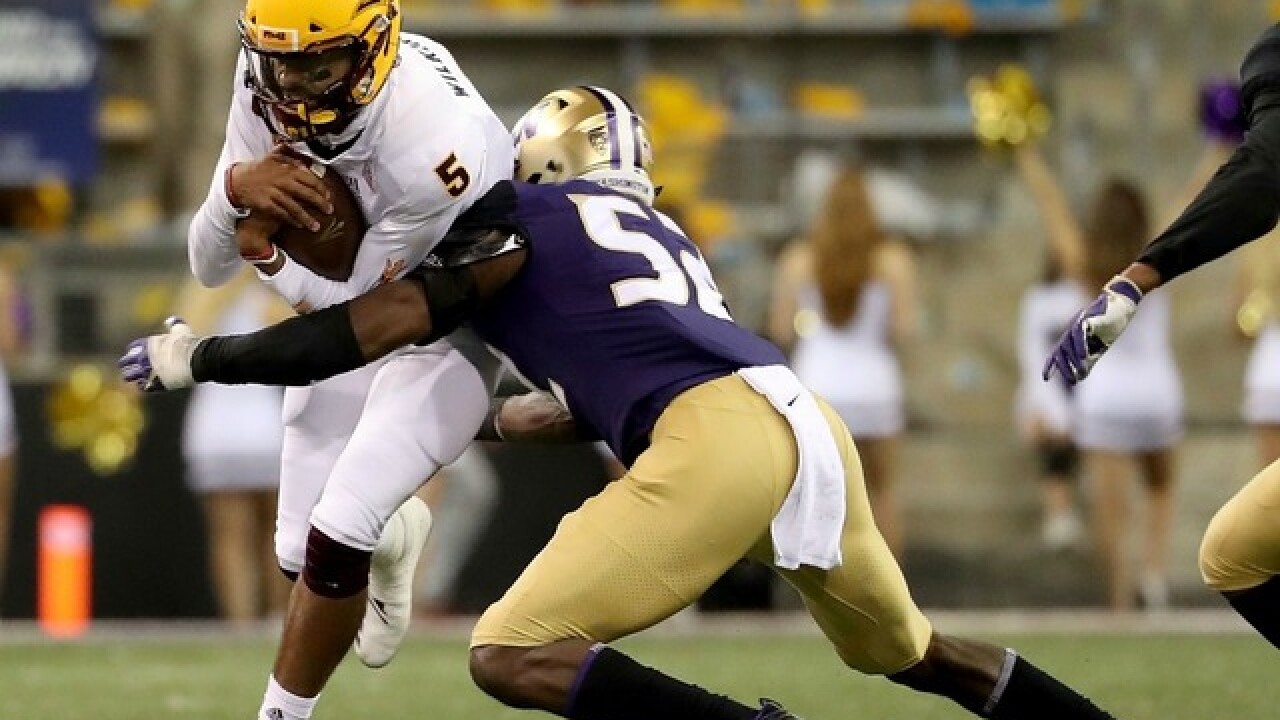 Copyright 2018 Scripps Media, Inc. All rights reserved. This material may not be published, broadcast, rewritten, or redistributed.
Abbie Parr
<p>Manny Wilkins #5 of the Arizona State Sun Devils runs with the ball against Ariel Ngata #52 of the Washington Huskies in the second quarter during their game at Husky Stadium on September 22, 2018 in Seattle, Washington. (Getty Images)</p>

The Arizona State Sun Devils had a textbook start to Saturday's showdown in Seattle, but were worn down over four quarters by a slightly more talented and physical team.

The Devils fell 27-20 at No. 10 Washington on Saturday night to fall to 2-2 on the season and 0-1 in Pac-12 play. ASU intercepted a Washington pass on a trick play on the first play of the game and went on to score a touchdown to take an early lead, but Washington senior quarterback Jake Browning was nearly flawless, completing 15 of 22 passes for 202 yards and three touchdowns.

Here are three big takeaways from the Devils' narrow defeat.

N'Keal Harry may be the best receiver in college football, but on Saturday, the Huskies made the junior disappear.

Washington did an outstanding job of blanketing Harry for most of the game, and quarterback Manny Wilkins missed an open Harry on a couple other occasions. For the game, Harry had just 20 receiving yards, his lowest single-game total since his freshman season when he was limited to 13 yards at Cal on Oct. 15, 2016. He did have a big punt return to set up a late ASU touchdown, but it was too little, too late for the Devils.

Wilkins didn't have much luck throwing to other receivers either, as he managed just 104 yards on 27 passing attempts, less than four yards per attempt.

After being held to just 36 rushing yards in last weekend's loss to San Diego State, the Sun Devils were able to make some noise on the ground at Washington, thanks largely to Eno Benjamin.

The sophomore set the tone early after Washington's turnover, grinding out 20 yards on six carries and a touchdown on fourth and goal. For the game, Benjamin rushed for 104 yards on 26 carries and added 14 yards on three receptions. It's an encouraging sign -- and after seeing what the Arizona Wildcats were able to do vs. Oregon State earlier Saturday (442 rushing yards), Benjamin has got to be excited for the Beavers' visit to Tempe next week.

3. Too many defensive mistakes

ASU's defense had a decent outing, coming up with some key stops to keep the game competitive through four quarters. But missed tackles and silly penalties came back to bite the Devils.

Washington's running back duo of Myles Gaskin and Salvon Ahmed were the beneficiaries of some sloppy ASU tackling, gaining a combined 157 yards on 31 carries. ASU was called for several personal fouls, including a late hit with just over two minutes left to seal Washington's victory.