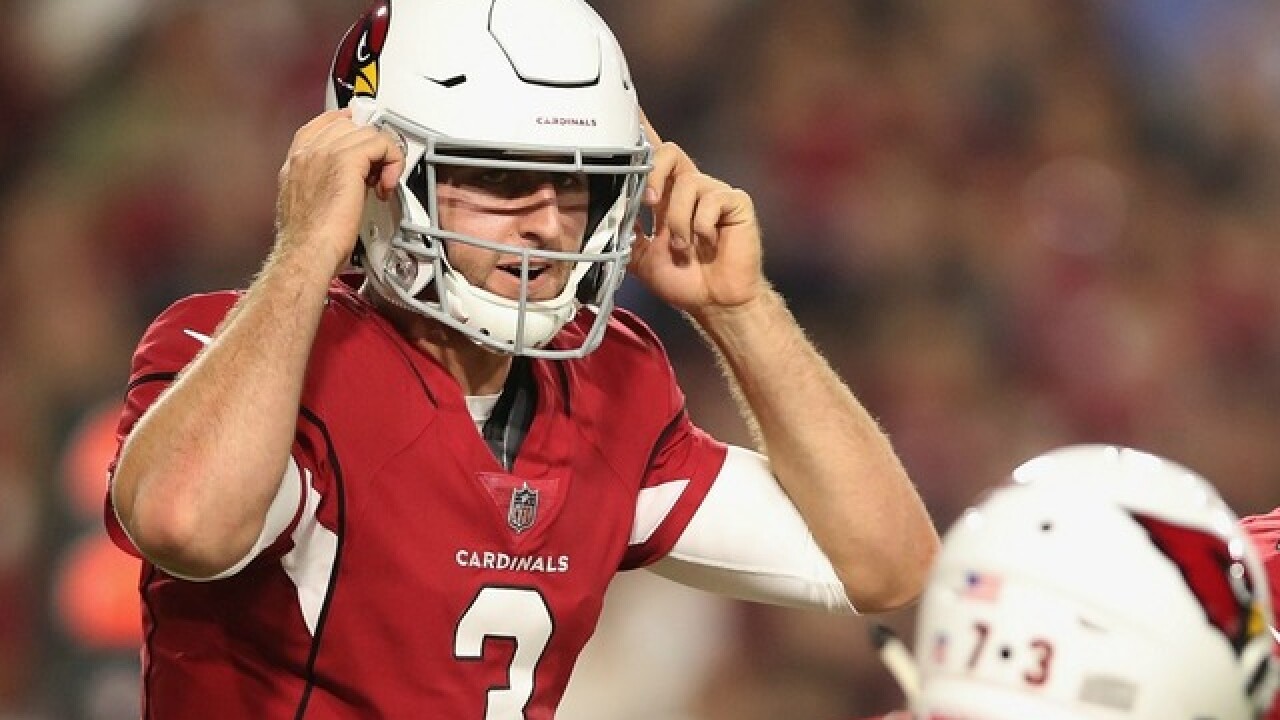 Copyright 2018 Scripps Media, Inc. All rights reserved. This material may not be published, broadcast, rewritten, or redistributed.
Christian Petersen
<p>Quarterback Josh Rosen #3 of the Arizona Cardinals calls a play during the preseason NFL game against the Los Angeles Chargers at University of Phoenix Stadium on August 11, 2018 in Glendale, Arizona. (Getty Images)</p>

The Arizona Cardinals will face the Denver Broncos in their final preseason game Thursday night. After the game, the team will have some difficult decisions to make in order to trim their 90-player roster down to the mandatory 53-man roster for the regular season. Those cuts have to be made by Saturday.

With that in mind, here are three big questions for the Cards heading into Thursday night's game in Glendale. (Kickoff is at 7 p.m. Arizona time.)

1. Will Josh Rosen suit up?

The Arizona Cardinals' first-round pick in April's draft was held out of Sunday's game at the Cowboys for precautionary reasons with a minor thumb injury. Rosen said his thumb is fine now, but coach Steve Wilks was non-committal as to whether Rosen will see action Thursday night.

Rosen will likely begin the season as a backup to veteran QB Sam Bradford. But after a terrific performance in the Cardinals' second preseason game, it would be a shame for Rosen to miss back-to-back opportunities for experience in a real-game situation -- even if that game doesn't count. Will Rosen take the field Thursday, and if he does, will he continue to look the part as the Cardinals' possible quarterback of the future? (Update: NFL Network's Steve Wyche reports Rosen will not play in the Cardinals' preseason finale.)

2. Which wide receivers will step up?

Wilks was asked Tuesday about which position battles are still ongoing. "I think you've still got to look at the receiver position," he said. "I think that's a position right there that I think is still ongoing, and guys are really trying to compete and separate themselves, and it's going to go down to the wire."

Larry Fitzgerald and second-round pick Christian Kirk are locks to make the roster. After that, it's a bit unclear. 2017 third-round pick Chad Williams has had an outstanding preseason thus far, while free-agent signings Brice Butler and Greg Little, along with fourth-year pro J.J. Nelson, have gotten a bit lost in the shuffle.

ESPN's Josh Weinfuss projects all six men will make the team, but do any of them need to show Wilks something Thursday in order to secure a spot? Also, has Kirk done enough during this preseason to earn a starting job opposite Fitz, or does he have more to prove?

3. What about the cornerback position?

Along with wide receiver, cornerback is another position still in flux heading into the regular season, according to Wilks. Perennial All-Pro Patrick Peterson is the Cards' undisputed No. 1 cornerback, but the No. 2 spot could still be up in the air.

Jamar Taylor, whom the Cardinals acquired in a trade with the Cleveland Browns in May, is currently listed as a starter opposite Peterson, but he might not be a lock for the job. His top competition could be free-agent signing Bené Benwikere, who played for Wilks with the Carolina Panthers and has made one big play after another during the preseason. Will either man separate himself Thursday in Glendale?