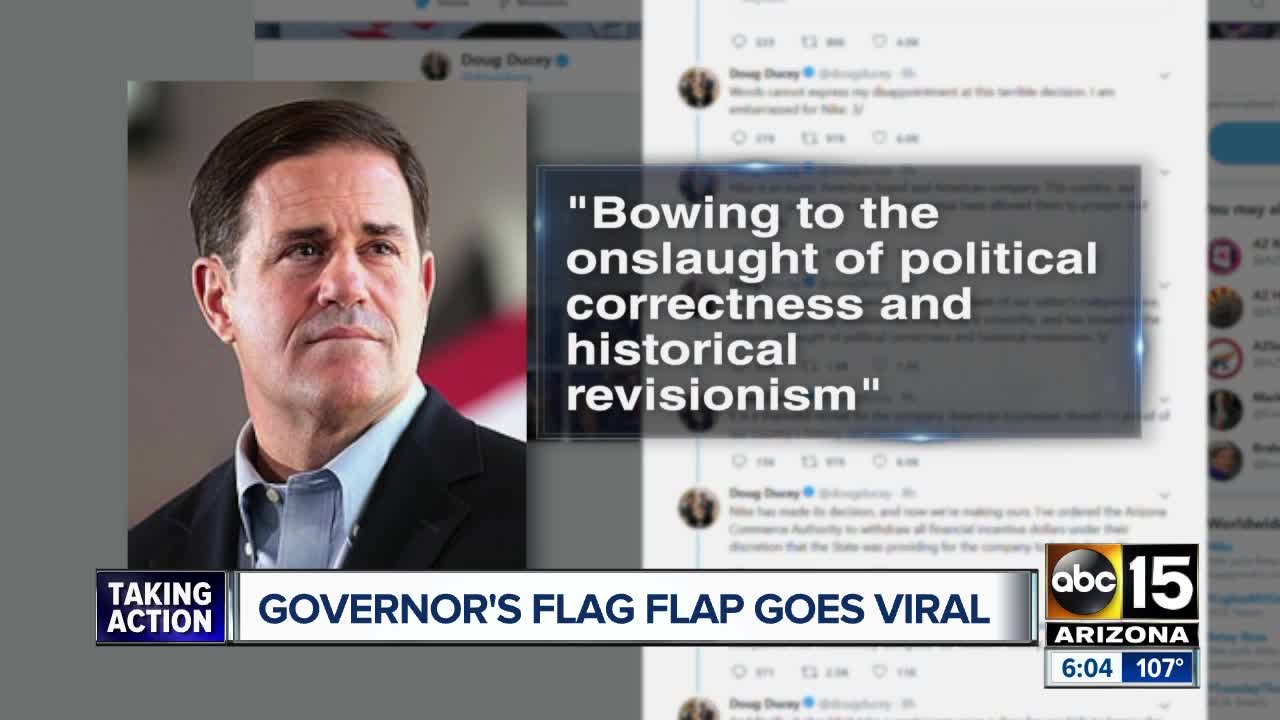 Ducey says Nike cannot get state money for a planned factory in Goodyear after company pulled an American flag-themed shoe from the market. 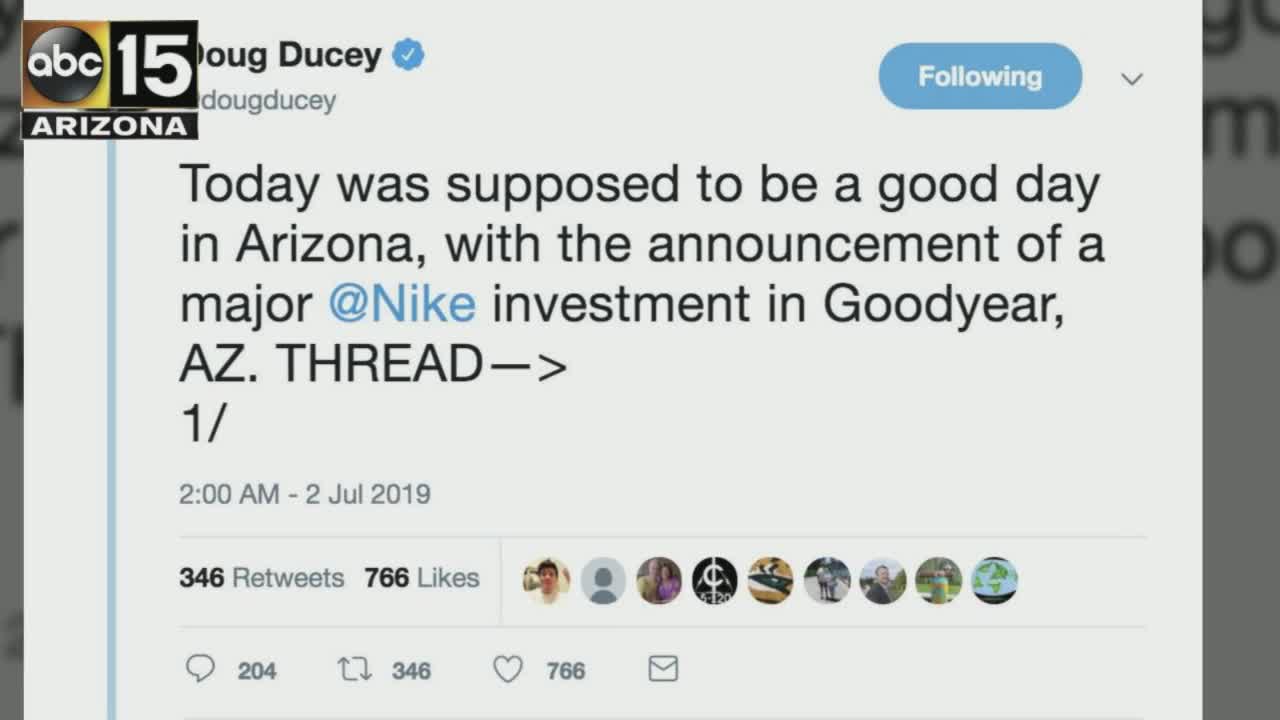 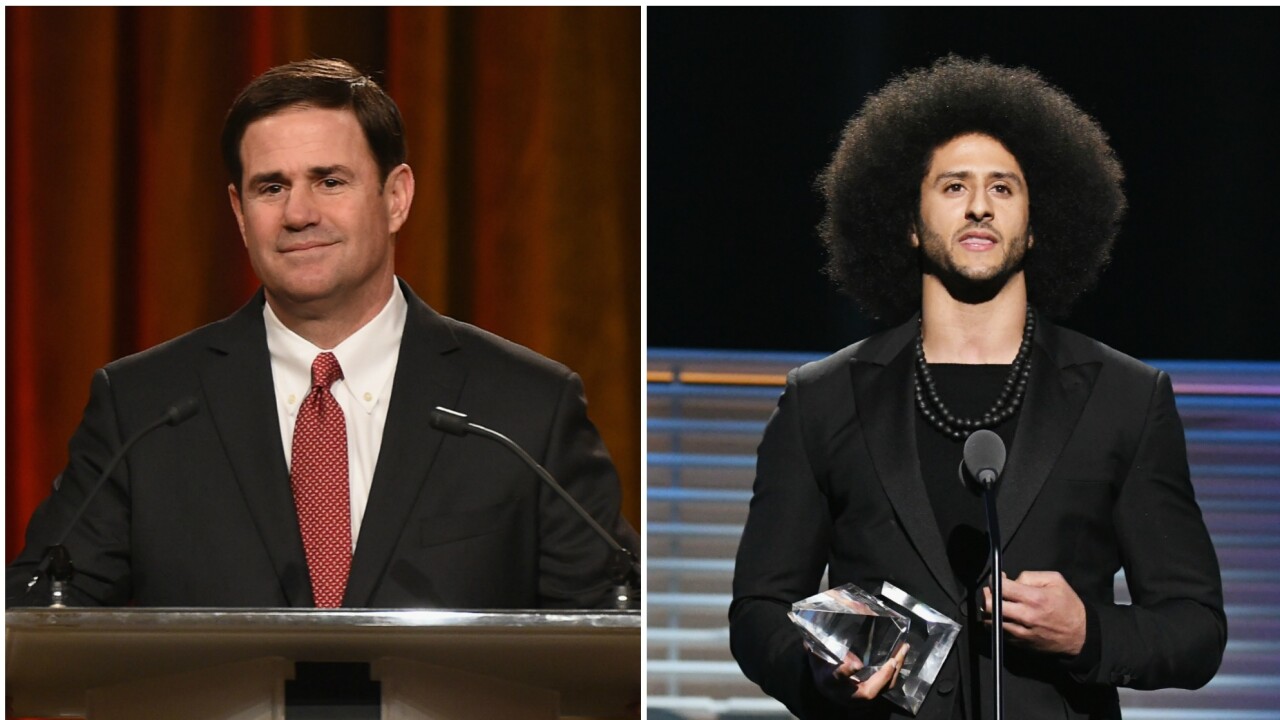 PHOENIX — In a series of tweets early Tuesday, Arizona Governor Doug Ducey announced that he has ordered the Arizona Commerce Authority to withdraw all financial incentive dollars to encourage Nike to add a manufacturing plant in the Valley.

"Nike has chosen not to release the Air Max 1 Quick Strike Fourth of July as it featured an old version of the American flag," Nike said in a statement to CNN Business following the WSJ report.

It was not immediately clear if the move, which Ducey announced on Twitter at 2 a.m., would derail Nike's plans for a $185 million factory in Goodyear. Ducey's tweets were published hours after the Goodyear City Council approved more than $2 million in tax breaks over five years, but the governor has no control over those incentives.

As part of its agreement with the city, Nike agreed to hire at least 505 full-time employees making an average of more than $48,000 a year plus benefits.

"Words cannot express my disappointment at this terrible decision. I am embarrassed for Nike," Ducey wrote. "Nike is an iconic American brand and American company. This country, our system of government and free enterprise have allowed them to prosper and flourish.

"Instead of celebrating American history the week of our nation’s independence, Nike has apparently decided that Betsy Ross is unworthy, and has bowed to the current onslaught of political correctness and historical revisionism. It is a shameful retreat for the company. American businesses should be proud of our country’s history, not abandoning it.

"Nike has made its decision, and now we’re making ours. I’ve ordered the Arizona Commerce Authority to withdraw all financial incentive dollars under their discretion that the State was providing for the company to locate here. Arizona’s economy is doing just fine without Nike. We don’t need to suck up to companies that consciously denigrate our nation’s history.

"And finally, it shouldn’t take a controversy over a shoe for our kids to know who Betsy Ross is. A founding mother. Her story should be taught in all American schools. In the meantime, it’s worth googling her."

Arizona’s economy is doing just fine without Nike. We don’t need to suck up to companies that consciously denigrate our nation’s history. 8/

In a statement Tuesday afternoon, Goodyear Mayor Georgia Lord said the city would honor its agreement with Nike.

"It has been a focus of the Goodyear City Council to build a strong economy for years to come and we will continue to work hard to bring the kind of high quality jobs that our residents deserve," Lord said.

"I agree with the Governor," Senator Martha McSally said Tuesday. "Nike got this wrong. We have to always support our flag and what it stands for."

Kaepernick is a former San Francisco 49ers quarterback who famously declined to stand for the national anthem before an NFL game in a protest of racial inequality and police brutality in the United States. He became the face of a Nike ad campaign last year, with the slogan, "Believe in something. Even if it means sacrificing everything."

The grant program Ducey targeted, called Arizona Competes, gives the Commerce Authority broad discretion to give money to companies looking to expand or remain in Arizona. As of June 30, 2018, the state had awarded 123 grants worth nearly $73 million, with just over $39 million paid out, according to a summary released in November. The Commerce Authority says that money has led to the creation of about 11,000 jobs with an average wage of about $72,000.

Goodyear is built for manufacturing and distribution. The plan is for NIKE to move into an existing structure after renovation. But in it's defense, Nike said it is proud of its American heritage and what the company calls its continuing engagement supporting thousands of American athletes including the U.S. Olympic team and U.S. Soccer teams.

Nike said, "it will remain committed to creating jobs in the U.S., including a significant investment in an additional manufacturing center which will create 500 new jobs."

Absent in the statement was any reference to Goodyear. An omission not lost on the Governor of New Mexico, Michelle Lujan Grisham. Tuesday afternoon Grisham tweeted "Nike - Let's talk."