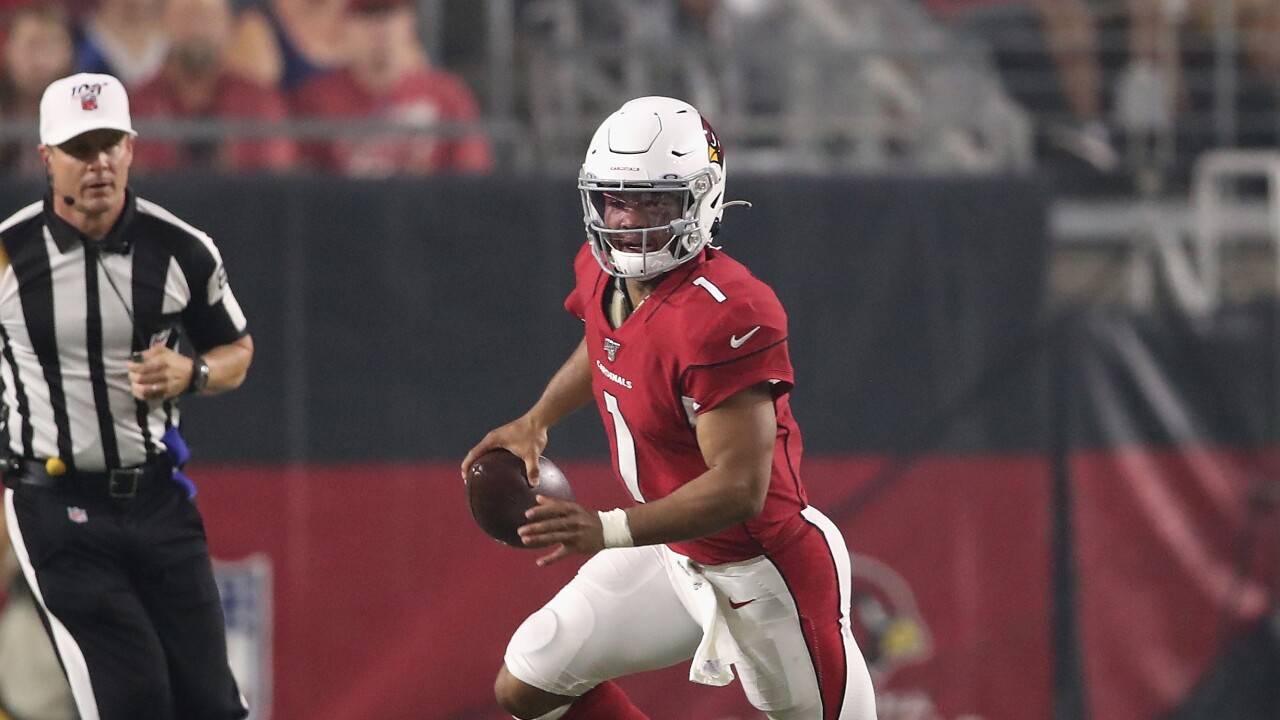 Christian Petersen/Getty Images
Quarterback Kyler Murray #1 of the Arizona Cardinals drops back to pass during the NFL preseason game against the Los Angeles Chargers at State Farm Stadium on August 08, 2019 in Glendale, Arizona. The Cardinals defeated the Chargers 17-13. (Getty Images)

GLENDALE, AZ — Thursday night football is in the Valley of the sun to celebrate Halloween! The undefeated 49ers are coming into town confident and looking to strengthen their lead over the rest of the NFC West division.

The Cardinals, however, are looking to bounce back after arguably their worst performance of the season on the road against New Orleans.

If history is any indication, anything can happen on Thursday night football, especially between two division rivals like the 49ers and the Cardinals.

So, can the Cardinals pull off the upset at home? Here are predictions from the ABC15 sports team.

Arizona has won 8-straight against the 49ers, the second longest win-streak against a single opponent in franchise history. However, this is the “new” 49ers, a team that’s off to a 7-0 start for the first time since 1990.
San Francisco has way too many weapons while the Cardinals are missing both David Johnson and Chase Edmonds at running back, leaving them with Kenyan Drake, who just arrived via trade on Monday.

The 49ers come in as 10-point favorites, but it’s a home game for Arizona on Halloween, so if the Cardinals can keep it close (and that’s a big if), they may have a chance to upset a San Francisco team that has Seattle and Green Bay coming up in the next three weeks.

Unfortunately, I’m going with the Niners in this one:

As a noted follower of Bay Area sports recently pointed out - the 49ers are great and the Warriors are bad - it's the 80's and 90's all over again!

While this is great news for the Phoenix Suns and the rest of the NBA, it is most certainly bad news for the Arizona Cardinals and the rest of the NFL. The Cardinals will get their first test of this 49ers resurgence Thursday night at State Farm Stadium (5:20, NFL Network) and this NFC West clash presents a clear and present danger. There is little question the Cardinals eight game winning streak against the 49ers is in severe jeopardy.

The 49ers are one of two remaining unbeaten teams in the NFL and despite their offensive minded head coach, this is a team built on the tree trunks of the best and most disruptive defense in the NFL. The stats back that up - the 49ers come into the game #1 in total defense, #1 in pass defense and #2 in scoring defense. Their game plan is simple - they get after the quarterback. Led by rookie sensation Nick Bosa, who has seven sacks in seven games and last Sunday became the first rookie since 1982 to point three sacks and one interception in the same game, the 49ers attack the opposing quarterback with speed and vigor. In a 51-13 win over Carolina Sunday, the 49ers blitzed only once yet had seven sacks and three interceptions. Their front seven usually whips the opposition's front seven and the Cardinals offensive line will be tested for four quarters Halloween night.

Offensively, the 49ers boast one of the game's most lethal tight ends in George Kittle and it doesn't need to be written here what that means for the Cardinals defense. It should be noted that Kittle nearly set the single-game receiving yards record for a tight end in a game against the Broncos - in the first half alone - in a game last season. The head coach of the Broncos in that game? Vance Joseph.

The Cardinals are 10.5 point underdogs and will need a huge game from quarterback Kyler Murray. Murray will have to be at his scampering best to avoid the 49ers abusive pass rush while the Cardinals defense must create at least three turnovers to alter possessions and flip field position. Pulling off this monumental upset however with brand new running backs and some lingering questions at right tackle will be too much for the Cardinals to overcome Thursday night. The Cardinals will ride some home crowd momentum and Halloween night mojo to keep in close early but the 49ers talent and defense will prevail sending the Cardinals to their second straight defeat.