ASU hockey goes from 'urban legend' to powerhouse in the desert

ASU could be Tournament-bound for the 1st time 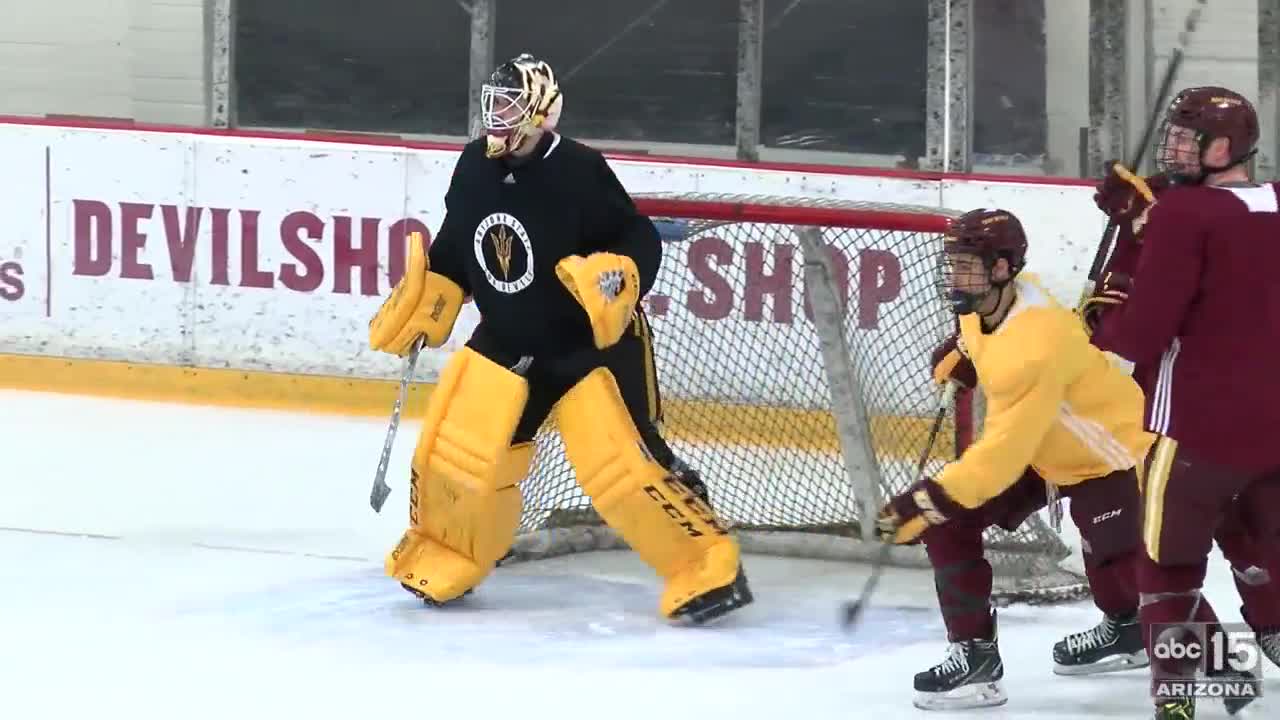 ASU hockey might make the NCAA Tournament for the first time. It's not uncommon for ASU's top student-athletes to be recognized by fans in public.

"The other day, me and a couple teammates were out for breakfast and ran into people coming up to us and were like, 'Hey, you guys are on the hockey team! you guys are killing it! Keep it going,'" Daccord said. "When I came here, that wasn’t really a thing. People wouldn’t recognize ASU hockey players out on the street or at breakfast or whatever. But it kind of is a credit to what we’re building here."

It's impossible to overstate how unlikely the Sun Devils' ascension from mediocre club-hockey team to NCAA powerhouse has been.

Eleven years ago, former ASU goalie Greg Powers became an assistant hockey coach at his alma mater, and he took over the head coaching job two years later. In 2014, he guided the Sun Devils to an ACHA national championship. In 2015, the Devils made their debut at the NCAA Division I level.

And today, the Devils are the nation's 13th-ranked team and on the verge of advancing to the NCAA Tournament for the first time in school history. Not bad for a hockey program that's easily the farthest west of any NCAA team in the continental United States.

If Powers told you this was the plan from the beginning, he would be lying.

"It was never the goal and I could have never imagined it," he said. "We just wanted to be the best ACHA Division I program, and we quickly became that.

The Devils experienced plenty of growing pains during their leap from a club program to an NCAA one, as they went a combined 23-62-10 in their first three years at the top-tier level. But now, in year four, the Devils have decidedly turned that corner, thanks largely to Daccord, who recently recorded a shutout against Boston College at the Coyotes' arena, and Phoenix native Johnny Walker, who has an NCAA-best 19 goals this season.

"We’ve kind of, up until this point, been an urban legend type of program -- 'Oh my God, they have a Division I program at Arizona State but they don’t have an arena, they don’t have a conference. One day they might be pretty good.' Now, I think we’ve got everybody’s attention," Powers said. "We’re legitimate, we’re real, and we’re not going to be able to sneak up on anybody."

ASU was reminded of that fact when it lost back-to-back road matchups to No. 17 Cornell on Friday and Saturday. The Devils went down swinging, mounting a late rally before falling 3-2 to Cornell in their second and final meeting.

Still, the Sun Devils, who aren't affiliated with an NCAA conference, are 16-9-1 this season and are well positioned to become the first independent NCAA program since Alaska-Anchorage in 1992 to punch a ticket to the NCAA Tournament, which begins March 29.

"If we let our minds start to get spinning a little bit and get ahead of ourselves, maybe things won’t go the right way. For us, I think if we just focus on the next game, the next shift, the next period, whatever it may be. That’s the way we can stay focused on the task at hand and conquer whatever comes next," Daccord said.

"Since I’ve been here, it’s the closest team we’ve had. Our group in that room, we’re all brothers. We kind of started winning at the beginning of the year and then the train just kept rolling and rolling, the snowball kept getting bigger. It’s kind of headed in a really good direction, and we like where it’s going right now."

Despite their move to the NCAA ranks, the Sun Devils still play at a small venue. A new 5,000 seat arena is in the works -- but for now, the Devils still occupy Oceanside Ice Arena in Tempe, which has a maximum capacity of 800.

But no one told the Sun Devils they weren't supposed to be this good this quickly.

"We’ve eliminated every excuse here at Arizona State. We do not have the best facility yet. We are an independent (program). We’re in our third full year (at the NCAA level). None of that matters," Powers said.

"We’re showing up to play every day and take it one game at a time. I know it’s cliché, but the guys have truly bought into that mantra and that focus, and it’s paid off."

Daccord, a third-year Sun Devil and Massachusetts native, heard some snickering when he announced his intentions to play hockey at ASU.

Rest assured: No one is laughing now.

"Most of the people kind of looked at me funny. They were like, 'What? Hockey out there?' And then on second thought, everyone was like, 'Wow, you might be the smartest college hockey player in New England,'" he said.

"It’s really cool to get that recognition. In my three years here, this is the biggest buzz we've ever created, and that was the goal when we started this whole thing -- to bring attention to our program and what we’re doing, and growing the game of college hockey, and it’s just really exciting."