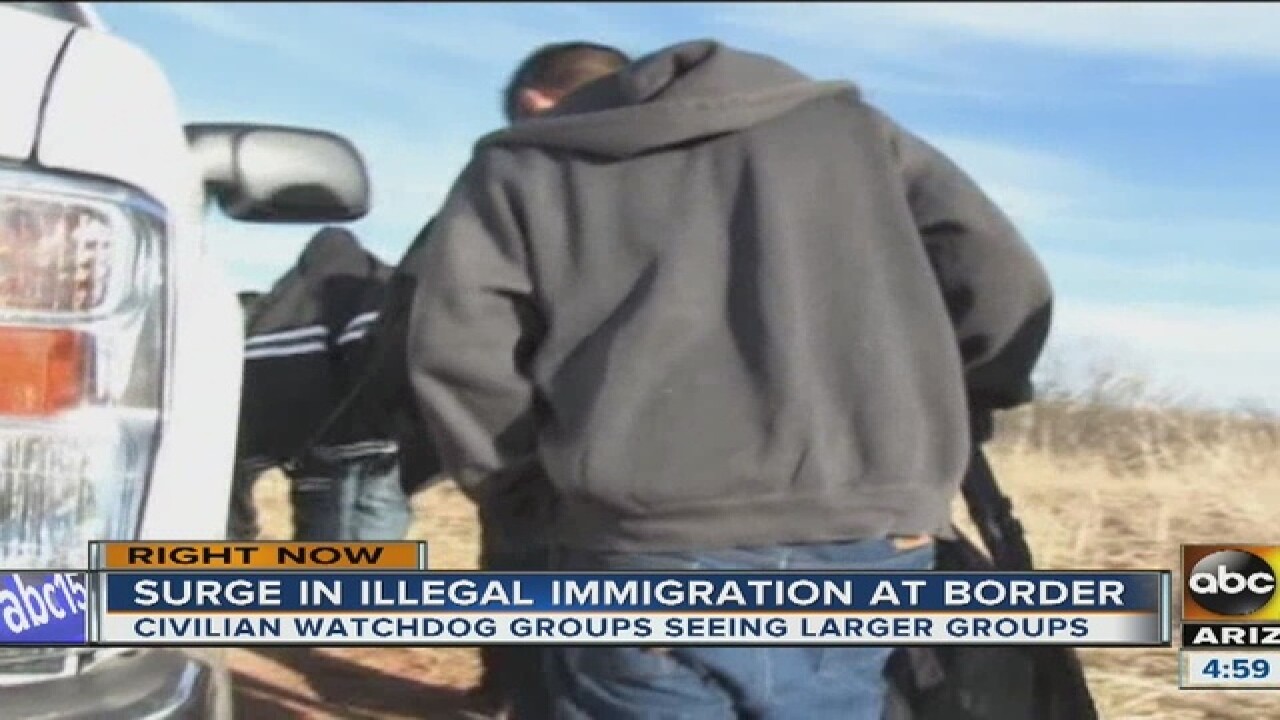 The Department of Homeland Security is dealing with a surge in the number of illegal immigrants trying to cross the border.

Earlier this week, the department transferred 150 agents -- dozens of them from Arizona to Texas -- to help process the number of Central American families and minors crossing the U.S. border.

Here in Arizona, civilian watchdog groups say the numbers also appear to be on the rise. The Yuma sector has been hit especially hard with an increase in the number of Central Americans illegally trying to cross the border.

He added that federal agents had been able to stop some of the large groups from crossing by using aerial support.

Civilian watchdog groups were hearing reports that illegal immigrants were being told by cartel members to get across before President-elect Donald Trump's inauguration and to tell border patrol agents they needed asylum.

"Asylum is a totally different deal then getting caught illegally. It brings a whole set of new legal things that have to take place," said Pressnell.

Another civilian watchdog group patrolling the desert was run by Tim Foley, with Arizona Border Recon.

Foley lived right on the Arizona-Nogales border and said not only was he seeing more groups of illegal immigrants trying to cross, but the groups were much larger.

"The groups used to be six guys now we're seeing through our cameras and hearing from border patrol, 30 plus guys," said Foley.

He added that the men they were encountering were not just Central Americans looking for a better life.  Many of them were drug mules, carrying narcotics.

CBP officials had reported busting three Pakistani men who were trying to sneak across the border last week.  Foley said he was not surprised.

ICE released a statement regarding the three Pakistani nationals which read in part:

Petra Falcon, with the immigrant rights advocacy group Promise Arizona, had spent 13 years running a shelter on both sides of the border.

She acknowledged that there were cartels and drug smugglers, but a majority of the people she encountered were those simply trying to re-connect with family in America or fleeing from poverty and violence.

"It's people who have walked for miles. They arrive at our shelter on the border with blisters. They have walked all night, walked in the heat in the cold, fearful that they would be picked up. Carrying very little, perhaps carrying a child," said Falcon.

While illegal immigrants hoped for a better life, and immigration advocacy groups hoped for tolerance and understanding, Presnell said their mission was national security and a safer America for all.

"Do it legally. We have a lot of countries, terrorists in this world who want to kill us. We need to know who is coming into our country. They can apply down there to come here on several different visas, but none of them take the time to do that," said Presnell.