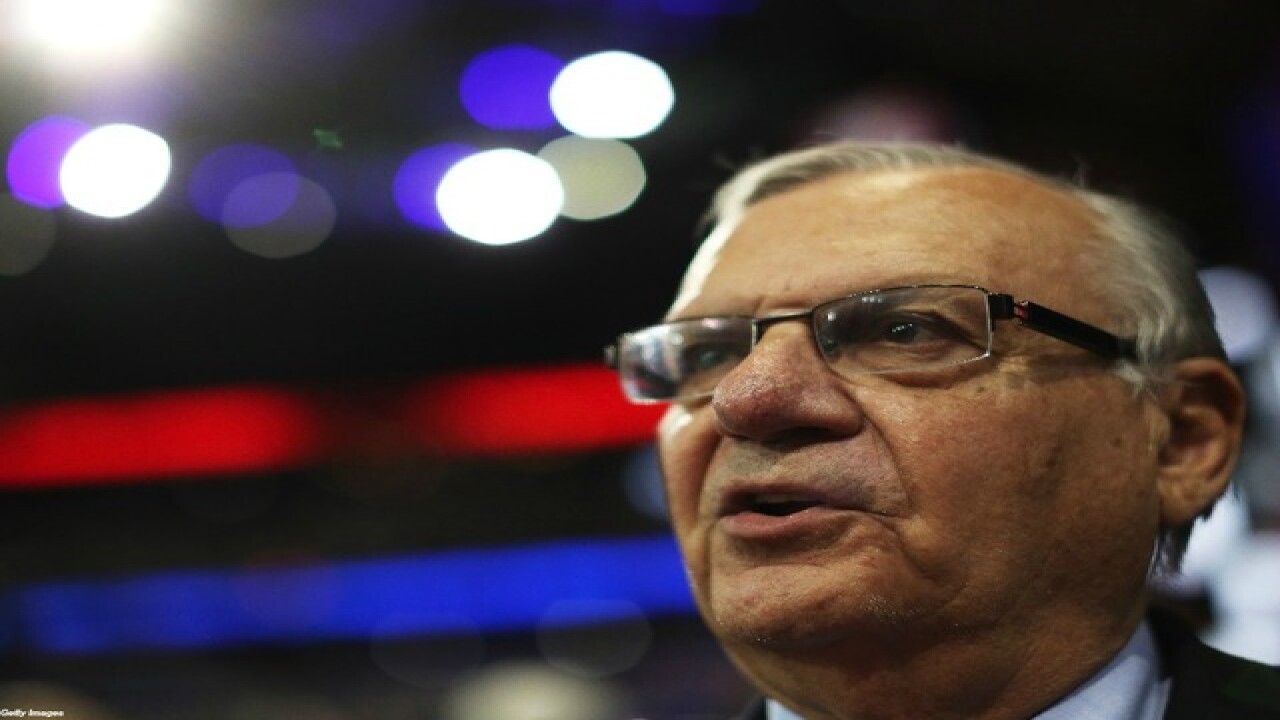 By: Jon Erickson, Associated Press
Posted at 3:48 PM, Sep 16, 2016
Maricopa County Sheriff Joe Arpaio came under new criticism Friday from a political foe for his investigation of President Barack Obama's birth certificate on the same day that Republican nominee Donald Trump relented on his claim that the president wasn't born in the United States.
Sheriff Joe Arpaio has long questioned the president's American citizenship, launching an investigation in 2012 that remained open as late as two months ago. He once sent a sheriff's employee to Hawaii as part of the investigation and earned praise from Trump for his efforts. Arpaio defended the investigation by saying people in the county had requested it.
His opponent in the November election attacked Arpaio over the investigation Friday, saying the volunteer posse members who conducted the probe could have been used in other ways that could have actually made the community safer.
"Here, he has a resource with a volunteer base and instead of using it for serious public-safety investigations, he is wasting it on nonsense," said Democrat Paul Penzone, a retired Phoenix police sergeant.

Arpaio, at a pro-Trump event Friday night in New River restaurant, said his investigation into President Obama’s birth certificate is ongoing. Asked if he agrees with Trump’s new statement on the president’s birth place, Arpaio said his inquiry is not into the birthplace, but the birth certificate.

“My [focus] has always been on a forged document,” Arpaio said.

Trump supporters ABC 15 talked with at the New River event said Trump's about-face on the birther issue does not affect their support for him.

The sheriff has said his volunteers found probable cause that the president's long-form birth certificate was a computer-generated fake and questioned whether a selective service card completed by Obama in 1980 was a forgery. No arrests stemming from the investigation were ever made.
Arpaio initially said no taxpayer money would be spent on the investigation and that it would be funded through donations to the posse. But he later promised to use the donations to reimburse the county for some costs after it was revealed that he had sent a sheriff's employee to Hawaii as part of the case.
The sheriff won praise in a 2012 tweet from Trump: "Congratulations to @RealSheriffJoe on his successful Cold Case Posse investigation which claims @BarackObama's `birth certificate' is fake"
The sheriff has never backed down from the investigation.
Two months ago, he said under oath in an unrelated deposition that the investigation into the birth certificate was ongoing. "And, by the way, that investigation is not done yet," Arpaio testified.
Arpaio has said the investigation was necessary because nearly 250 people tied to an Arizona tea party group raised forgery allegations about Obama's birth record.
Aides to the sheriff tried unsuccessfully to dissuade him from pursuing the investigation as Arpaio was facing a tough re-election campaign in 2012.
In the 2014 documentary "The Joe Show," then-Arpaio publicist Lisa Allen told the sheriff that pursuing the investigation he would make him "look like Bozo the clown."
"Good, let them call me a kook," Arpaio said in the documentary. "Let them do that. Add that one the list. Then we'll do a commercial on that."
Critics have accused Arpaio of launching the investigation to divert attention from his worsening legal troubles and improve his already impressive campaign fundraising.
Arpaio is facing the toughest campaign in his 23 years in office.
Three years ago, a federal judge concluded Arpaio's officers had racially profiled Latinos in regular traffic and immigration patrols. The judge asked federal prosecutors to bring a criminal contempt-of-court case against Arpaio for defying an order to stop the patrols.
Arpaio's support from voters has been waning in recent years, but his re-election bid is aided by $11 million in campaign fundraising during this election cycle. Much of the money comes from people living out of state.
Copyright 2016 Scripps Media, Inc. The Associated Press contributed to this report. All rights reserved. This material may not be published, broadcast, rewritten, or redistributed.