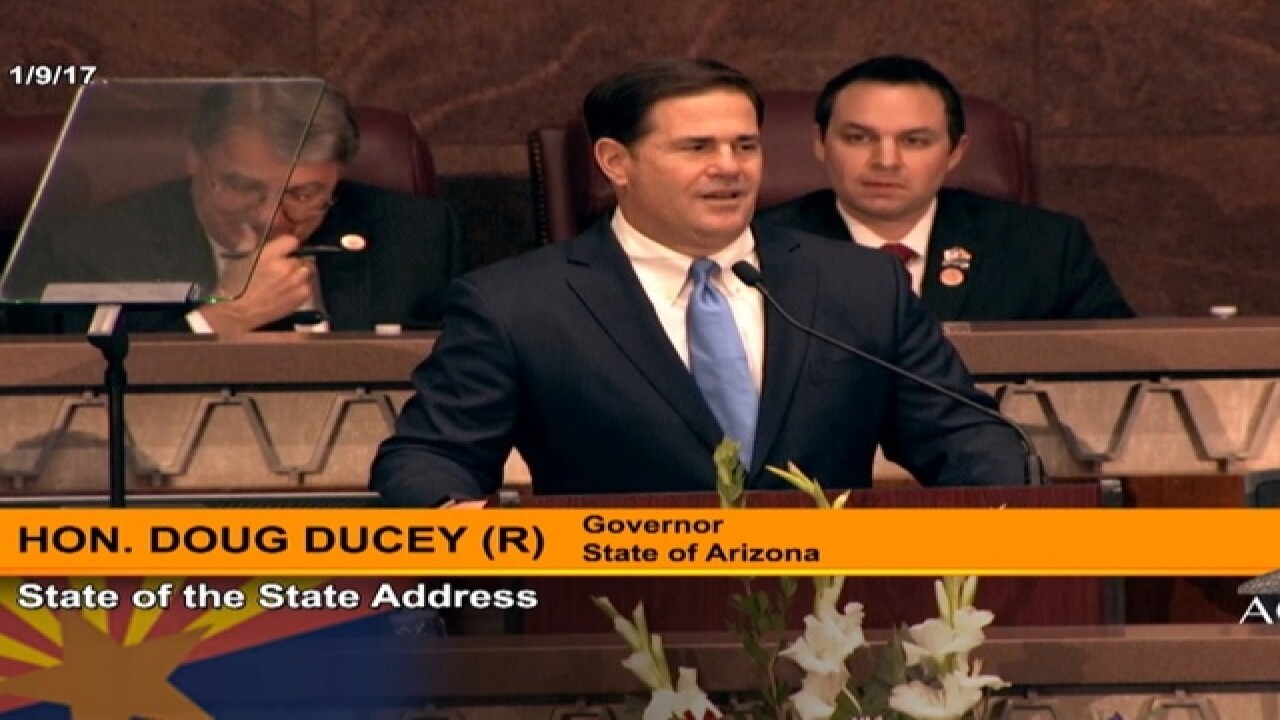 Gov. Doug Ducey on Monday called for a pay raise for all teachers, increased spending on all-day kindergarten and a signing bonus for new teachers who take jobs in poor areas, signaling that education will be at the top of his priorities during the upcoming legislative session.

The Republican governor outlined an ambitious plan for education that includes everything from raises to providing free tuition at state universities for prospective teachers, but he provided no details on how he is going to pay for the changes.

Ducey will have a relatively small amount of available money -- the Legislature's budget analysts estimate it at $24 million -- to spend because he wants to cut taxes at the same time.

"I want the teachers of our state to know: You make the difference. I value your work, and it's time we return the favor," Ducey said. "I have a commitment our educators can take to the bank: starting with the budget I release Friday, I will call for an increased investment in our public schools -- above and beyond inflation -- every single year I am governor."

Teacher salaries would go up by about 2 percent over several years, Ducey's office said. That would be a $1,000 raise for a teacher making $50,000.

The governor also said in his State of the State address that he wants the Legislature to approve licensing fee waivers for low-income Arizonans who complete technical training, and an additional year of general relief welfare checks for people actively seeking work or caring for children who regularly attending school. That would restore benefits for some to the two years available before Ducey cut Arizona benefits to the lowest in the nation, at one year, in 2015.

The fee waiver and welfare increases are designed to reward people who are actively looking to get off government assistance programs.

"All too often government incentivizes being out of a job - rather than getting a job," Ducey said. "So why not reward those who are making an honest effort to get off unemployment, or food stamps, or welfare."

The education proposals come as the governor has been under pressure to boost funding for schools beyond what they got in last year's Proposition 123. That measure adds more than $300 million a year in cash for K-12 schools for the next decade but still leaves Arizona schools near or at the bottom in terms of school funding nationally.

Ducey hasn't said how much money he thinks he has to spend on the initiatives announced Monday. The Legislature's budget analysts say there's about $24 million in available surplus for new initiatives, a figure the governor said last week doesn't match his office's projections. But he promised to increase spending this year and each year he's in office above what's required to cover inflation on education.

"Now, I'm not promising a money tree," he said. "I can't. There's no pot of gold, or cash hiding under a seat cushion. And unlike Washington, we don't print money, and we won't raise taxes."

He laid out 15 new or expanding education programs, buoying the hopes of education advocates, but raising questions about how he'll fund them.

"I think the governor did a good job outlining steps, and we'll see what that all entails," said Rep. Doug Coleman, R-Apache Junction, who's pushed for more K-12 school funding. "I'm excited to see his budget."

Democrats were also pleased with the education agenda, but wary of whether Ducey can pull it off.

"If he's serious about giving adequate dollars to any of those 15 steps that he promised then I guess the devil is in the details, and I'm anxious to see his budget on Friday," said Rep. Rebecca Rios, the Democrats' minority leader. "The fact is we only have $24 million, he's promised more tax cuts every year he's governor, he's promised not to raise taxes.

"So the math just doesn't add up, which leads me to question of those 15 steps, who's going to benefit," she added.

The governor renewed his call for the 9th U.S. Circuit Court of Appeals to be broken up, a high priority for Republican western officials who view the court as too liberal. He cited other reasons last year, including the court's extreme caseload, large geographic area and high rate of cases overturned by the U.S. Supreme Court.

"Arizona, and other states in the 9th Circuit, deserve better," he said.

He also borrowed a line from president-elect Donald trump by saying Washington, D.C., "isn't the only swamp that needs draining." He cited the number of lobbyists who descended on the Capitol last year while he was pushing an effort to consolidate boards and commissions. He ordered the commissions to fire those lobbyists after the session ended.

Ducey also is calling for an expansion of a program that lets new mothers who work for the state bring their children to work. He called the program a "win-win-win because it boosts productivity, cuts turnover and leads to happier babies."

Ducey also promised new cash to complete the elimination of a backlog in rape kits. That effort was started last year.

"My budget fully funds the testing of all remaining rape kits," he said. "And with the recommendations of our task force, we are ready to move forward with legislation requiring all future kits to be tested."

Board of Regents President Eileen Klein statement on Ducey's address:

"On behalf of the Arizona Board of Regents, I applaud Governor Ducey's prominent focus in his State of the State address today on economic opportunity through public education – from early learning through college. K-12 and higher education are intertwined, and Arizona's public universities will benefit from a stronger K-12 pipeline.

"Of course, there is no more powerful force than a great teacher when it comes to lifting the lives of students - and this initiative gives our universities an opportunity to build upon the great work we're already doing to educate and train teachers. The governor's innovative Arizona Teacher's Academy will encourage more people to study, train and teach in Arizona. In accordance with Governor Ducey's announcement, we look forward to collaborating with the governor, legislators, our university presidents and community college leaders on the details necessary to make the Arizona Teacher's Academy a reality.

"More broadly, research demonstrates the value of higher education for students and the economy. On average, Arizonans who earn an undergraduate or graduate degree earn more - significantly more - than their peers with a high school diploma alone. That's why education, business and community leaders across Arizona spearheaded the Achieve60AZ initiative to boost the number of Arizonans who earn a post-secondary degree or certificate, and we thank Governor Ducey for his continued recognition.

"Finally, it's clear our public universities are on the right track. Graduation rates are up. So is student achievement and preparedness. Our university campuses are becoming economic hubs for technological transfers and business startups. This is all great news, and we look forward to working with Governor Ducey and legislators to ensure continued momentum for Arizona's system of public universities in the coming year."