Did Arizona Treasurer Jeff DeWit advocate violence against members of the media? 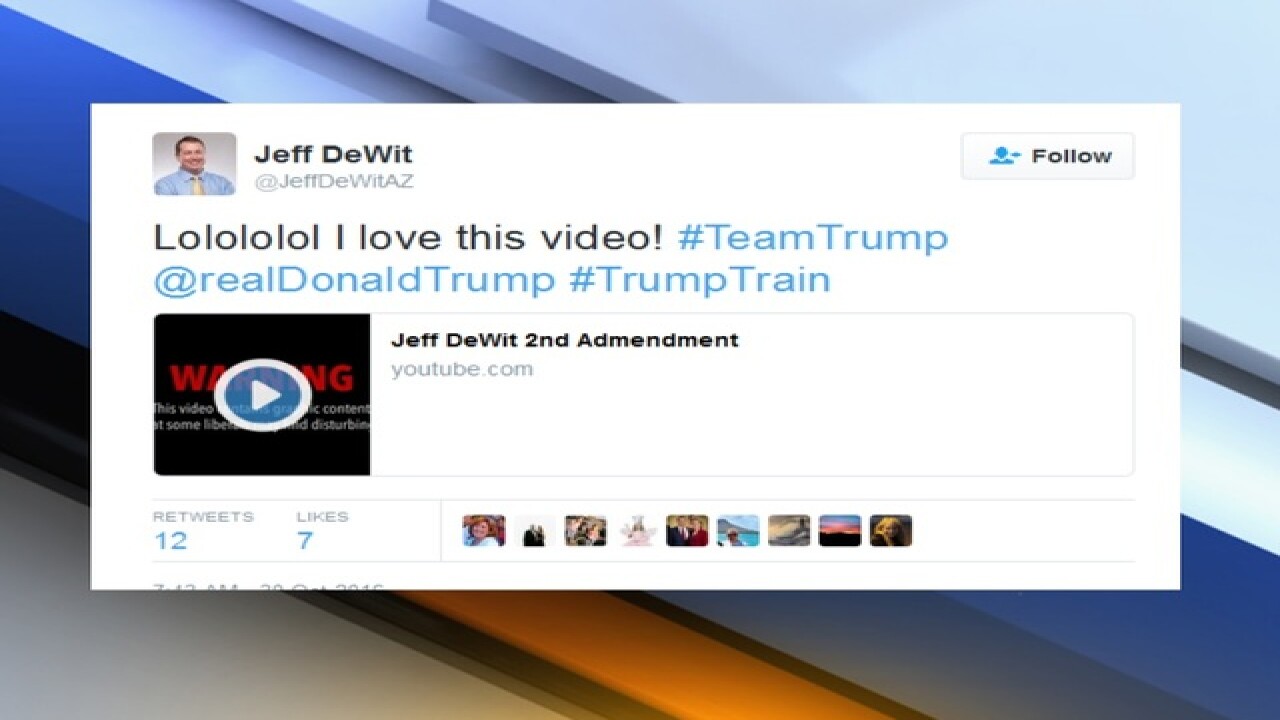 Advocating violence or a harmless joke? That's the question after Arizona's State Treasurer shared a controversial video over the weekend on social media.

The video makes reference to Second Amendment gun rights and exercising those rights against members of the news media.

The 40-second clip, which has since been removed from YouTube, shows DeWit on-stage at the Phoenix Convention Center and a woman bringing him a t-shirt cannon as he makes reference to gun rights.

After firing the t-shirt cannon in the direction of the media, the video uses graphical effects to make an explosion sound and dissolve to television screen color bars.

The video then shows a famous clip from the movie 'Scarface' where Al Pacino uses a grenade launcher and assault rifle to kill several people while screaming, "say hello to my little friend!"

The video ends with DeWit firing another t-shirt, complete with more explosion graphics, and a statement on screen that reads, "No liberal media were harmed in the creation of this video."

After reaching out for comment, DeWit told ABC15 he is not affiliated with the video, which was posted to YouTube by an independent production company, and that he has since deleted his tweet where he wrote, "Lolololol I love this video!"

"The last thing I'd ever want anybody to think is that I was advocating violence against anybody... seriously not the case," said DeWit. "To me, I'm just shooting t-shirts out of a cannon, and it seems like harmless fun."

He went on to say that he "highly respects" what the press has done.

ABC15 also reached out to the production company that created the video, Epic Light Media. The person we spoke with over the phone wouldn't give us his name but said the clip was made for fun and had been meant only for DeWit's private viewing. The spokesperson also said the video was removed as soon as they realized that DeWit posted it to the public.

“I think it's absolutely dangerous, they are revving people up, they're almost inciting violence,” he said. “That’s just not the way we should have our political arguments play out.”