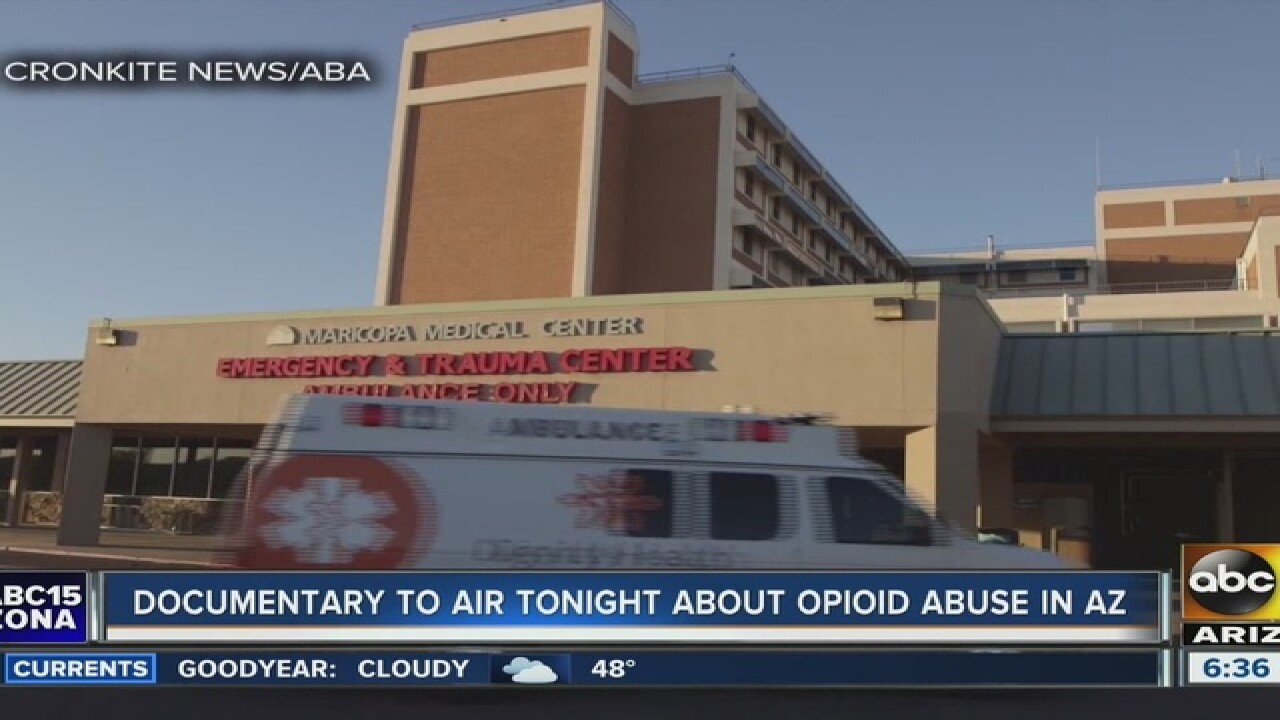 Arizona State University's Walter Cronkite School of Journalism and Mass Communication and the state of Arizona are teaming up to put an end to prescription opioid abuse.

The Cronkite school's newest documentary "Hooked Rx: From prescription to addiction" aired on Tuesday, Jan 10 on every broadcast TV station in Arizona. Spanish channels will air the 30-minute documentary began at 5 p.m. and English channels aired at 6:30 p.m.

Most radio broadcast stations will also air the feature.

"Hooked Rx" is a follow-up to the first documentary "Hooked" which aired in 2015.

Opioid abuse, including prescription abuse, has had devastating effects across the country and right here at home.

In an effort to end the abuse, a call center with 100 professionals will be open with the airing of the documentary for those who need help, advice and the nearest treatment center. The call center will be open from 5 to 8 p.m., or until calls slow down.

The call center is said to utilize Arizona's first statewide substance abuse treatment provider locator developed by the Arizona Substance Abuse Partnership in collaboration with the Governor's Office of Youth, Faith and Family.

Hundreds of people called the hotline when the first Hooked documentary aired in 2015.

"We kind of looked at the old site and we were like, 'Okay - what can we do this time?'" explained Hannah Flores, who helped design the new 'Hooked RX' website.

Flores is a part of the new batch of students that are looking to up game when it comes to sparking change.

"It takes them step-by-step," Flores explained. "That way their also getting this information and not leaving without any thinking, 'What's next? What's the next step?'"

And even prior to the second documentary airing Tuesday night, Governor Doug Ducey announced in his State of the State that he wanted doctors to be trained in drug-addiction before prescribing.

"They [the students] see that sort of impact when Doug Ducey responds on Twitter - when he mentions something in his State of the State address that has to do with prescription addiction, we know that that is, at least in small part, due to our efforts. So, that says a lot to our students," explained Assistant Dean Mark Lodato.

And for Flores, this project has been a labor of love, but one that she believes is worth it for the community.

"A lot of time and effort went into building this site and it's good to know that it's going for a good cause," Flores said.

To use the Arizona substance abuse provider locator yourself and get more information, click here.
Copyright 2017 Scripps Media, Inc. All rights reserved. This material may not be published, broadcast, rewritten, or redistributed.