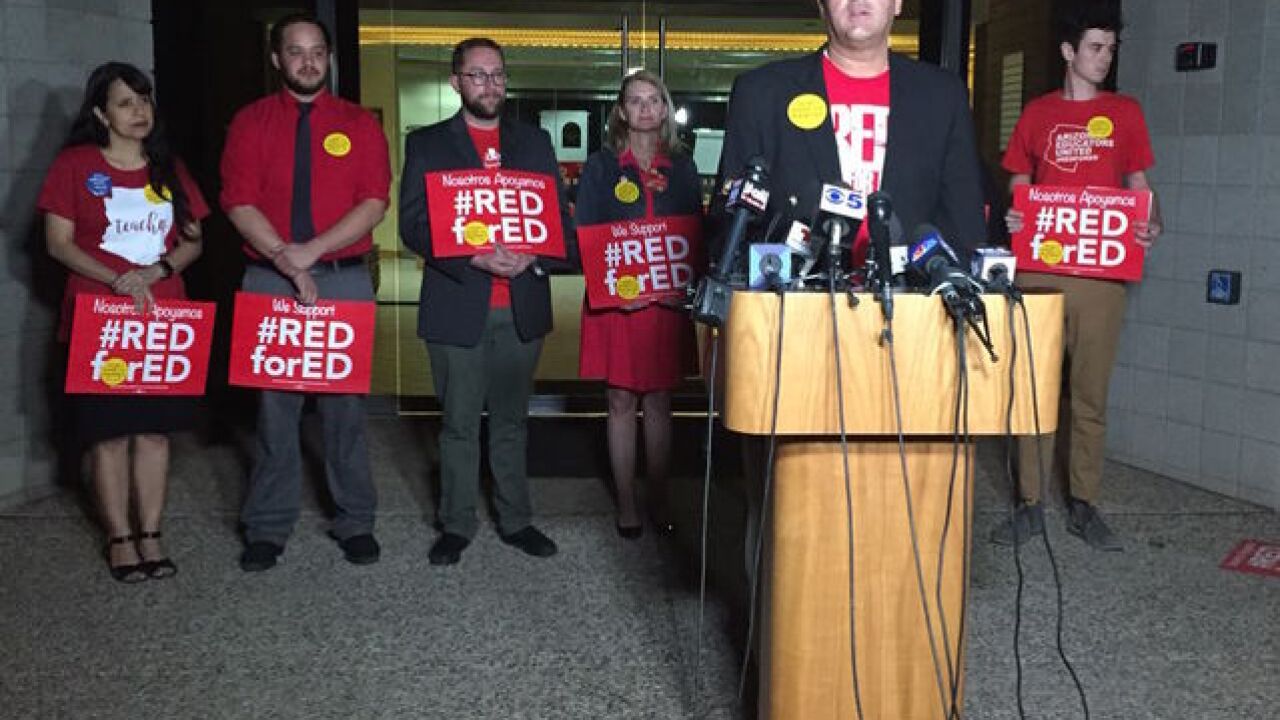 Arizona teachers have officially voted to stage a walkout starting next Thursday.

Leaders say the walkout starts Thursday in order to give districts and parents time to prepare.

A grass-roots group overseeing the vote on whether teachers should walk off the job announced the results Thursday night. The vote follows about six weeks of mounting protests to demand increased funding for public schools and an offer by Republican Gov. Doug Ducey to boost teacher pay by 20 percent.

"The worst possible thing we could do is not take action right now," said Noah Karvelis, an organizer for Arizona Educators United. Around 57,000 teachers submitted ballots and 78 percent voted in favor of the walkout, according to the Arizona Education Association.

Teachers on both sides of the walkout vote have shared concerns.

It could pose child care difficulties for thousands of families and leave teachers at risk of losing their credentials. How a strike could play out in more than 200 public school districts will vary, but could leave hourly workers like custodians without their paychecks.

Beth Simek, president of the influential Arizona PTA, said she feels the pain of teachers who are torn. Some are concerned about the effect on support staff and what kids might do without school, she said.

"I know they're toiling with that," Simek said. "I also know they need these raises."

Parents and communities already have been making plans for child care, with some stay-at-home parents stepping up to watch children so other parents can work, she said. Local parent-teacher associations also are putting together food boxes for kids who rely on free breakfast and lunch at school.

"There's been a lot of mobilization by the community to prepare," Simek said.

The vote in Arizona came after Ducey's pay raise plan didn't address other demands, including more overall school funding. Some walkout supporters say they want to send a message that other workers, such as bus drivers and receptionists, should get raises, too.

Governor Doug Ducey responded minutes after the announcement on Twitter:

No one wants to see teachers strike. If schools shut down, our kids are the ones who lose out. We have worked side by side with the education community to develop a sustainable plan to give teachers a 20 percent raise by 2020. (1/2)

I am committed to getting teachers this raise and am working to get this passed at the Legislature. We need teachers teaching, and kids learning. (2/2)

RELATED: Teacher salaries in Arizona: See how much each district pays teachers

More than 1 million students in Arizona go to public school in more than 200 districts, which have varying walkout plans. The state's largest, Mesa Public Schools, has said it would close and hourly staffers would not be paid.

The teachers told ABC15 that Ducey's 20X2020 salary increase and school funding plan does not meet all five demands of Arizona Educators United, the teacher's grassroots group. They are especially concerned about the absence of dedicated money for school support staff raises.

"It's a whole community. It's a whole village that makes it work," teacher Dave Dundas said. "If you just pay the teachers, it's kind of going to put a division between us."

"We don't want to let our parents down and our families down," theater teacher Teresa Minarsich said, "But if we don't do this now, there is no better opportunity or momentum."

The Dysart School District west of Phoenix said it would "make every effort" to avoid closing schools," but they would have to shut down if too few staff members show up, Superintendent Gail Pletnick has told parents.

See a complete list of plans we have so far received from Valley districts HERE.

The grass-roots organizing group Arizona Educators United on Wednesday reserved space at the state Capitol for Friday and for four of five days next week for rallies.

The first statewide walkout is complicated by the possible fallout in this right-to-work state, where unions do not collectively bargain with school districts and representation is not mandatory.

The Arizona Education Association, which supports the grass-roots campaign and helped announce the vote results, previously warned its 20,000 members about a 1971 Arizona attorney general opinion saying a statewide strike is illegal under common law and participants could lose their teaching credentials.

Arizona is one of several Republican-dominant states where teachers have demanded higher pay this year. The movement started in West Virginia, where a strike garnered a raise, and spread to Oklahoma, Kentucky and most recently Colorado.

Governor Ducey's proposal has received some support, but others are concerned about finding the money to cover its roughly $650 million cost when fully implemented.

Republican state House Speaker J.D. Mesnard said lawmakers widely support a 20 percent raise, though there's no agreement on how to fund it.

"The broad consensus is, 'We want to see a pay raise,"' he said. "Right now, it's a lot of number crunching, a lot of discussions ... it's all centered around, how do we make this a reality?"

Mesnard had previously said a walkout is a "risk" that could backfire by depleting community support. Many in the public may consider 20 percent a big raise, he said.

"There's no doubt that a teacher walkout would have a negative impact on families," he said.

Arizona Red for Ed movement leaders has established a GoFundMe if you would like to donate to help their cause.

Take a look at the map below for each district's plans to handle the walkout. School districts in red have responded to requests for plans. See a complete list of detailed responses we have received from Valley districts HERE.