Some national forests around Arizona are starting to announce temporary closures amid wildfire danger concerns.

Tourists and the residents of Arizona mountain towns that rely on them won't have access to parts of some national forests this summer as authorities attempt to prevent wildfires during a critically dangerous time.

National Forest System Road 583 from State Highway 87 will remain open for access to Tonto Natural Bridge State Park.  The Tonto Creek and Canyon Creek Fish Hatcheries operated by the Arizona Game and Fish Department will be closed for public access.

Apache-Sitgreaves National Forests announced Wednesday that some areas will be closed to the public, although officials haven't yet decided which ones. That's after the Kaibab National Forest on May 11 announced the closure of about 23.4 square miles (6,070 hectares) centered on Bill Williams Mountain near Williams. That closure is intended to protect the watershed for Williams, a northern Arizona city that's a jumping-off point for many visitors to Grand Canyon National Park.

Forest officials said the last full closures of the Apache-Sitgreaves and Kaibab forests were in 2002, while the adjacent Coconino National Forest last had a full closure in 2006.

Campfire bans and other restrictions are in effect at national forests in most of Arizona and neighboring New Mexico, two drought-stricken states where a lack of precipitation has led to numerous fires in recent years.

On Friday, May 18, the Coconino National Forest announced temporary closures to six large areas to public access starting May 23 due to potential fire dangers and for public safety. The following areas are impacted by the closures: 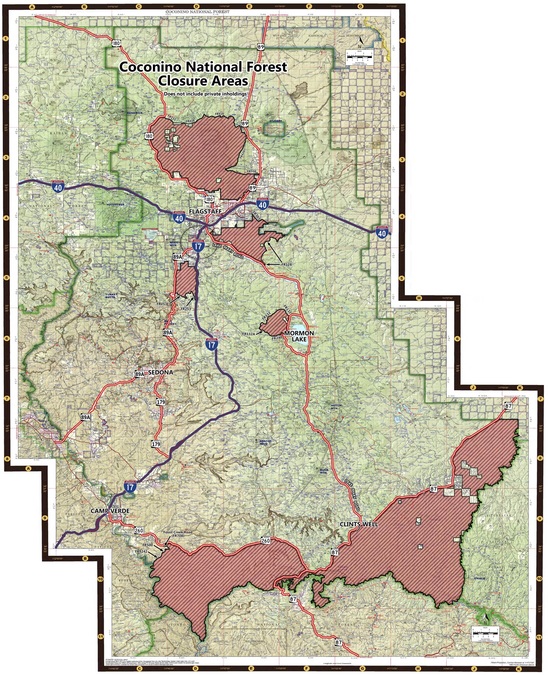 Coconino Forestry officials said people with permits to Fossil Creek during the closure will be refunded and will need to reschedule their trips, and apply for a new permit, once the closures are lifted.

Earlier in May, the Viewpoint wildfire near Chino Valley burned more than 5,600 acres and destroyed two homes, 12 structures, four RV travel trailers, and six vehicles before crews were able to fully contain the fire.

The Tinder Fire, which started April 27 near Happy Jack, continues to burn within containment lines that forced the evacuation of about 600 people from 1000 homes within the area. That fire has burned more than 16,000 acres, destroyed 87 structures, and is only 79 percent contained.

Forestry officials have been able to determine that both wildfires were human-caused.

While forest closures in Arizona might result in fewer visitors to the towns within the mountains, many residents are supportive.

"I'm sure there's some impact there, but I think we're better off to have a little bit of impact than have our town burn down up here," said Show Low City Manager Ed Muder. The city is in the Apache-Sitgreaves National Forests, which include the Mogollon Rim and the White Mountains.

Both forested regions, which include many campgrounds and lakes, serve as havens for residents of Phoenix and other desert cities looking to escape the summer heat.

RELATED: Five ways to protect your home from brush fires

What areas will be closed will depend on considerations such as fuel conditions, possible evacuation routes and likely directions of wind that would drive wildfires, Simmons said.

The Kaibab's closure of the area near Williams affects local residents, including some whose property backs up against the mountain.

But the town still sees enough activity from tourists to get by, Mayor John Moore said.

"That particular area is critical because it is our watershed, so we try to protect it," Moore said.

Forest fuels, the slope of Bill Williams Mountain and other terrains would make firefighting difficult, she said. The area also is popular with hikers and campers, as well as locals who regularly set out on trails nearly in their backyards.

"For us, it was really critical for us to close that area to any entry or recreation use. A fire starting at the base of the mountain could lead to enormous and long-lasting impacts to Bill Williams and the watershed," Banks said.

"That means no entry, people cannot enter the forest," she said. "People often hear `forest closure' but don't often realize all the implications of that."

Fines and punishments for violating fire restrictions and closures: