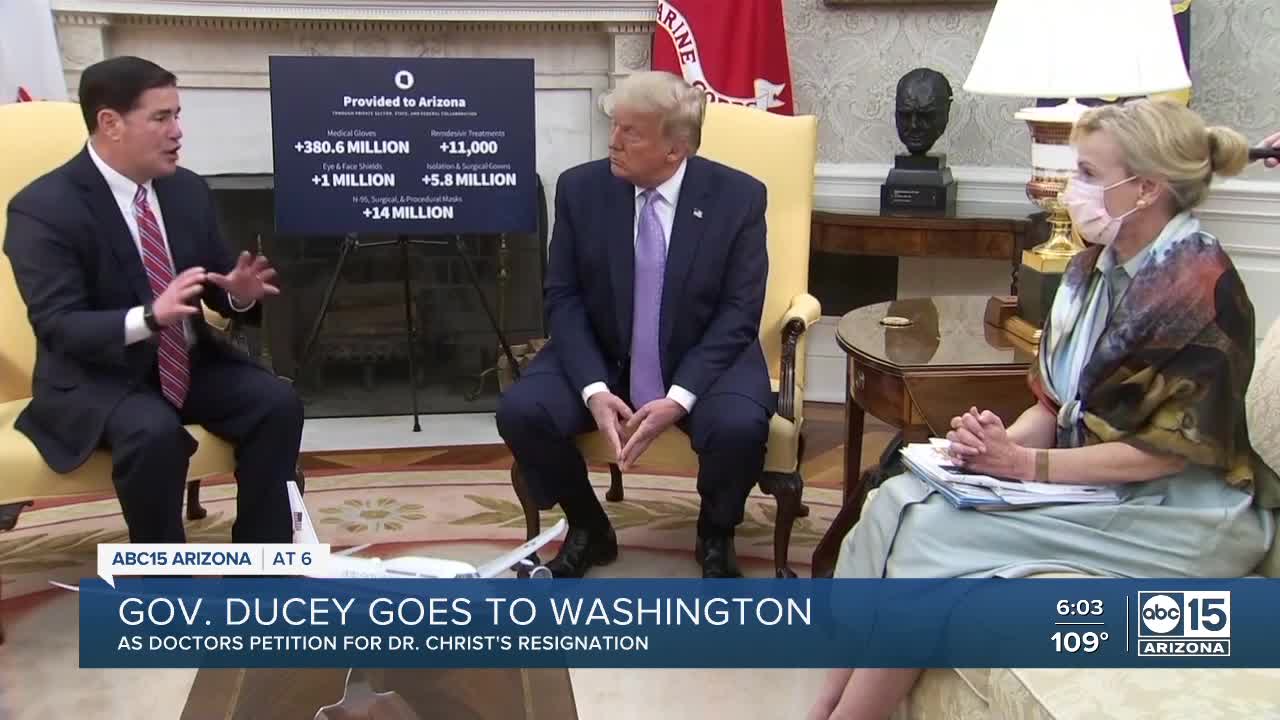 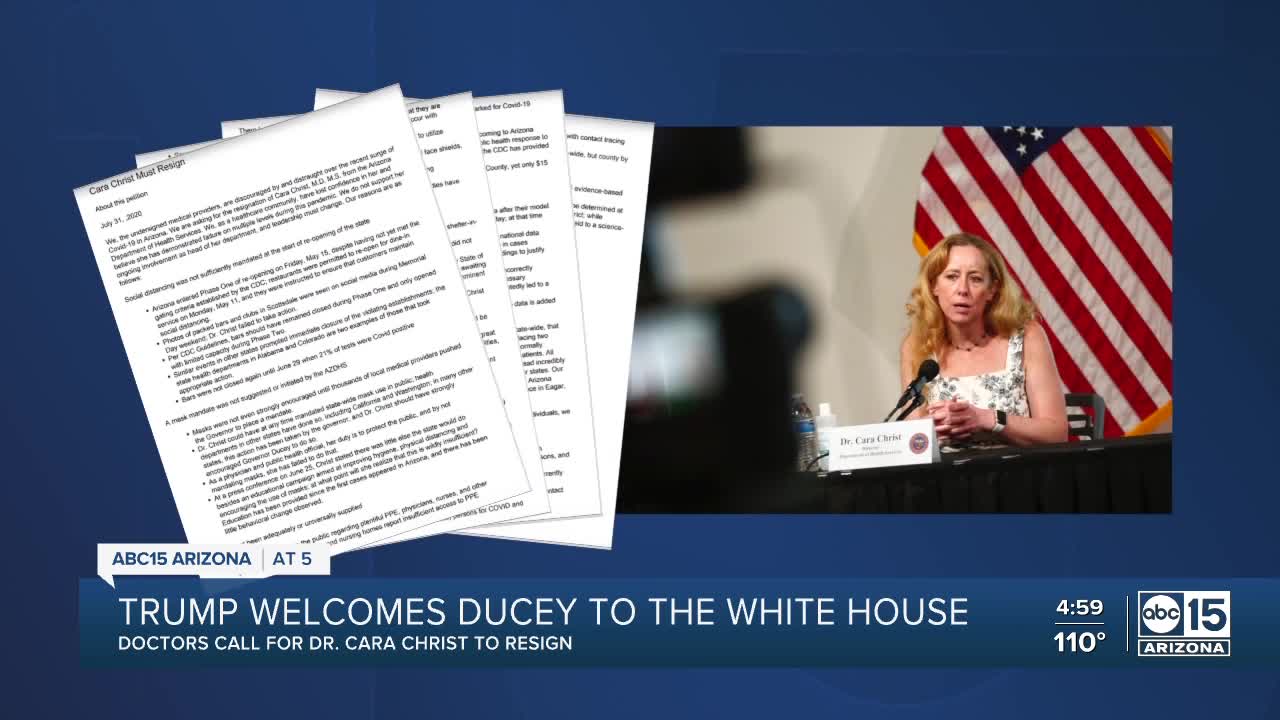 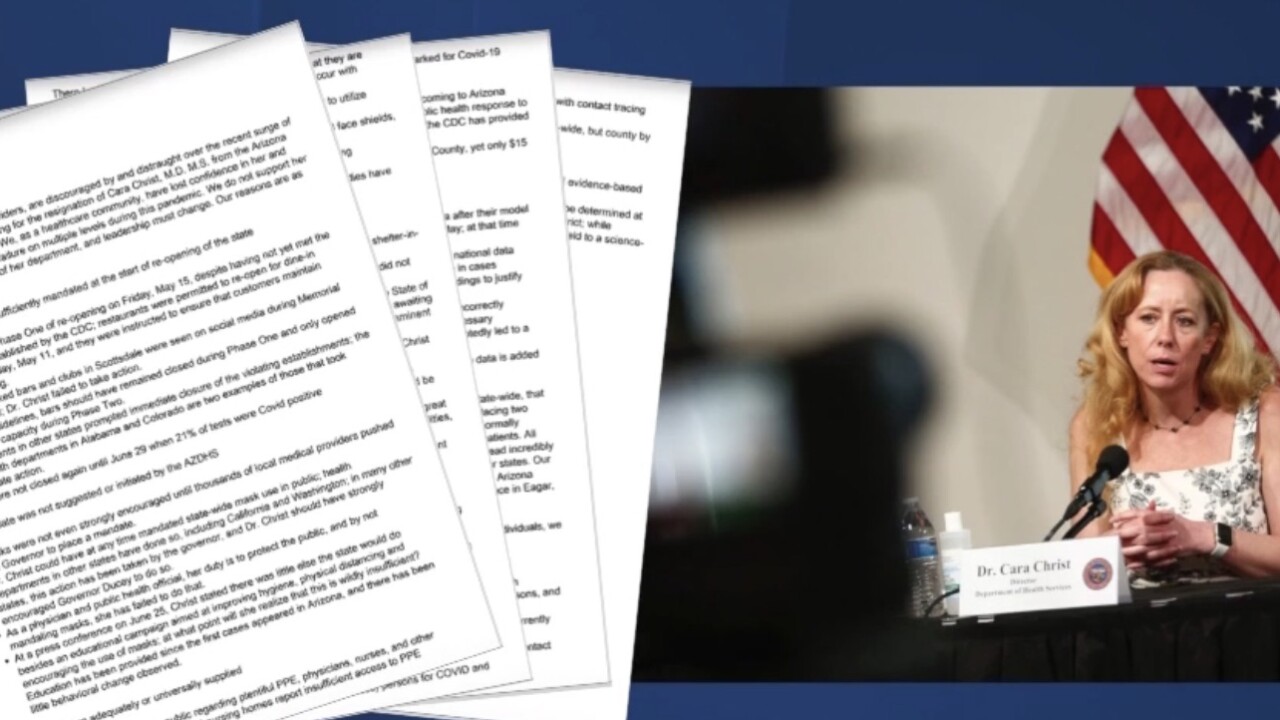 “We, as a healthcare community, have lost confidence in her (Dr. Christ) and believe she has demonstrated failure on multiple levels during this pandemic,” the letter reads. The four-page letter is followed with more than 20 pages of names of medical providers that support the call for the resignation.

“We do not support her ongoing involvement as head of her department, and leadership must change.”

The reasons listed include: social distancing was not sufficiently mandated at the start of the re-opening of the state, a mask mandate was not suggested or initiated by the AZDHS, PPE has not been adequately or universally supplied, testing for COVID-19 was not organized and performed as promised, contact tracing is insufficient and requires more transparency and data provided to the public has been questionable at best.

The calls for Dr. Christ’s resignation on a day when Governor Doug Ducey is in Washington, D.C. meeting with President Donald Trump.

ABC15’s news partner Newsy spoke to Governor Doug Ducey and asked him why he is there and not Arizona as educators and parents seek clarity for reopening schools and districts await decisions on benchmarks that are expected this week for in-person learning.

“The first thing we want is to have a strong partnership with this White House and this is what they've delivered to Arizona,” Ducey said. “We think the steps that we took in June, to mitigate the spread and to turn the tide, how what was rising cases, rising hospitalization ICU, emergency room in a much different direction is really a model that other states can apply. So I want to thank the President for what's been provided. And we also want to acknowledge that this partnership is working, and everyone should be using these steps, why do that in person instead of virtually, we want to not only make certain that people understand the steps, but that Arizona has the resources necessary, going forward, that's where we've been today.”

A spokesperson for Ducey’s office said in an email that they were not aware of the letter calling for Christ’s resignation.

“She is one of the most qualified health professionals in the country and has worked tirelessly since the start of this pandemic to protect public health and save lives. We are lucky to have her as part of our team and have 100% confidence in her,” the statement read in part.

The letter from medical providers ends with, “We will not be silent. Lives are at stake. Signed with determination and resolution.”