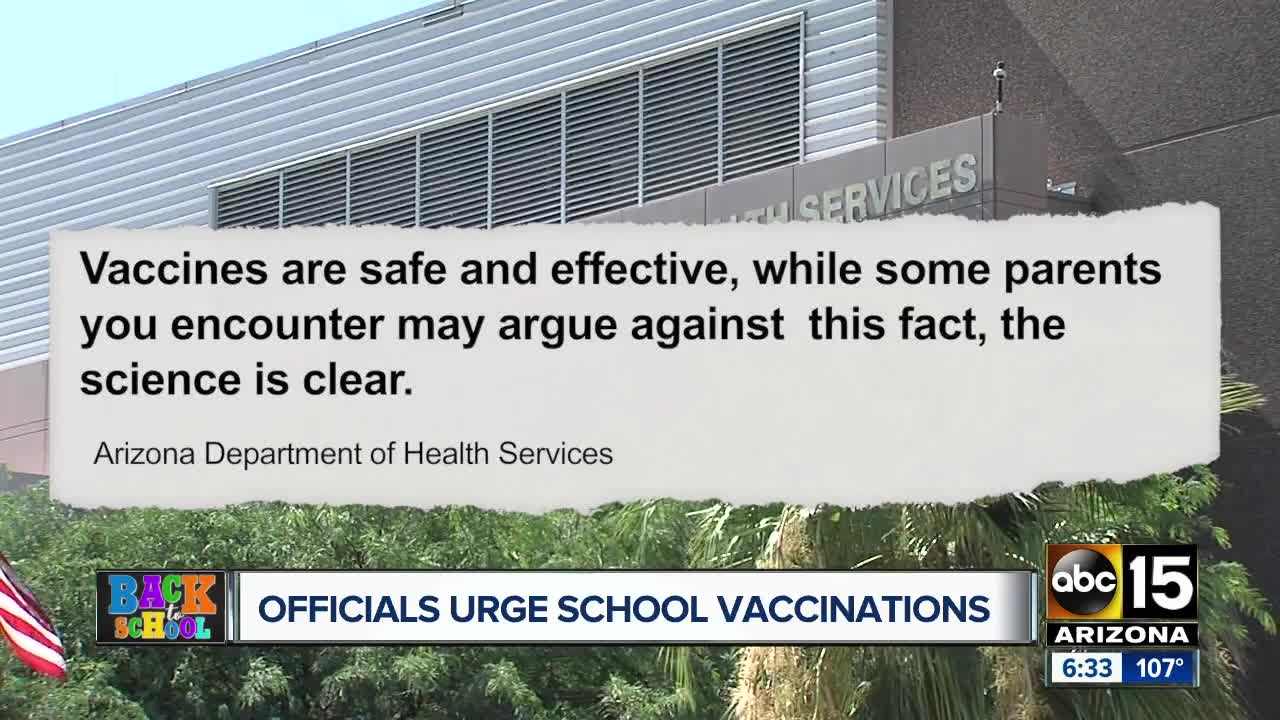 The Arizona departments of health and education sent a letter to every school in the state making sure as many students as possible are vaccinated.

PHOENIX — In Arizona, parents have the choice to avoid immunizations and still be allowed to enroll their child(ren) in a public or charter school.

Arizona state law allows the parent or guardian to fill out an 'exemption form' and cite either personal belief, medical belief, or philosophical belief as to the reason for the exemption.

In recent years, more and more parents are opting to use an exemption. According to data from the Arizona State Health Department, since 2000, personal belief exemption rates in kindergarten have quadrupled, increasing from 1.4 percent to 5.9 percent, and from one percent to 6.1 percent in sixth grade.

That means there are less vaccinated kids in schools.

"So we thought the partnership between the Department of Health and Education would be great for reaching out to the administration and front office staffs at the schools," said Dr. Cara Christ, Director of Health and Human Services for Arizona.

Dr. Christ says it's the first letter of this type she has ever sent to the public schools in Arizona in conjunction with State Superintendent Kathy Hoffman.

"We know we are experiencing an increase in measles cases in the U.S. So we want to have that information ready because measles could come at any time," she adds.

The letter dated July 16, is authored by both Hoffman and Christ. It reads in part, "..Vaccines are safe and effective. While some parents you encounter may argue against this fact, the science is clear: vaccines are among the most studied medical products in the world and are continuously monitored for safety and effectiveness."

Dr. Christ says one important fact that parents who opted out of immunization may not fully comprehend is that in case of an outbreak at a school, an un-immunized child will have to be at home and not allowed in school for 21 days.

"I don't know that a lot of parents understand that they will be responsible for caring for that child; that's three weeks, a long time to be out of school especially if you are working parent," she added.

The time out of school could be even longer if another case is diagnosed at the school.

"If another case shows up at the school, it starts the 21 day period over so that it could be 21 days or it could be longer," said Dr. Christ.

Representative Kelly Townsend (District 15) told ABC15 she read the letter that was sent out to administrators and health office staff at all schools.

Through a prepared statement, she told ABC15: "I'm supportive of encouraging the following of the law regarding vaccinations in school but would have liked a balanced emphasis to include honoring parental choice."

It is important to mention the letter sent out to districts does not change the parental choice that is prescribed through the state law.

Dr. Christ adds the message sent out to schools is being done on a proactive approach to help avoid an outbreak and keep as many kids as possible immunized.

"We know we are seeing decreased immunization rates in our school-aged children," she adds.

Below is the cited data obtained from the Arizona Department of Health: