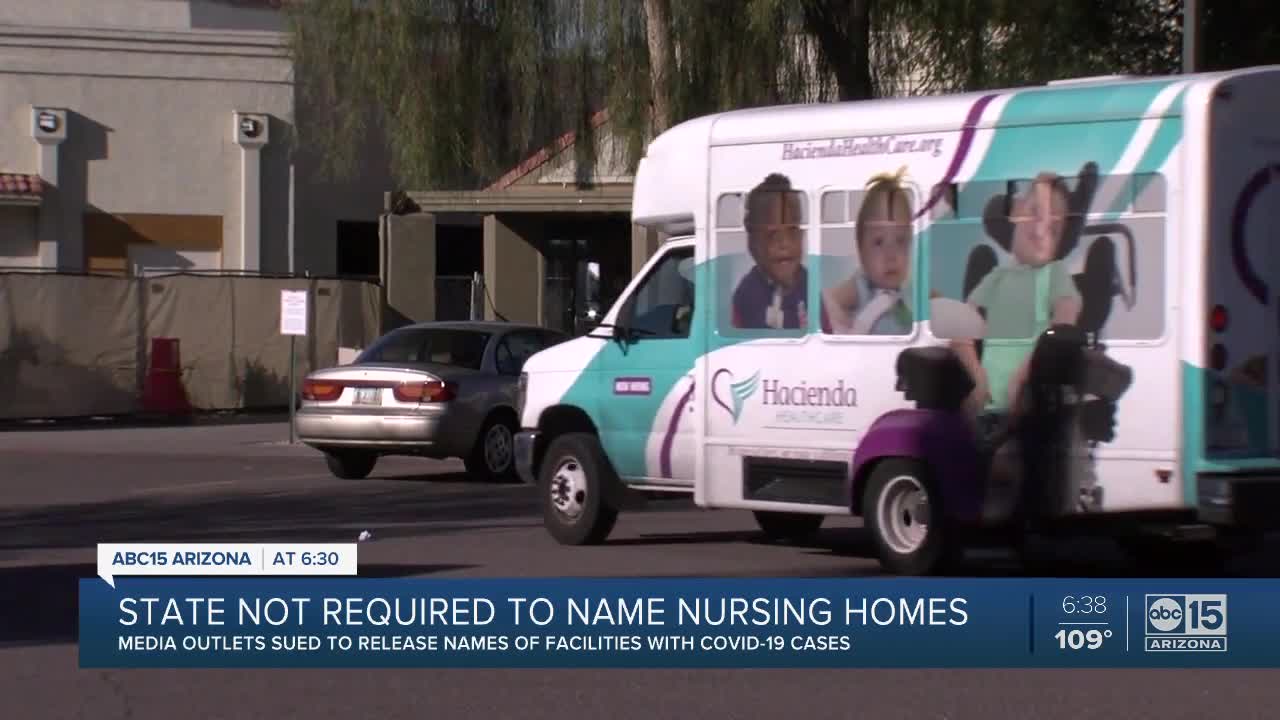 Judge rules Arizona is not required to release data about coronavirus cases in care facilities, despite a media lawsuit.

PHOENIX — Arizona state health officials can keep the names of long-term care facilities with coronavirus outbreaks confidential, according to a ruling issued Friday by a Maricopa County Superior Court judge.

In early May, news organizations in Phoenix, including ABC15, filed a joint lawsuit to compel the state to release information on which Arizona nursing homes and other long-term care facilities contained one of more patients with coronavirus. The news organizations did not seek specific patient names.

In his written decision, Judge Christopher Coury said there was a conflict of law between public records, private health, and business information. He added such conflicts needed to be clarified by the legislature, not judges.

As a result, he ruled in favor of state officials who resisted the release of the information.

Reporters had repeatedly asked for state government officials to release the long-term care information under the Arizona public records laws. Lawyers for the media organizations argued the public had a right to know because hundreds of nursing home residents have died, and thousands more could be at risk for contracting the virus.

State officials refused to give out the facilities' names, citing a variety of reasons. Private-practice lawyers, hired to represent the state, told the judge state laws made some communicable disease-related information confidential, as well as protected personal health information., including home address. They claimed releasing the coronavirus-infected locations could also harm long-term care facilities’ business and competitive positions.

Lawyers for the media organizations argued the public had a right to know the locations because hundreds of nursing home residents have died, and thousands more could be at risk for contracting the virus. According to the judge's decision, confidential communicable disease information could be released only if there was a “clear and imminent” danger that creates a “compelling” need. Since the governor now requires long-term care facilities to release outbreak information to relatives and patients, the judge felt the danger had been mitigated.

“We are glad to see this outcome, and it was expected,” said Patrick Ptak, a spokesman for Gov. Doug Ducey, in a statement. “We have followed closely the recommendations of the Department of Health Services and Arizona law as we make decisions in the best interest of public health.”

AARP Arizona Director Dana Marie Kennedy issued a statement expressing disappointment in the judge's decision. "Today’s ruling keeps Arizonans in the dark about the true state of our nursing homes and the health of their residents and staff," Kennedy said.

The News Organizations believe strongly in the public’s right to know the information that ADHS is concealing from view. We seek aggregate numbers of infections and deaths due to COVID-19 at nursing homes in Arizona, not a single resident’s name. We see no possible overriding interest in the nursing home business that requires confidentiality of this information, especially during this pandemic. We’ll confer with our clients and consider appropriate next steps.