An Arizona gem: Inside the Four Peaks amethyst mine 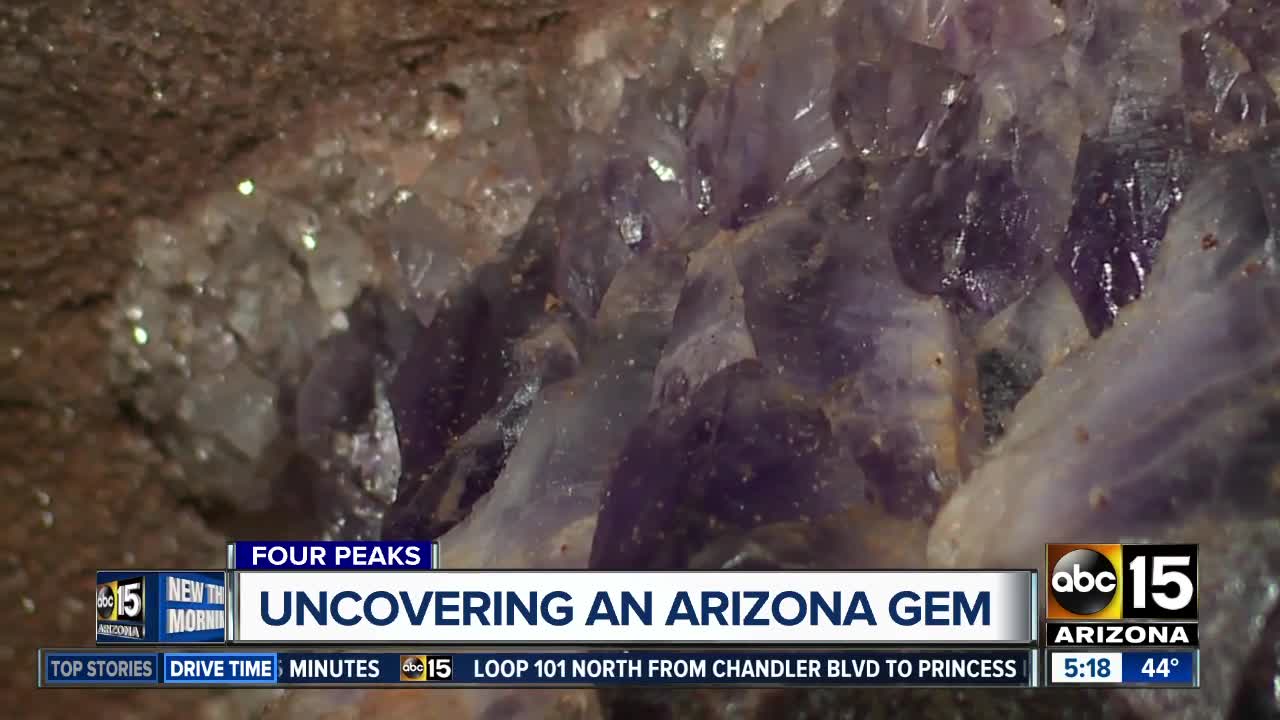 ABC15 was invited to tour the mine with a small group and learn more about its history. Cavano said the site is believed to have been first discovered during the 18th century by Spanish settlers. There is speculation that amethyst from the mine was used in the Spanish crown.

With its distinctive deep purple color, Kurt Cavano knows the stones coming out of his mine are "really, really special." He holds the claim to the Four Peaks Amethyst Mine, nestled in an area around 7,000 feet between the third and fourth peaks.

ABC15 was invited to tour the mine with a small group and learn more about its history. Cavano said the site is believed to have been first discovered during the 18th century by Spanish settlers. There is speculation that amethyst from the mine was used in the Spanish crown.

Amethyst is quartz that contains other elements and is created through a natural process that gives it a purple color.

The type coming out of the Arizona mine is known as "Siberian Red Amethyst" and, as you can probably guess, the only other place it's known to be found is in Siberia.

It takes "millions of years" for the stones to be formed, Cavano said, requiring natural deposits of silica, iron and hot water.

The amethyst leaving Four Peaks has other trace elements including manganese and chromium.

It's small and difficult to reach, only accessible by helicopter or a grueling three- to four-hour hike. Mike Blank and his wife, Ty, are the site's only two miners. They spend roughly half the year, week on and week off, working eight hours per day inside the mine and living in a small, solar-powered home near its entrance.

"My grandparents -- they collected gems and minerals so I was just naturally drawn to them," Blank told ABC15. "It's my life, it's who I am, it's what I do," he said. The couple is so passionate about their work they named their daughter Amethyst. Blank said he plans to work in the mine "until I can't do it no more."

There are no special machines and all mining is done by hand with a hammer and screwdriver to minimize potential damage to the six-sided crystals.

Cavano said approximately one ton of amethyst leaves the mine each year and produces around 50 pounds of gemstones. The stones are tumbled, cleaned, sent overseas to be processed and, in the end, only "a few handfuls" are used in jewelry. Cavano calls it a "labor of love," not necessarily profit.

Where is Arizona amethyst sold?

Four Peaks amethyst can be found at the Four Peaks Mining Co. store, located at the OdySea in the Desert shopping complex in the Scottsdale area, or Sami Fine Jewelry in Fountain Hills. The OdySea store also features a mine exhibit where you can learn more about the process. Tours of the mine are offered periodically on an extremely limited basis.