The best things to save on and buy in October, and what to avoid! 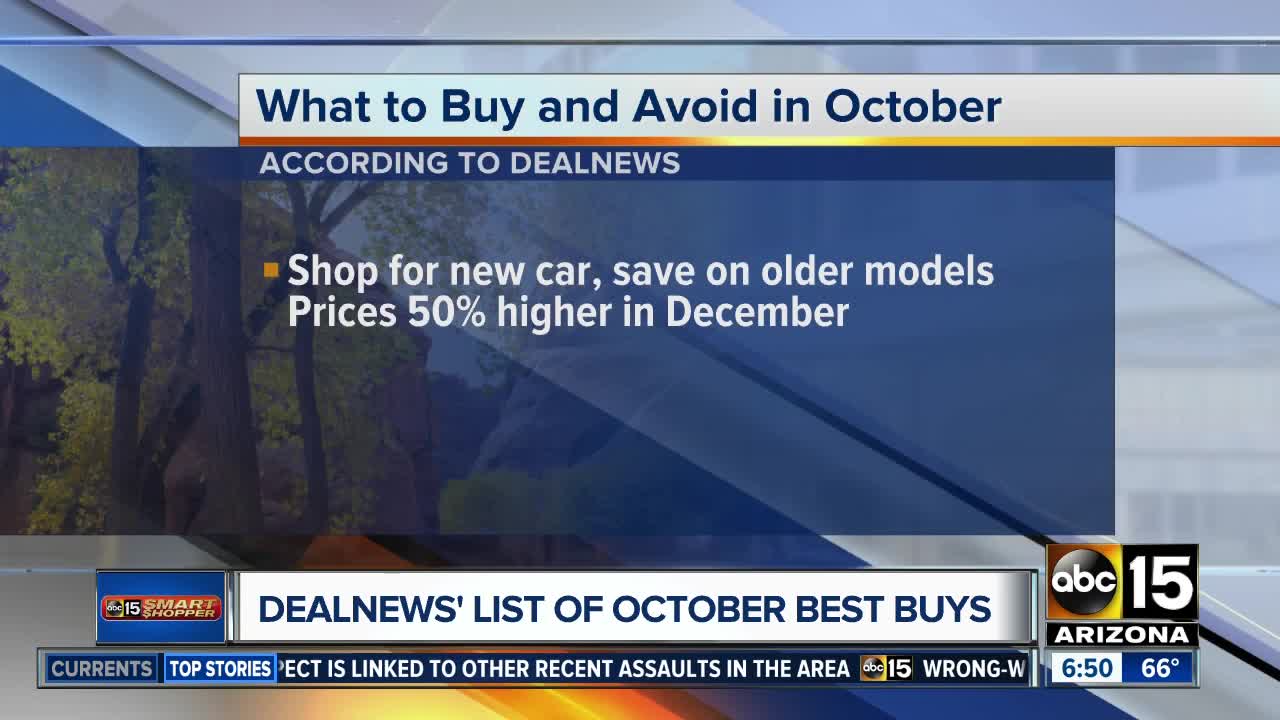 Get some great deals with strategic shopping this month!

It's hard to believe but October is here already, and with the upcoming holidays, you're almost guaranteed to find sales! So, let's break down the best things to buy and what to avoid this month.

DealNews put together a great list to kick off the fall season. They cover seven, but we'll highlight four:

"Indigenous Peoples Day and Columbus Day is the last big shopping event of the year before Black Friday," according to DealNews. So, expect to save on items like shoes. Last year, Adidas, Foot Locker and Puma cut between 25 and 40 percent off already discounted 2018 styles during the Columbus Day sale. Here's a heads up though! Recently introduced tariffs could potentially affect overall prices.

We've covered many great places to find "kicks", and you can score some of them up at Outlets at Anthem too.

There are other items to be on the lookout for during these sales. You could save on furnishing your home and changing out your seasonal items, The big box stores are expected to have sitewide coupons. Look for things like accent furniture, bedding, garden items and more.

The new 2020 inventory is on its way, so it's time to make space on the lots. Out with the "old" and in with the new! So, go check out anything older than the new inventory, including 2019 models. DealNews includes a warning in their article though, stating that tariffs could potentially raise prices around 50 percent higher by December 15 of this year.

Shopping for Halloween costumes can be full of tricks and treats. The absolute best deals on Halloween costumes will be after the celebrating is over on November 1. In previous years, temporary and seasonal costume shops tended to have massive discounts just before they moved out of the building.

But, don't stress boys and ghouls! You can still save before the holiday. Check out Goodwill and other discount stores. DealNews recommends checking out Hot Topic, that normally offers as much as 75 percent off costumes in the first half of October. HalloweenCostumes is another site to research and explore, though we think your best bet is to go DIY style! Click here for the ideas we gave you last year! Plus, we are working on teaming up with a costume shop for a Deal of the Day.

October has a bunch of fun holidays. October 4 is National Taco Day, and the entire month is considered National Pizza Month. So, expect restaurants to dish up all kinds of ways to save that dough... literally!

DealNews says it's also the time to book European vacations, enjoy in-season produce and end-of-season sales for plants like perennials.

Appliances, TVs, laptops, winter clothing, and electronics, including the new iPhone, will be better during Black Friday. Gift cards will be best in December, gearing up for Christmas and the holidays. During that time, you can buy discounted gift cards. Also, some restaurants offer a BOGO deal where you buy a gift card, and get another. That's up to you if you want to keep the second one for yourself or gift it to someone else. Either way, you can still be on our "Nice List".

Click here to see the full article of what to buy and what to avoid in October.