Deal of the Day: Score 50% off two haunted attractions at Sanctum of Horror 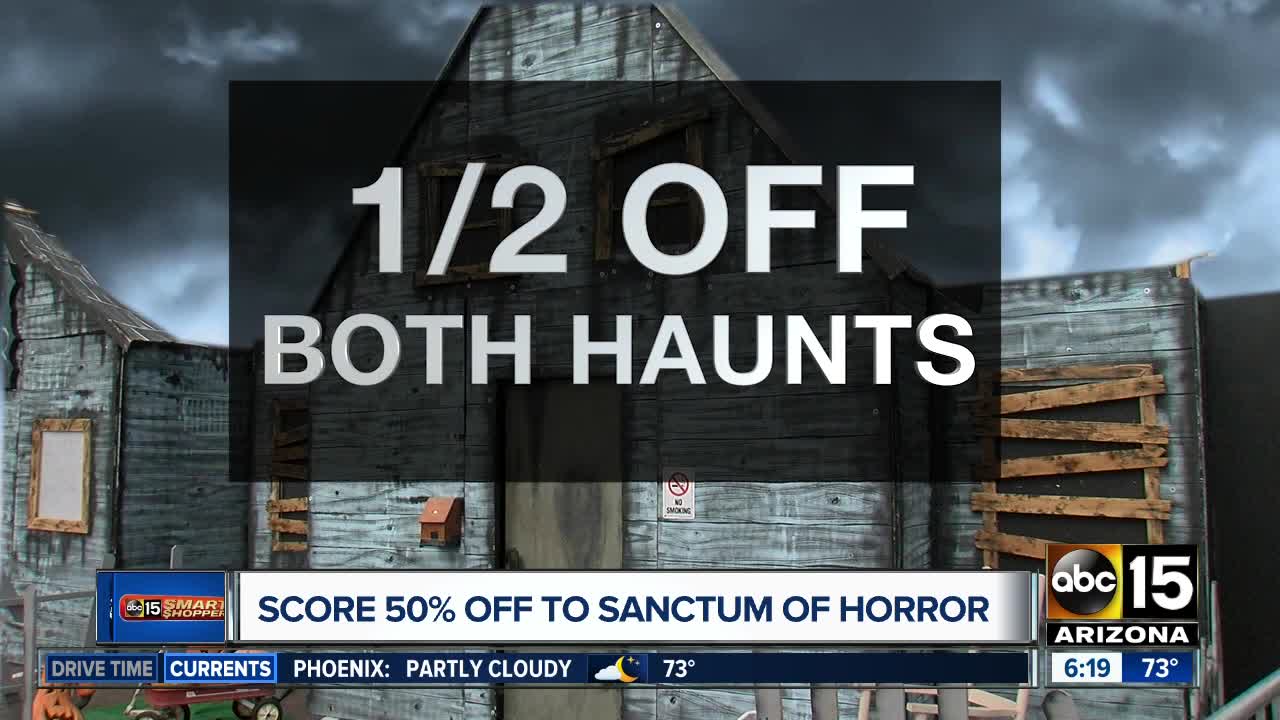 Don't miss this SPOOKY Deal of the Day!

All week long, we're bringing you Halloween-themed deals! On Thursday, we're taking you to Superstition Springs Center, where, instead of shopping, you'll find an exclusive Deal of the Day and a couple haunted house attractions!

We're back again at Sanctum of Horror in Mesa! They describe it as a, "place of fear, a breeding ground of evil. Those who enter this abyss succumb to madness, and now the sanctum has found its way into the mind of a little girl." In previous years, we entered the haunted attraction to find Lenore, going through her home, a graveyard and her asylum! Cue the horror film, high-pitched scream sound effect...now!

There's also an attraction called The Breach. We were told that it's the 1953 military research zone, known as Bunker 16. A distress signal was sent from the grounds one night in October years ago, and what happened after that was a covered up and left as a mystery. Will the rare leech, originally replicating living organisms to heal wounds, come in contact with you, making you its next host?

You have two options get our exclusive discount. You can either go online and enter the promo code, "ABC15", or mention Smart Shopper at the gate. You have until 10 p.m. Sunday night to get the discount.

If you buy tickets online, click here. Then, select the "SoH ABC Smart Shopper Sun" link, or just click here. Select your quantity. When you click, "Check Out", a new window will open, and on the left center of the page, you'll see an area in grey font. It says, "Have a discount code? Click here." That's where you'll enter our promo code: "ABC15". Hit "Apply", and you'll see the price change to half off! Keep in mind though, when you book online, you'll be charged an additional fee of $1.55, bringing your total to $12.55.

So, if you want to avoid the extra fee, buy your tickets at the gate on Sunday, October 20, to get the flat rates. It also appears that you can only buy your general ticket online, and would need to buy the fast pass version in person. So, decide which one you want before you make any purchases.

IMPORTANT: Our Deal of the Day, half-off admission discount, is ONLY valid on Sunday, October 20, from 7 to 10 p.m. So, either buy your tickets in advance online, or get them at the gate that day only.

Both haunts are outside in the Sears parking lot at Superstition Springs Center.

NOT VALID WITH OUR DEAL: Sanctum of Horror also has a blackout event on November 1 and 2, where they turn out all the lights. So, you will have to find a single light inside for your group to use to continue your way through the scares!