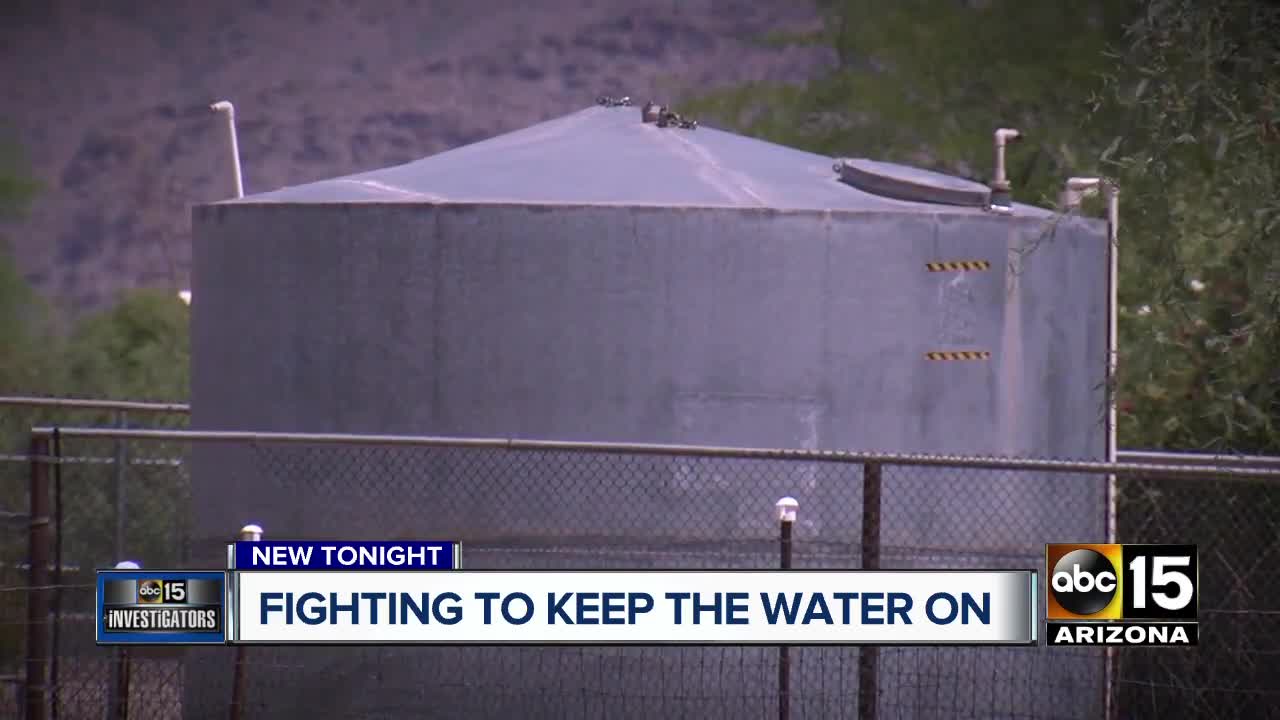 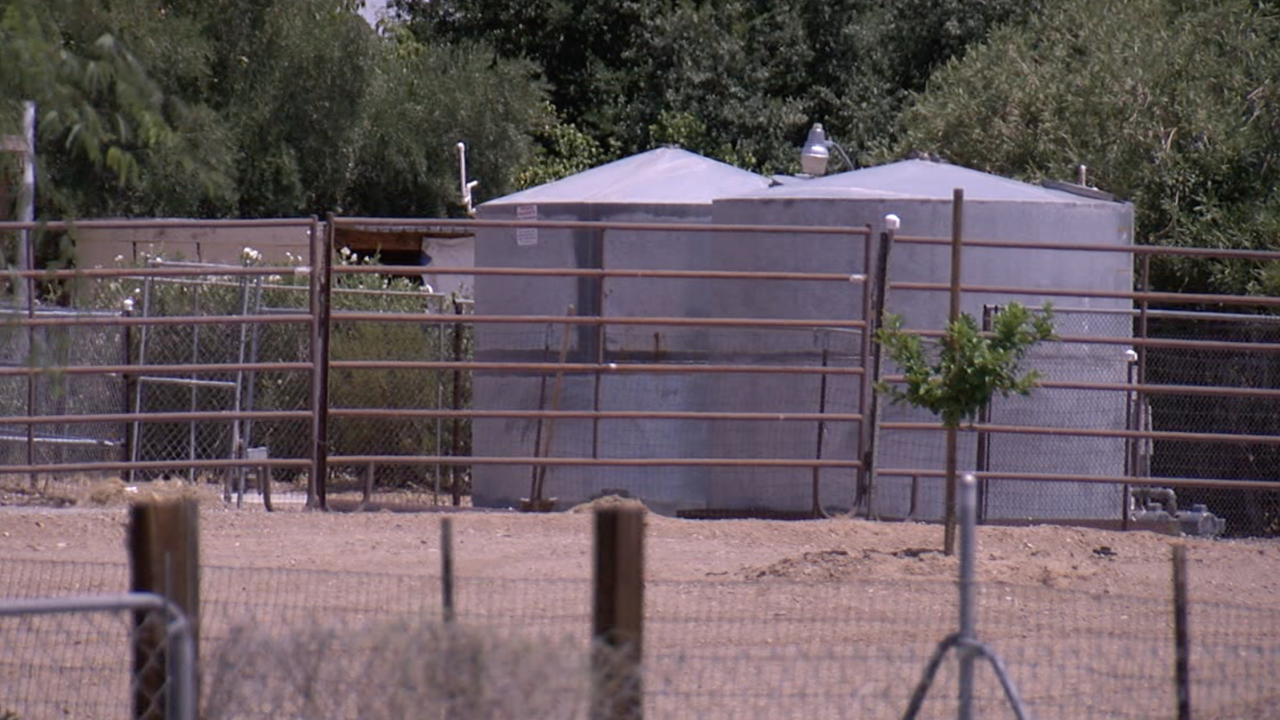 SURPRISE, AZ — An Arizona community says its day-to-day access to water is in danger because of a dispute with one of its neighbors.

Homeowner Katy Parker has a phone full of videos showing low to no water pressure out of her faucets.

"You come home to cook dinner and do the dishes and there's just a trickle of water and [you're] not being able to flush your toilet," she says. "It's dehumanizing."

Todd Young lives around the corner from Parker. The single dad says the water situation is particularly hard on his four girls.

"You don't know when you wake up in the morning if you're gonna have water," he says.

Todd and Katy are part of 16 parcels that are served by Two Tanks Community Well located on a county island near Surprise.

They say the purchase of their property also included a joint well agreement between each of the 16 homes. They would all equally share responsibility with a flat fee to cover operation and maintenance costs, pay for their own respective electricity usage, and have an annual meeting to discuss any issues or updates.

"The lady across the street sent out the bills. Another guy read the meters. It was kind of a word and a handshake type unincorporated association that ran the well, volunteers," she said.

But in January 2015, she says things took an abrupt turn with one of the neighbors.

"We found out they were working on a kind of hostile takeover type thing," Parker says.

She says neighboring property owner Ana Rosa and her husband Jose registered an LLC called Rosa's Water with the Arizona Corporation Commission, then informed the other users that their company was running the well and wanted neighbors to start paying them.

"The Rosas kind of crashed that meeting to introduce Rosa's Water and start explaining to us that they were the owners," Parker says. "And that the surveys were wrong, the county was wrong, you know the assessor maps were wrong. Everything was wrong."

Two Tanks neighbors refused to pay and filed a lawsuit in 2016.

The neighborhood has been in a bitter battle ever since.

Arizona Department of Water Resources well registration documents show the well has gone back and forth between Two Tanks Community Well Association and Rosa's Water several times since 2015. Eventually, the agency flagged the well as being in dispute and will not make additional changes until a court decides ownership.

Much of the dispute has to do with the location of the well site.

Two Tanks well components -- including the public easements, pump, storage tanks and electrical meter -- are located at the intersection of four neighboring parcels.

One of those parcels belongs to the Rosas.

Ana and Jose Rosa would not agree to be interviewed for our story, but according to county documents, in 2015, one of the original developers of the land deeded them the small parcel within their property that contained the well's electrical meter. A second small parcel was also included in that deal, but neighbors question whether the recorded deed is legitimate. They point to the changing of legal descriptions found in the four different deeds that the Rosas recorded on the property between January 2015 and June 2016.

The first two deeds recorded in January 2015 have the same legal description of a small parcel on property one house down from the well site.

The last two deeds recorded in June 2015 and again in June 2016 have a completely different legal description and place the parcel at the well site.

Regardless of the validity of the documents, Katy says the entire area "was granted as a well site easement back in early 2000s" and is subject to the original well agreement unless there is a change by majority vote.

The lawsuit resulted in a 2018 court-approved settlement that would have appointed a neutral third party to operate, maintain and collect payments for the well.

Then a fence with their company signage went up blocking access to the well. And the neighbors say Rosa's Water started turning it off.

Todd says he's had to jump the fence to get it back on, "then coordinate with the neighbors to fill up their bath tubs so that they can fill up their toilets to flush them."

Arizona law does not govern how private wells operate and any disputes have to be settled in civil court.

The county and state can only get involved when there is an issue with the safety of the drinking water.

That issue came up in 2019 after the Maricopa County Environmental Services Department says the Rosas made "unauthorized" modifications to the well.

During a January visit, inspectors with MCESD and ADEQ were denied access to the well site by the Rosas, according to a county report.

Agency representatives notated an "unauthorized" gate, locks, and construction at the well site. The report says Jose Rosa admitted they had "cut the pipe" and planned to disconnect "additional water users."

The county instructed that the Rosas were to provide emergency water and access to the site, but even that didn't get the water back on consistently.

In June, the Arizona Department of Environmental Quality secured funds to fix the well, then filed its own lawsuit against the Rosas. The suit argues the couple created an "actual or potential endangerment to public health" and asked a judge to require the Rosas correct violations and stop interference with the "operation and regulation of Two Tanks system."

While that case works its way through the courts, Todd and Katy say the outages continue.

But their hope is that something good will come of it all.

"Vehicles aren't in place to deal with something this bizarre maybe there will be after this," Katy said.