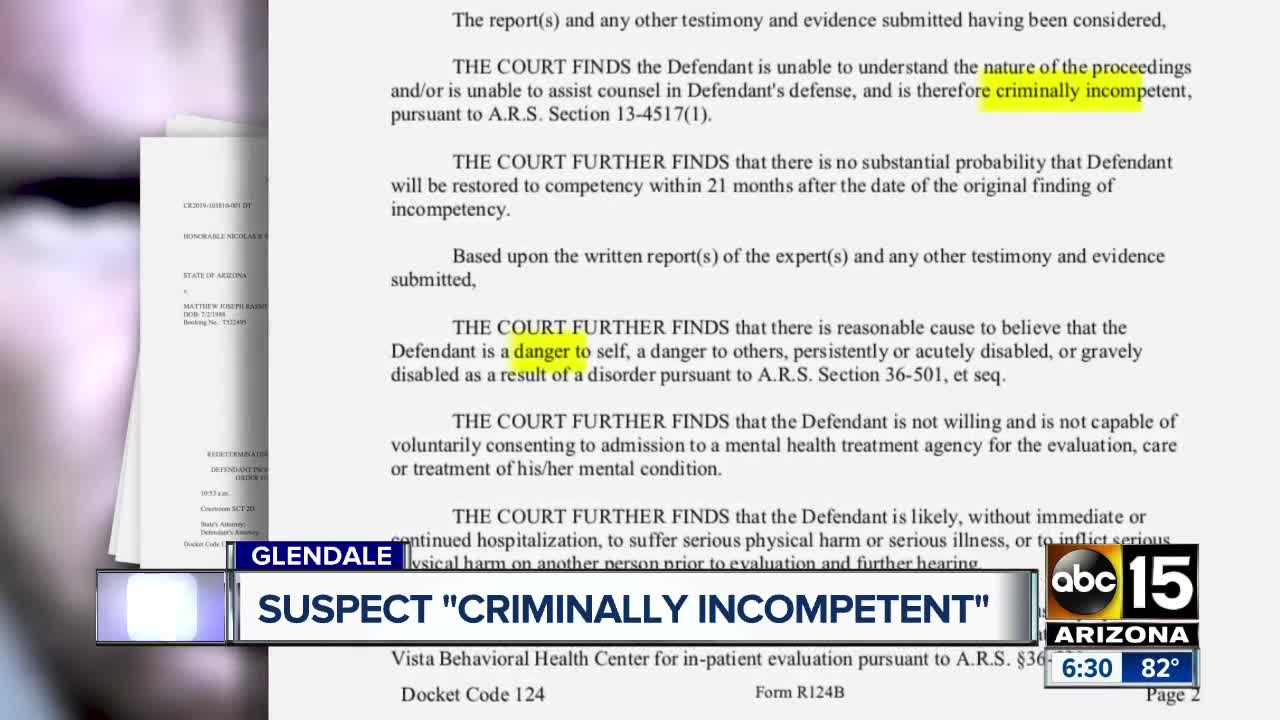 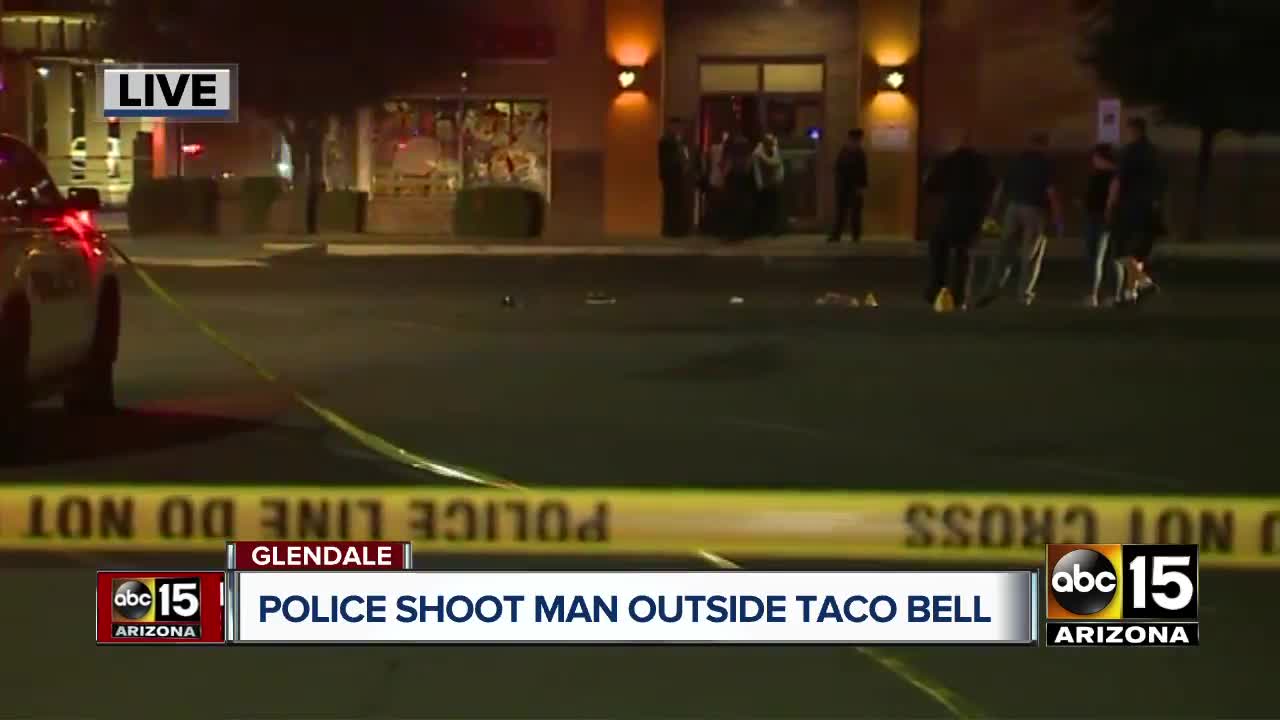 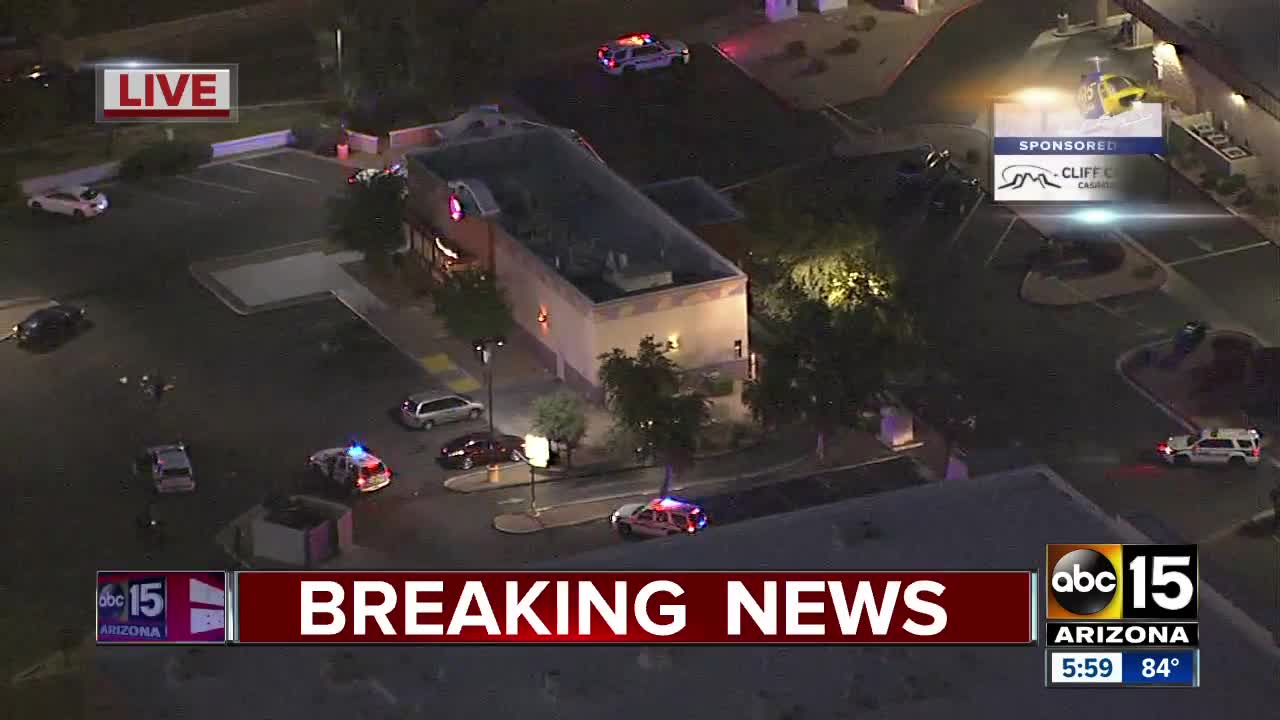 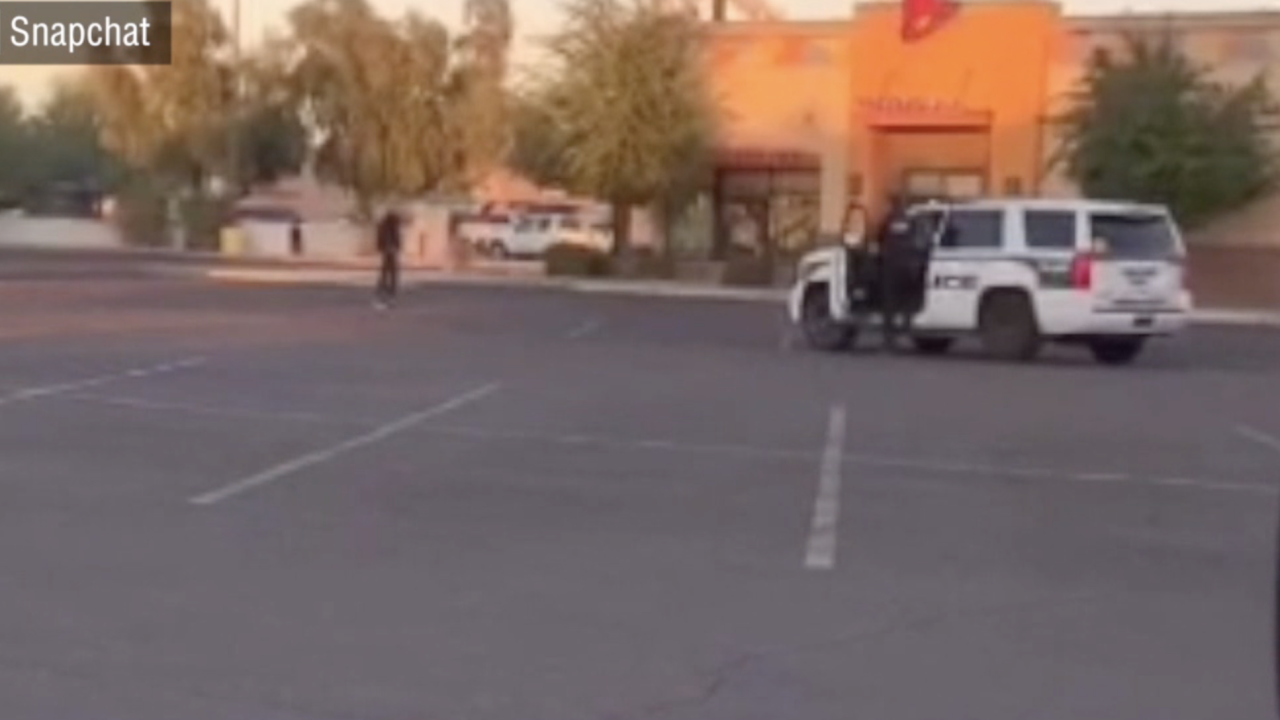 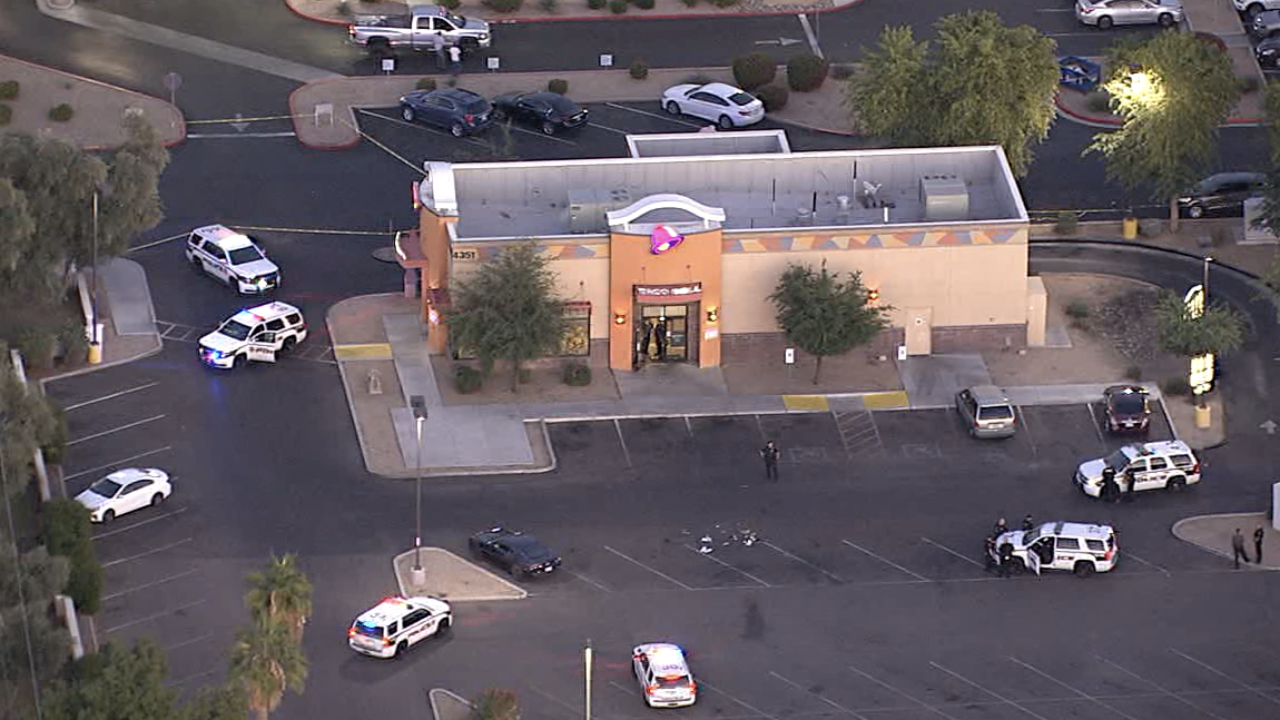 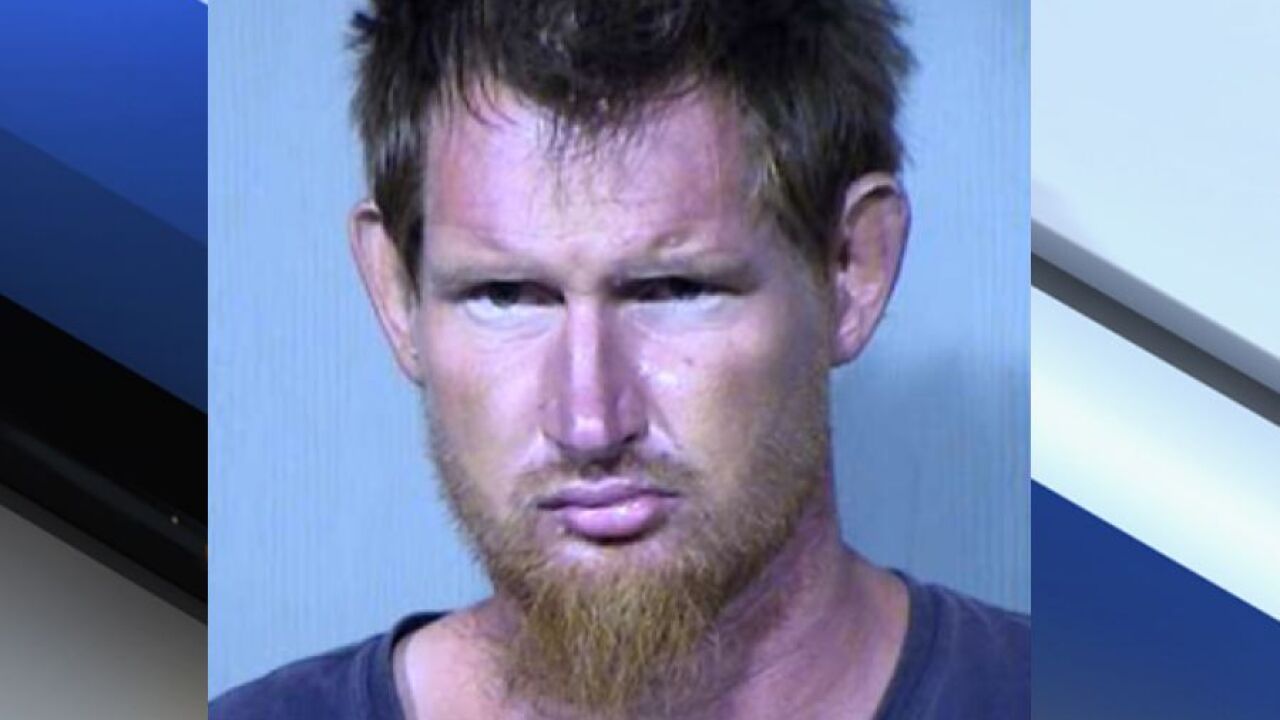 GLENDALE, AZ — A 31-year-old man is dead after being shot by Glendale Police officers Monday evening.

The incident happened around 5:25 p.m. outside a Taco Bell restaurant near 43rd and Olive avenues.

The man, Matthew Rasmussen, was apparently holding “at least twelve-inch-long metal forceps” according to police.

Witnesses though, say Rasmussen was clearly having some sort of mental episode and did not pose a clear threat to officers.

“He kind of had a coat over his head and he was kind of just dancing around or hallucinating,” said Nick Stein, who was waiting in his car for an appointment when he watched the entire incident unfold.

“He would not respond to officers. He was still acting erratic,” said Glendale Police Sgt. John Roth. “He wasn’t really acting malicious, he was just ignoring them,” said Stein.

Glendale police say less-lethal options and mental health crisis teams were not available at the time, and due to Rasmussen's proximity to Taco Bell customers, they decided “to go hands-on.”

"They sent another officer around to flank the guy, and he came up behind him. [The officer] didn’t have a helmet or any sort of extra gear, which was interesting to me. Then they tackled him from behind," said Stein.

A scuffle ensued. "The guy, of course, threw some punches back,” said Stein.

“That’s when unfortunately he started swinging at the officers with an object,” said Sgt. Roth. “Obviously they were in fear for their lives and they discharged their firearm.”

“Four gunshots at him,” said Stein, who told ABC15 it took ten minutes for an ambulance to arrive.

Police say once the tackling officer realized Rasmussen had forceps and was fighting back, he “disengaged” and got out of the way. Rasmussen was shot “multiple times” while on the ground.

“They have discretion as to what they use. Tasers are a useful tool... but it may not be an effective tool or resource at that time. So the officers made a decision,” said Sgt Roth.

Only one officer fired shots, but Glendale police could not say how many times he fired or how many times Rasmussen was shot. None of the officers were injured.

Court documents dated from July, 2019 show criminal charges in one case against Rasmussen were dropped because he wasn't competent and couldn't understand the court proceedings. He was sent to a mental health facility in Mesa and was said at the time to be a danger to himself and others. At some point, Rasmussen was released from the facility.

For Stein, who says he loves police, what is clear is that the shooting could have been avoided. “I don’t think that’s the way it should’ve been handled.

Detectives are now picking up medical supplies and shoes. One looks like it could be from an officer and the other likely from the man shot.
Glendale PD says there was a scuffle & the man was trying to “stab” the officer with the ‘tweezers.’ pic.twitter.com/mGomEKGhG2

#BREAKING Glendale Police have shot someone outside the Taco Bell at 43rd Ave & Olive/Dunlap.
The person’s condition is unknown but no officers were injured. Working to learn what led up to the shooting.
You can see the paramedic equipment left behind in parking lot. pic.twitter.com/T5C5CKFzvj

This officer-involved shooting comes a day after an early Sunday morning shooting involving Phoenix police. In that incident, Phoenix police say a suspect and four others, including a police officer, were shot near 28th Street and Roeser Road.

Police say one officer, two female victims and the suspect were shot in the overnight incident. A second officer was bitten by a police K9 on scene. The suspect, 32-year-old Michael Austin, died Sunday from his injuries.