Experts say body cam video of Glendale officer is "sadistic and may be criminal."

GLENDALE, AZ — ABC15 went to three independent experts with decades of experience in law enforcement and use of force cases looking for an outside perspective on the body camera video of Glendale officer Matthew Schneider tasing a suspect nearly one dozen times.

Williams is a former Los Angeles Police Department detective supervisor. Noble is an attorney and former deputy chief of police in Irvine, California who has testified in hundreds of cases, including Tamir Rice and Philando Castile, who were both killed by police officers. Stoughton is a former police officer and current attorney and professor at the University of South Carolina School of Law.

ABC15 traveled to southern California to interview Williams and Noble in person. Stoughton was interviewed over the phone.

Here is a second-by-second breakdown of the footage, with comments from the experts: 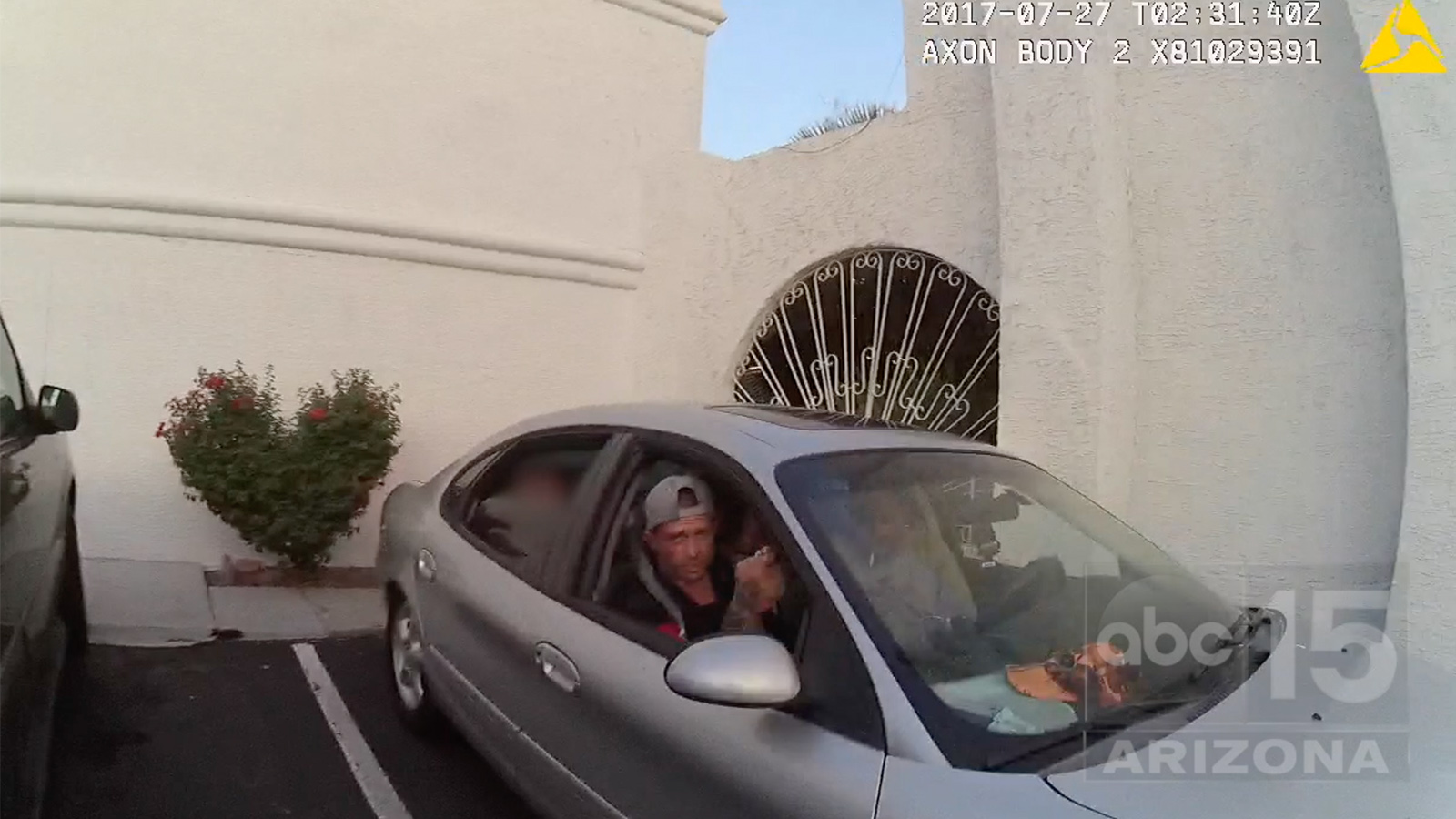 Officers Matt Schneider and Mark Lindsey approach the car for an alleged turn signal violation. Schneider, who claimed to see the violation, walks over to the passenger side where Johnny Wheatcroft is sitting. Officer Lindsey walks to the driver’s side. A friend of Wheatcroft's, Shawn Blackburn, is the driver. In the backseat, Wheatcroft’s wife, Anya Chapman, and two children are sitting.

WILLIAMS: I have concerns about the initial justification for the stop.

NOBLE: The controlling officer is not going to the driver’s side and investigating the turn signal. He’s focused on the passenger, which tells me that maybe this is not why we’re here. They’re not really interested in his turn signal violation. 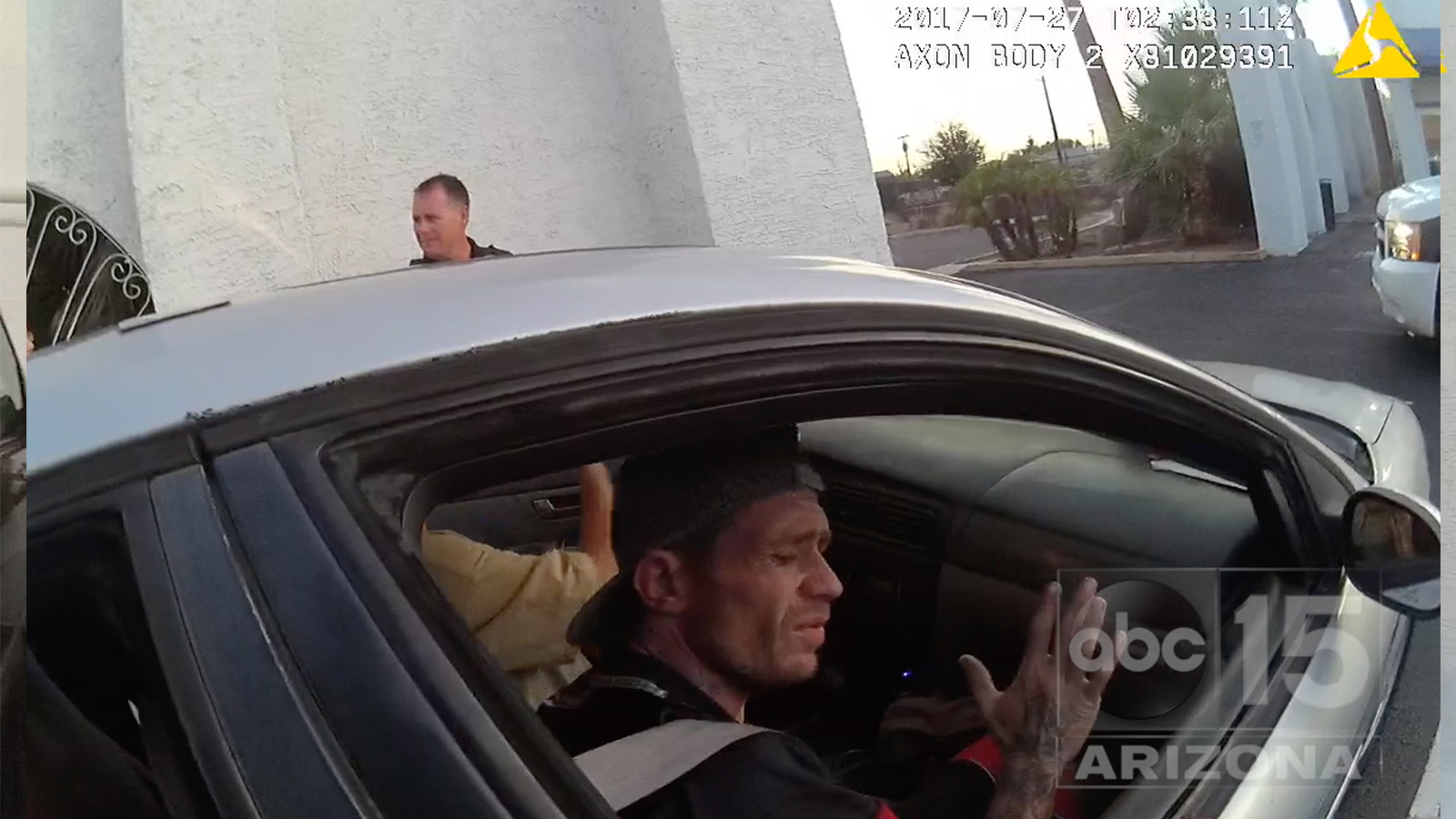 Schneider asks Wheatcroft multiple times for identification. He responds by asking why that’s necessary since he wasn’t driving the car. The officer tells him, “If you’re a passenger in a vehicle, you need to have ID.” And if Wheatcroft doesn’t provide it, Schneider says, “I can take you down to the station and we can fingerprint you.”

NOBLE: So the passenger, he’s asking very reasonable questions: ‘Why are you asking for ID?’ And the officer tells him, ‘If you’re a passenger in the vehicle, you have to give ID.’ That’s misstatement of the law. He doesn’t have to give ID...It’s not true. It’s not accurate. (Then the officer says) ‘I can take you down to the station and fingerprint you.’ Well no, you can’t. You can’t. That’s using his authority in an improper way by claiming he can arrest or detain him to fingerprint him when he’s done nothing wrong. 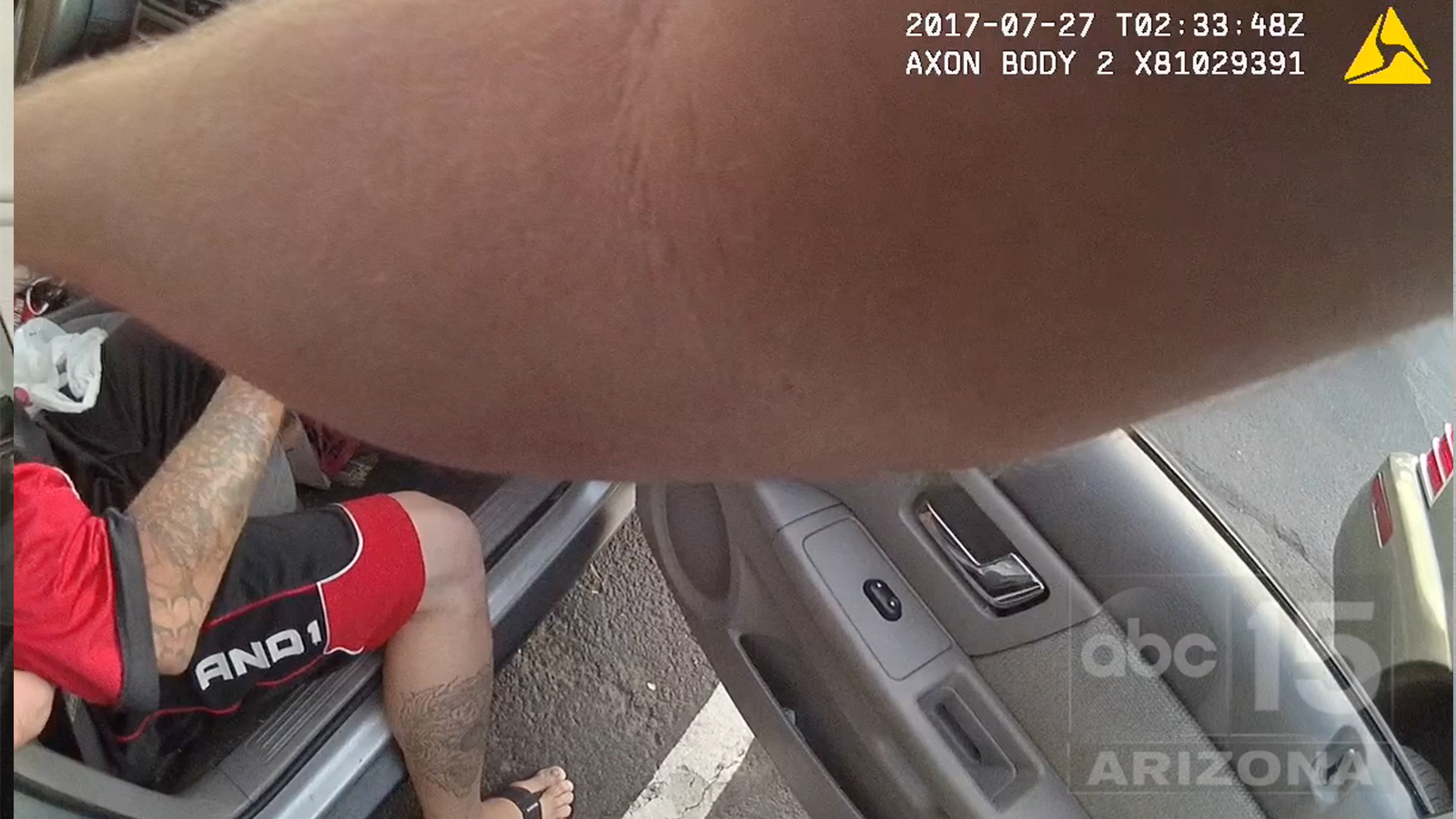 NOBLE: Look at the passenger, there’s nothing threatening there. He hasn’t made any threats, All he’s done is ask some questions…We’re at a point, where this gentlemen, to a reasonable officer, has not done anything wrong. What has he done to allow an officer to physically touch him at this point? So to use force, you have to have a lawful detention or lawful arrest, why are we here. We are here for a turn signal violation and he’s not the driver. 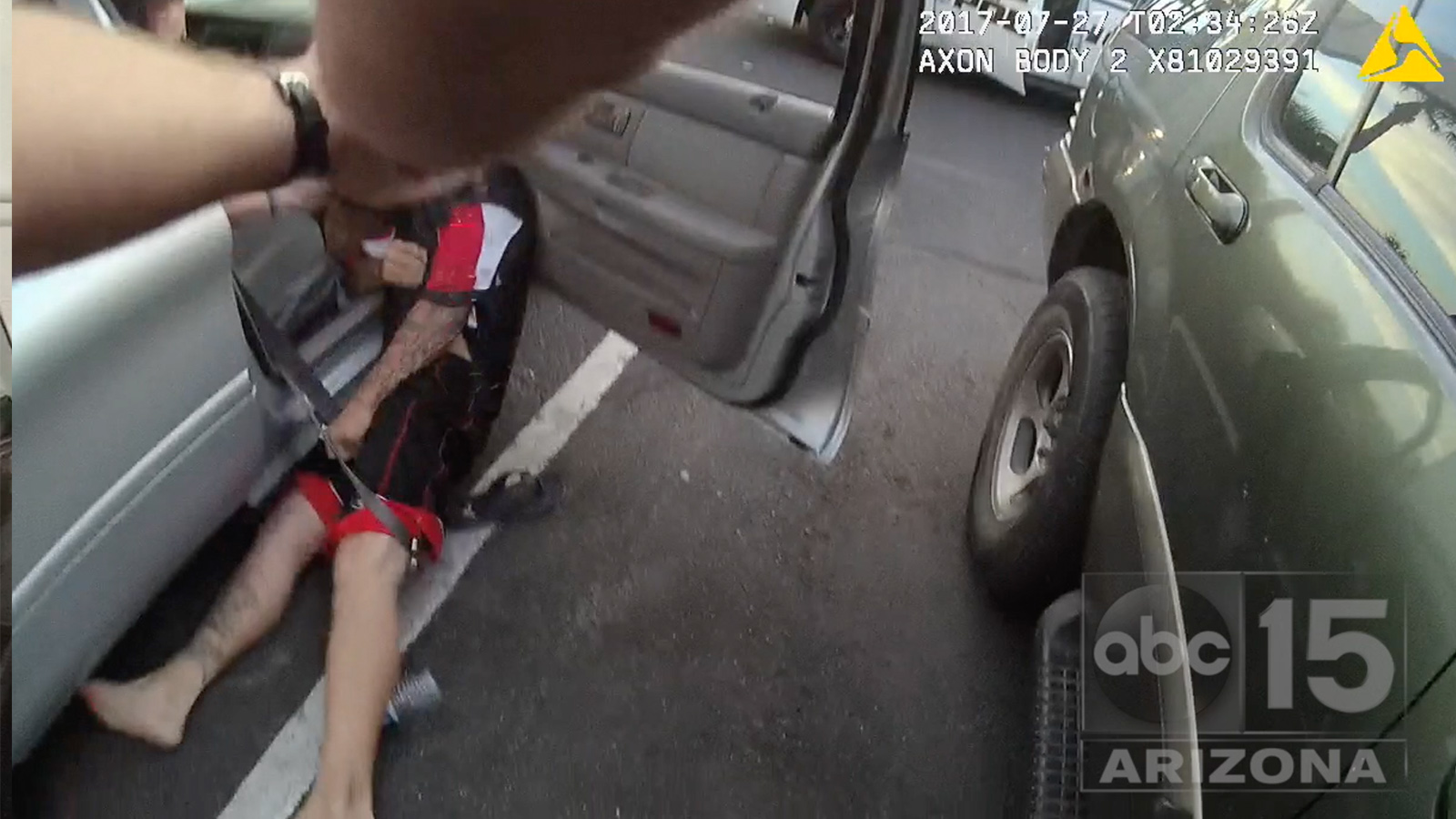 Schneider then puts his Taser away and uses his other hand to grab Wheatcroft's elbow and put him into a plain compliance hold. The seatbelt wraps around Wheatcroft’s head and legs as officers try to pull him from the vehicle.

NOBLE: He’s put him in a rear wrist lock with the seatbelt over his shoulder. If I did that to you right now, you would similarly bend forward. And if you were not flexible, it would be painful. It should be no surprise to this officer, that he is pulling some resistance back. Because he is putting him in a position of pain. This is a pain compliance move. He’s twisting his wrist, he’s putting his left hand on his elbow forcing forward where the seatbelt is restraining him. 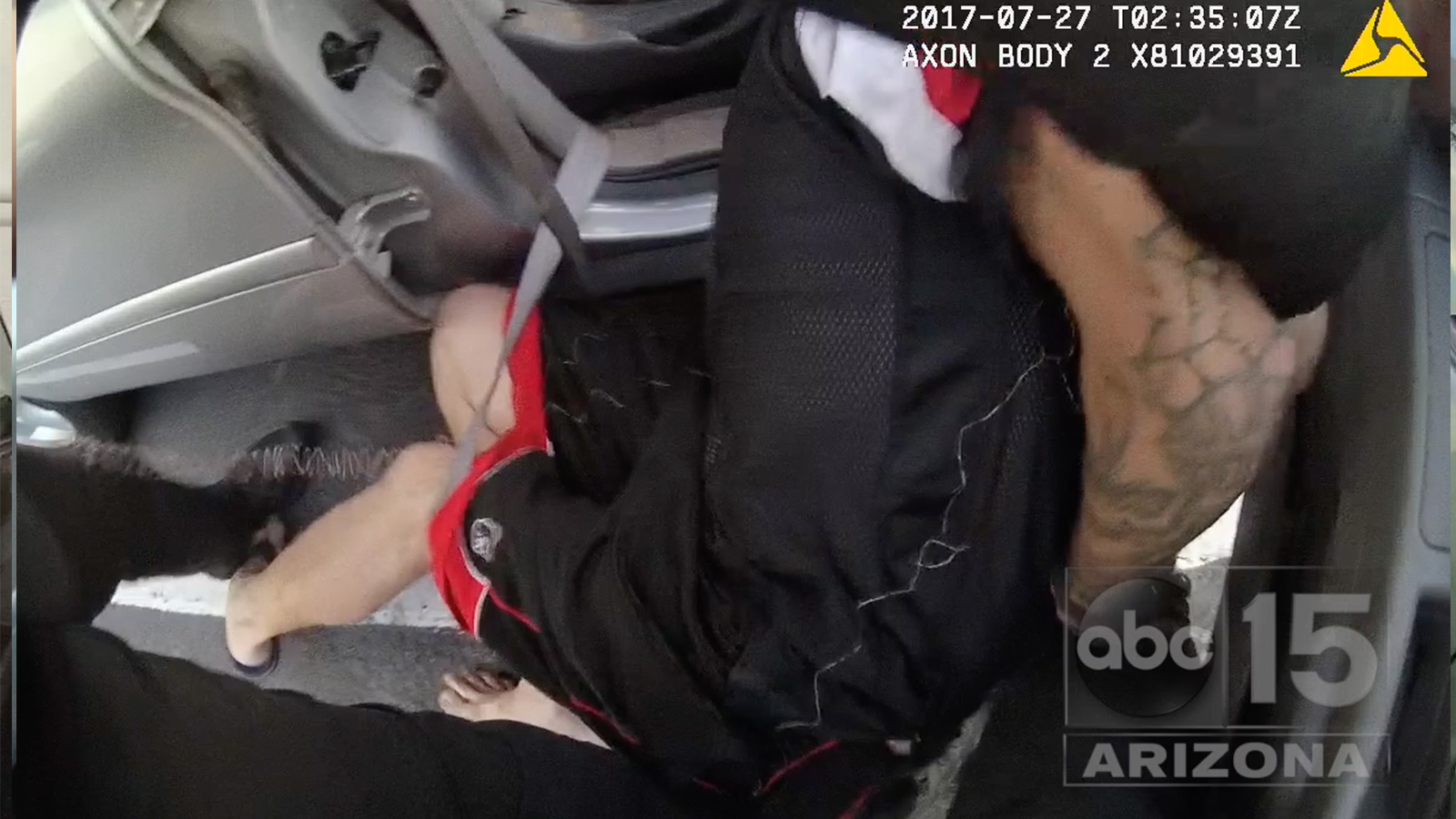 With Wheatcroft tangled in the seatbelt, another officer tases him multiple times in the left side by using what’s called a “drive stun.” Officer Schneider then steps back and fires his taser at Wheatcroft who’s on the ground between the car door and the vehicle, with the seatbelt wrapped around his legs. The officers then drive stun Wheatcroft several more times. He’s placed in handcuffs.

WILLIAMS: He’s being drive stunned there and he’s still strapped into the seatbelt. All of that physical initiation by the officers should not have been. He can’t comply because you’re not allowing him to comply…What you see here is textbook wrong -- at every angle.

NOBLE: He was just sitting there, and they’re tasing him again. (Reporter: So there’s no reason for that? It’s about pain, just to make him hurt?) Absolutely. That’s exactly what that is for. It’s about pain. This is about causing this man pain. There is no legitimate law enforcement purpose for that Taser. 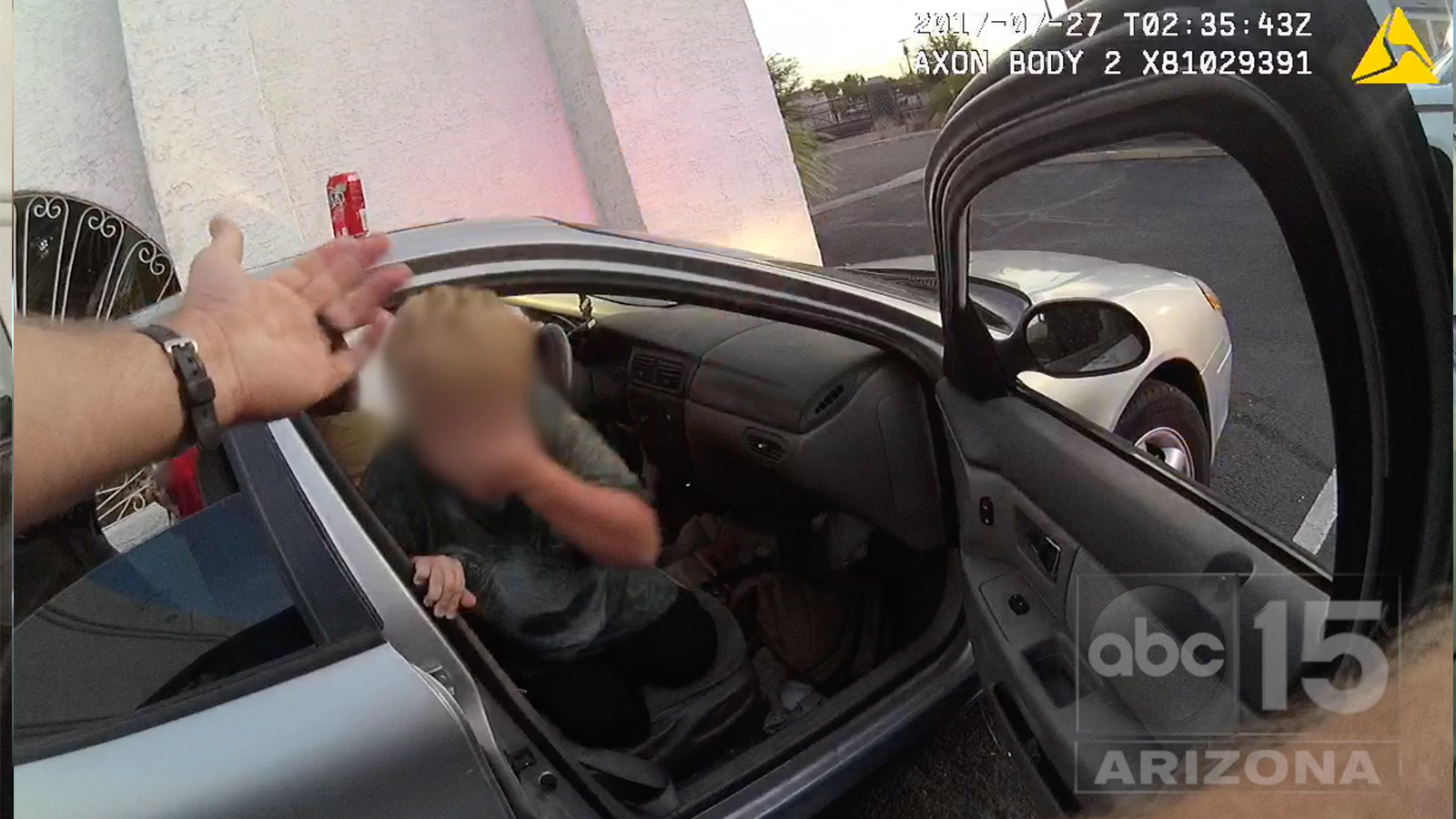 During the previous portion, officers claim Anya Chapman hit Officer Lindsey in the head with a plastic bag of items. You hear Schneider say, “Mark is hurt.” The officers then try to drag Wheatcroft away from the vehicle, but his legs are still stuck in the seatbelt. The 11-year-old boy in the car moves into the front seat to finally free Wheatcroft from the belt. Schneider commands the boy to go to the front of vehicle, causing him to burst out in tears and scream.

NOBLE: He’s trying to let officers know, 'I’m trying to comply. I’m stuck I can’t do what you want me to do.' A child, a small child, who just released his legs, who in effect helped the officers, (Schneider) starts giving orders as if he’s a suspect. And you see the boy, who just did something good, just tried to help the officer, being confronted.

WILLIAMS: The young kid there had more common sense than the officers...The officers should have done that themselves. 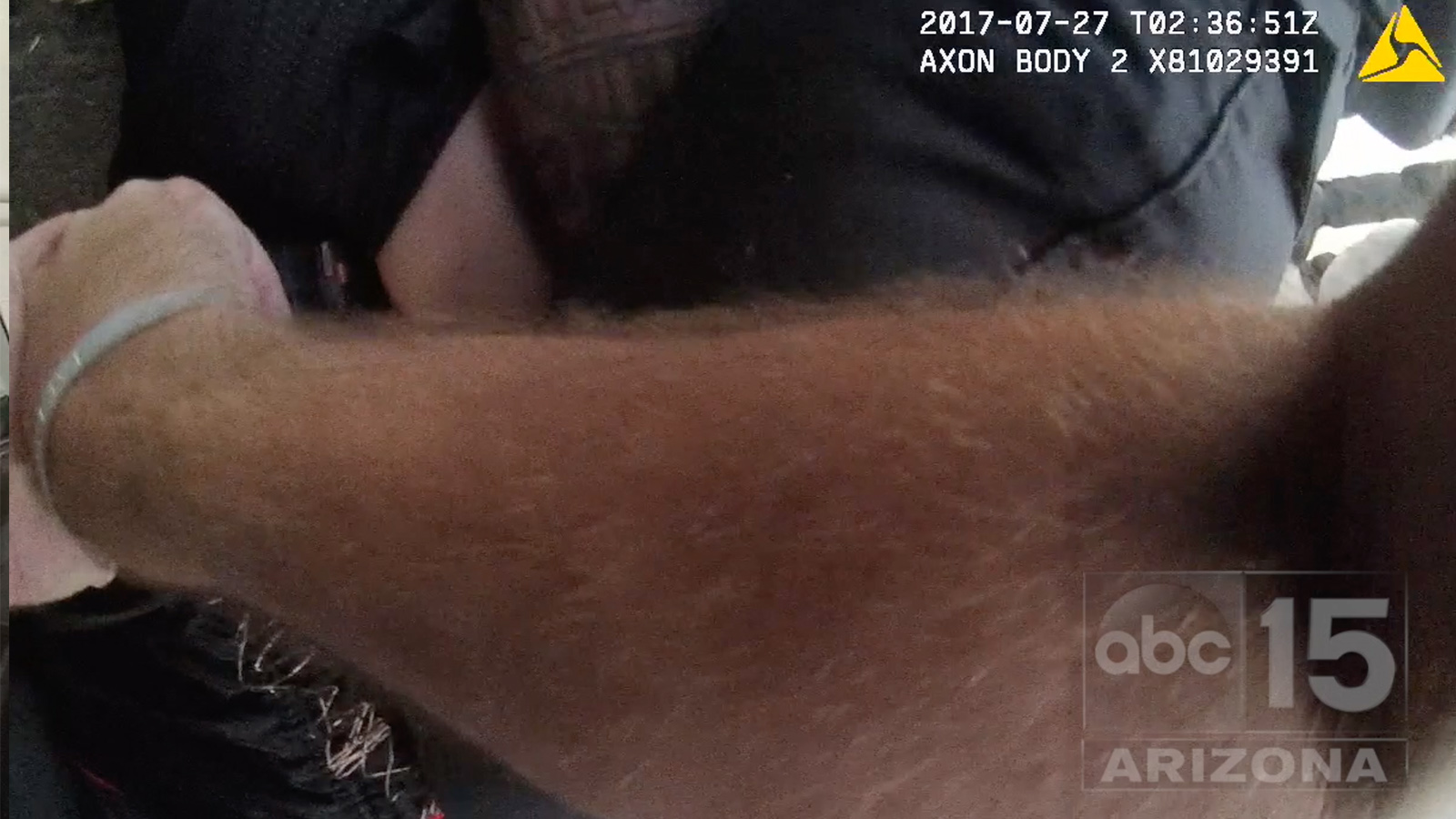 Wheatcroft is laying face down on the asphalt, handcuffed, with an officer kneeling on his back. Officer Schneider then turns, accuses Wheatcroft of kicking, and then kicks Wheatcroft in the groin twice. Schneider then takes his left hand, pulls down Wheatcroft’s athletic shorts below his buttocks, and tases him in the testicles, according to Wheatcroft’s lawsuit. Shortly later, Schneider recharges his Taser and this time places it on Wheatcroft’s penis while he’s laying on his side, saying “You want it again? Shut your mouth. I’m done (expletive) around with you.”

WILLIAMS: That’s not even borderline. That’s inhumane...There’s no reason to tase him period when he’s handcuffed at all. They’ve got four, five officers around there. All of that tasing should have been done; well there shouldn’t have been tasing to begin with.

NOBLE: This is not an accident...This has the appearance of an intentional act. There’s absolutely no legitimate law enforcement purpose. This is beyond the pale. This is unconscionable. 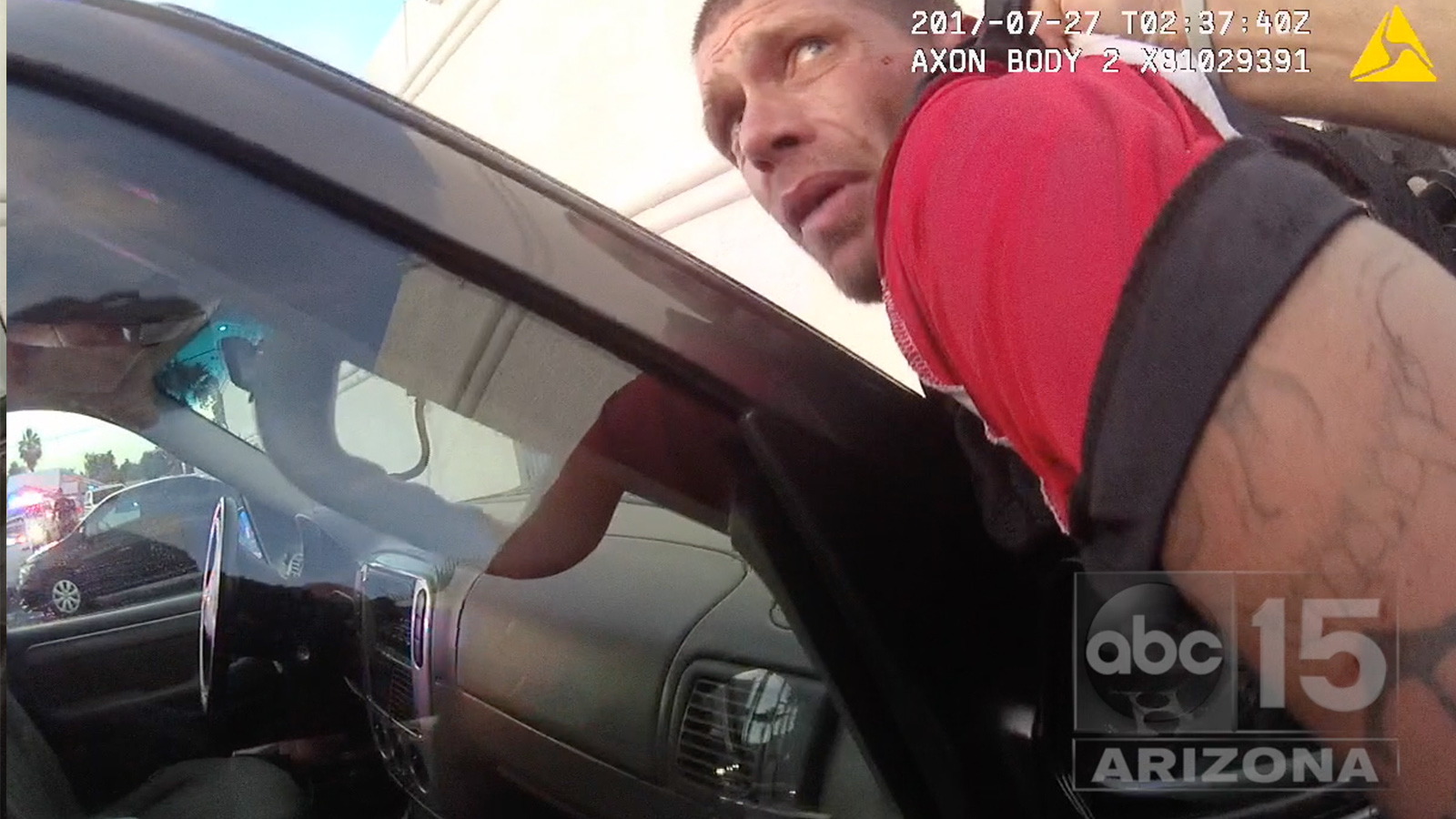 A handful of officers pull Wheatcroft to his feet and pull Taser probes from his skin. He yells in pain, Schneider tells him, “Shut up…You shouldn’t have been stupid then… Quit acting like a big baby.” Wheatcroft was tased 11 times, according to his attorneys. He was placed in a police vehicle and booked into jail for two counts of aggravated assault. He did not receive medical treatment. Experts said he should have.

NOBLE: This was bad from the beginning, and it only got worse.

WILLIAMS: They started wrong and they ended wrong. There is no justification for what they did.

See continuing coverage of this story