Could 15 minutes have been the difference between life or death for Antonio Arce? 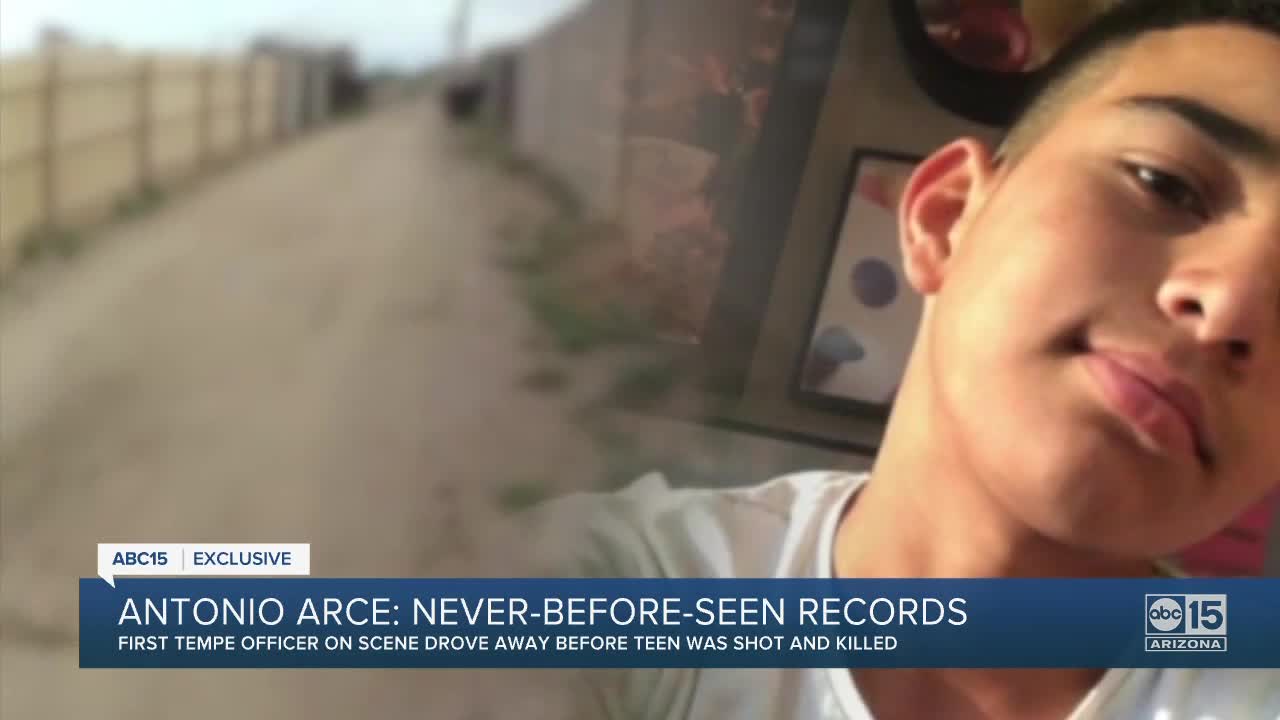 First Tempe officer on scene and drove away before the teen was shot and killed.

TEMPE, AZ — There were protests in his name, and tears shed for more than a year.

The death of Antonio Arce sparked unrest in Tempe in January of 2019, after the 14-year-old was shot in the back by now former Tempe Police Officer Joseph Jaen.

Jaen, resigned from the department months later, but was never charged with a crime.

The teen’s family filed a five-million-dollar lawsuit against the City of Tempe and its police department. They settled for two-million in June of this year.

Months after the case was seemingly resolved, and Arce's family moved to California to start fresh, ABC15 obtained documents from the Tempe Police Department, showing a separate internal investigation related to police activity on the day Arce was killed.

The investigation centered around 11-year patrol officer Alex Pina, and his whereabouts on that fateful January day.

"I was in the area where the shooting happened," he told Professional Standards Bureau Investigators. "That day, or the day prior an email came out saying, hey, we want patrol to do extra patrol in this area especially that alley because of what the complainant saw about suspicious people being in the alley."

Pina says he parked outside the alley off 48th Street and Vineyard that afternoon, and saw a grey truck pull in with the bed of the truck filled with what he described as garbage.

Pina says he chose not to drive into the alley behind the truck or make contact with the truck owner.

"I get there, I was like 'I'm not gonna go in the alley behind this guy. He might get stuck in there. He's gonna stop. I'm not gonna be able to get out,' cause, you know, you can't back up in the al-I mean, you can't do U-turns in the alley....I'll just come back in a minute and he'll probably be gone and then I can see if there's anybody sleeping there, lounging around there and stuff like that--transients."

The 47-minute interview was conducted on March 20th, more than two months after Arce's death. Pina later told investigators he was re-directed to assist Phoenix police in a separate call.

"It was a warrant service pick up, something like that," he added.

Pina tells investigators he never got out of his patrol vehicle while near the alley, and didn't investigate the truck any further after seeing it.

"Initially when I saw the truck, like I'd mentioned, he had a bunch of junk. He's looking for junk, trash and he's gonna leave the area. I didn't, I didn't know- I didn't think he was gonna stick around or cause any kind of, you know, anything alleged crime or anything like that." Pina said.

He didn't, we later learned, but a 14-year-old was accused of trying to do so after spotting the truck himself.

Pina heard the call to investigate the truck after a neighbor called police, and later he heard the officer-involved shooting code go out over their channel.

"Did you notify dispatch by radio or KDT to let them know about having seen the vehicle earlier, and what it might be up to?" asked Sgt. R. Johnson with Tempe Police.

"And can you explain why not?" Johnson asked.

Pina says he returned to the alley after the shooting, and later decided to write a supplemental report explaining his presence at the alley earlier that afternoon.

Internal Investigators later asked Pina about the details of the truck, whether the amount of junk was secured, and if Pina was familiar with several City of Tempe codes that state both driving with an unsafe load and driving through an alley/thoroughfare are citable offenses in Tempe.

"Is there a reason you didn't run the license plate?" asked Lt. Scott Smith. "No, I just, I could've run it. I - I don't know why. I just didn't- I just didn't run it- like I just perceived it as, you know, (unintelligible) he's gonna look in the alley for some stuff and I was like, okay, he-he's gonna leave in a minute."

The next month, Tempe police sustained three allegations against Pina, finding that the patrol officer "failed to comply with police duties" in this instance. They found he violated the following policies:

"An examination of Ofc. Pina’s actions and, more importantly, his inactions during this incident, proved necessary," read the departments findings.

This was also not the first time the department investigated Pina for not taking appropriate action. In 2017, Pina conducted 'similar' conduct . "A pattern of conduct is apparent with this incident under investigation; conduct which is not in line with the Tempe Police Department core values and standards of professionalism."

The department issued Pina to serve a 20-hour suspension.