$50,000 worth of bees stolen from the Valley Honey Company 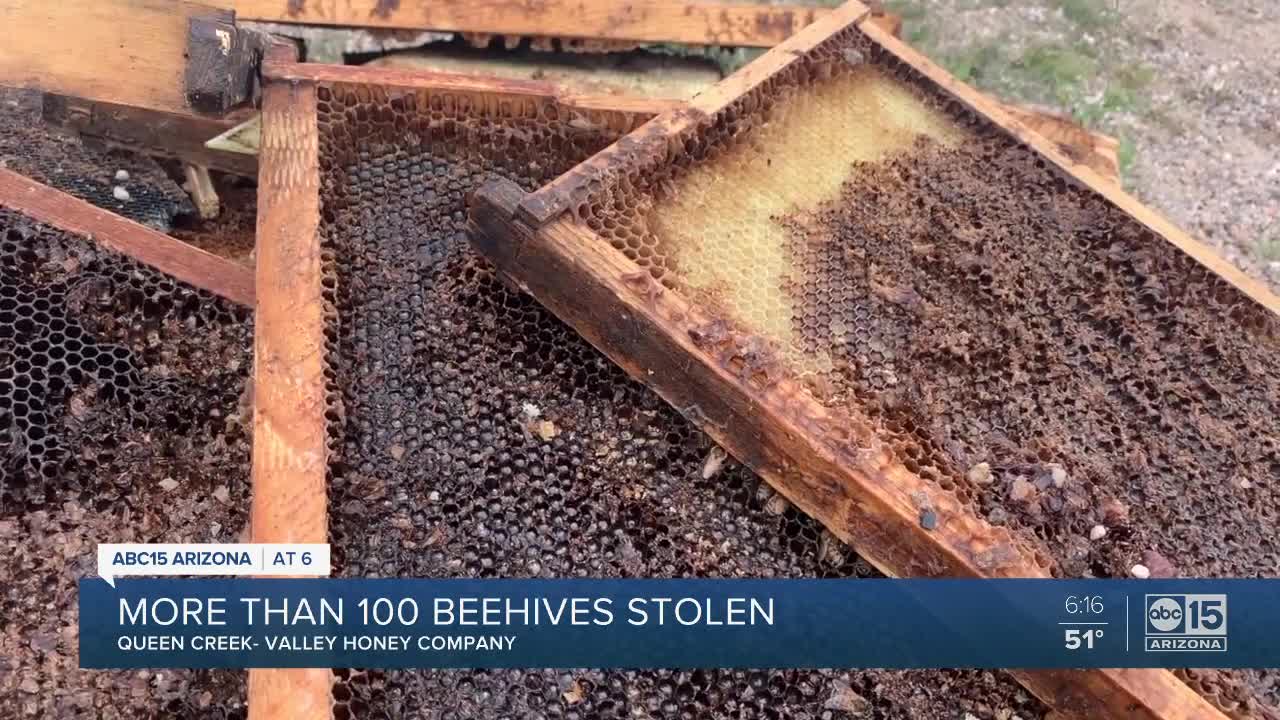 More than 100 beehives were stolen from a Queen Creek business, by people allegedly trying to resell them for profit.

QUEEN CREEK, AZ — “This pallet here was empty, there are pallets that should be here but they’re not,” said George Brenner IV walking us around his remaining beehives.

Spending half the year making honey, the other transporting bees to California to pollinate almond fields for farmers.

A task that's in major demand due to the global shortage of honey bees.

“It is well over half of your income for the year,” said Brenner III regarding their business of transporting the bees across state lines.

Farmers pay big bucks for their bees. But over the weekend, thieves loaded up and stole 112 hives valued at more than $50,000 dollars.

The thought of losing 50 percent of their income stung, to say the least.

“Initially I was so angry because where we were back in there we thought we were safe,” said Brenner III.

"What I am going to do, how am I going to pay my bills, not only were the bees stolen but the income from them was gone too."

He says they keep the bees on leased land, far from public access.

They soon posted what happened on Facebook and the tips rolled in from the bee community.

“There must have been thousands of eyes looking,” said Brenner III after receiving hundreds of tips and videos.

One finally paid off. The stolen hives tracked down to a property near Wickenburg.

A stakeout commenced until law enforcement could arrive.

“They were taking these brands and they were chiseling them off,” said Brenner IV who watched the thieves preparing to ship off his bees.

Each box is branded much like cattle. Identifying who the boxes belong to. It allows ports of entry to make sure what’s being transported across state lines isn't stolen.

They say the thieves planned to take the hives to California to cash in on the almond crops before selling them entirely.

Brenner says they retrieved the property with Maricopa County Sheriff deputies by their side and the crooks were given a citation but not arrested.

He says he can't understand why someone who stole such a high valued item wouldn't immediately be shipped to jail.

As if the crime itself wasn’t already brazen enough, the crooks showed up at Brenner’s property while we were conducting our interview, begging Brenner not to press charges.

Only making the lack of arrest more upsetting.

“They give them a ticket, they have to show up somewhere later down the line, there’s something really wrong with the system,” said Brenner IV.

He says he's not the only bee farmer to report stolen hives and says this is a growing problem as demand for bee pollination continues to rise.

Brenner IV says they plan on getting an order of protection to hopefully keep the thieves off their property for good. They also plan to press additional charges.

PCSO says they are sending a request to the Pinal County Attorney's Office recommending charges including theft and possession of stolen property.