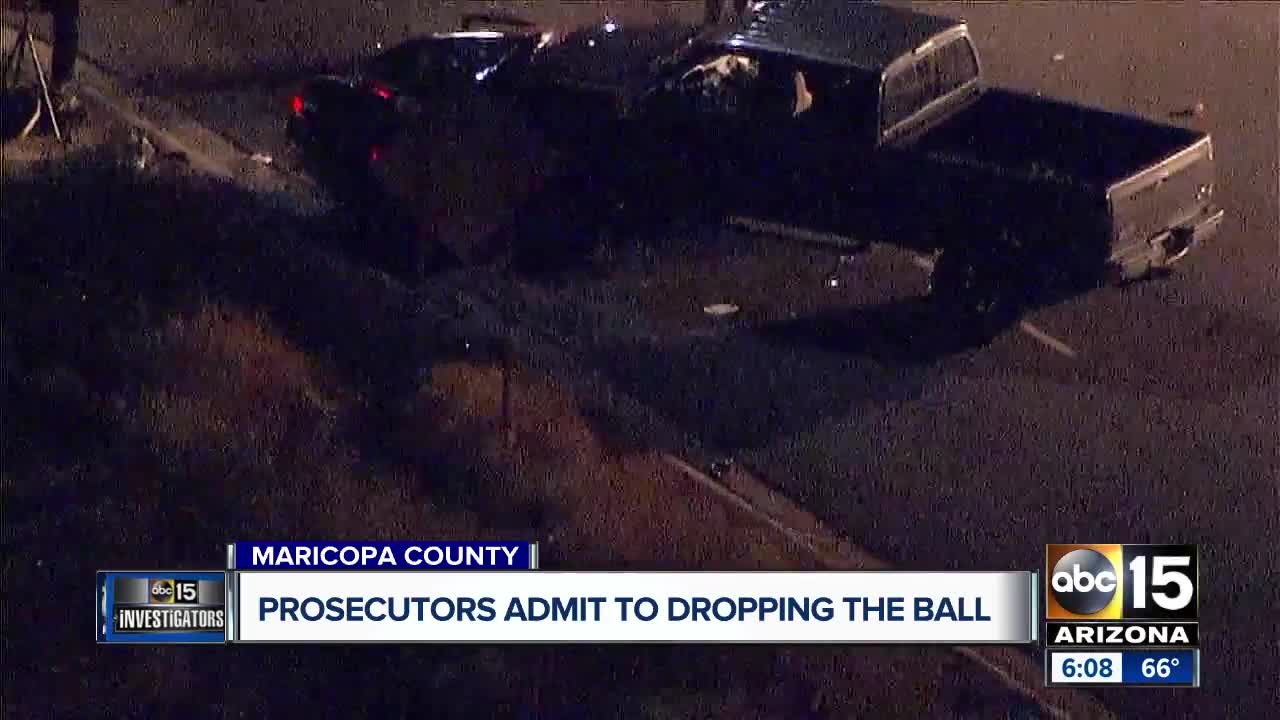 Maricopa County Attorney admits making a mistake letting case go on too long allowing the statute of limitations to expire.

SALT RIVER, AZ — The Maricopa County attorney's office is speaking out after a controversial decision that has resulted in no charges being filed against a Valley man who allegedly drove drunk, and killed a young couple and their dog in a deadly crash.

The incident happened in October 2018 near McKellips and Alma School Road. Police said Collin Reeves ran a red light and collided into the couple who was making a left turn.

Prosecutors say differing witness accounts, and the loss of two witnesses led to the decision not to file felony manslaughter charges in this case.

"This is a terrible tragedy, what happened to these two young people. This is any parent's worst nightmare. I am a parent, I can't even imagine, we do understand their sorrow and we wish we could do something more, but we are limited under what the law allows us to do," said Jennifer Liewer, Communications Director at the Maricopa County Attorney's office.

She added that prosecutors have strict guidelines on what they can and cannot charge. "The national standard for prosecution is a reasonable likelihood of conviction at trial. That means when we take a case to trial, we have to believe that we will be able to convince 12 people beyond a reasonable doubt that this person should be convicted of this crime," said Liewer.

Family members of the two victims don't understand the decision, calling it outrageous and saying it makes absolutely no sense. "I'm disgusted. I'm humiliated, I'm embarrassed to even be a part of this county," said Shannon Dillard, the mother of Audrianne who was killed in the crash.

"They just told this family it's okay, go get drunk. Go get exceedingly drunk, speed through an intersection, kill two kids and a dog and we're going to let you go without a fine. That is not okay," said Scott Palumbo, an attorney representing the grieving families.

Liewer said the decision not to charge Reeves weighs heavily on many at the prosecutor's office, but they are bound by ethical standards. "Vehicular homicides are very difficult. They are messy, often witnesses don't remember. In this situation two witnesses are no longer alive."

She added that there were a lot of questions about when each vehicle had actually entered the intersection, and who was supposed to yield to whom. "Arizona state statute is very clear in our state. When you are turning left, you are to yield to oncoming traffic," said Liewer.

ABC15 asked the prosecutors office if that meant a man who allegedly drove drunk and killed two people would walk away with no legal consequences.

"That is a true statement and it is a tragedy. However, as prosecutors we need to be responsible in how we charge things. While we wish we could do more, our hands are tied on what the law and ethical standards require us to do."

While the prosecutor in this case was investigating the case, the statute of limitations passed, which means a misdemeanor DUI charge could not be filed. "Unfortunately there was gross oversight by our prosecutor. That charge did not get filed," said Liewer.

ABC15 asked if the DUI charge could have been filed before they started their investigation in this case? "Yes, that was an option, and it plain and simple, was an oversight by the prosecutor not to file it," said Liewer.

The County Attorney's office has now launched an internal review of this case to find out where they dropped the ball to ensure this doesn't happen again.

"I will say this, we have a new county attorney and throughout that process, we're reviewing all of our policies and procedures and taking a look at how this office can do better," said Liewer.

She added that the office was already working with their case management staff to put processes in place to ensure the statute of limitation deadlines were not overlooked or missed in the future.

A spokesperson for the Torres and Dillard families said they were not giving up hope and were appealing to Salt River Police and the Attorney General's office to see if they could give the case another look.