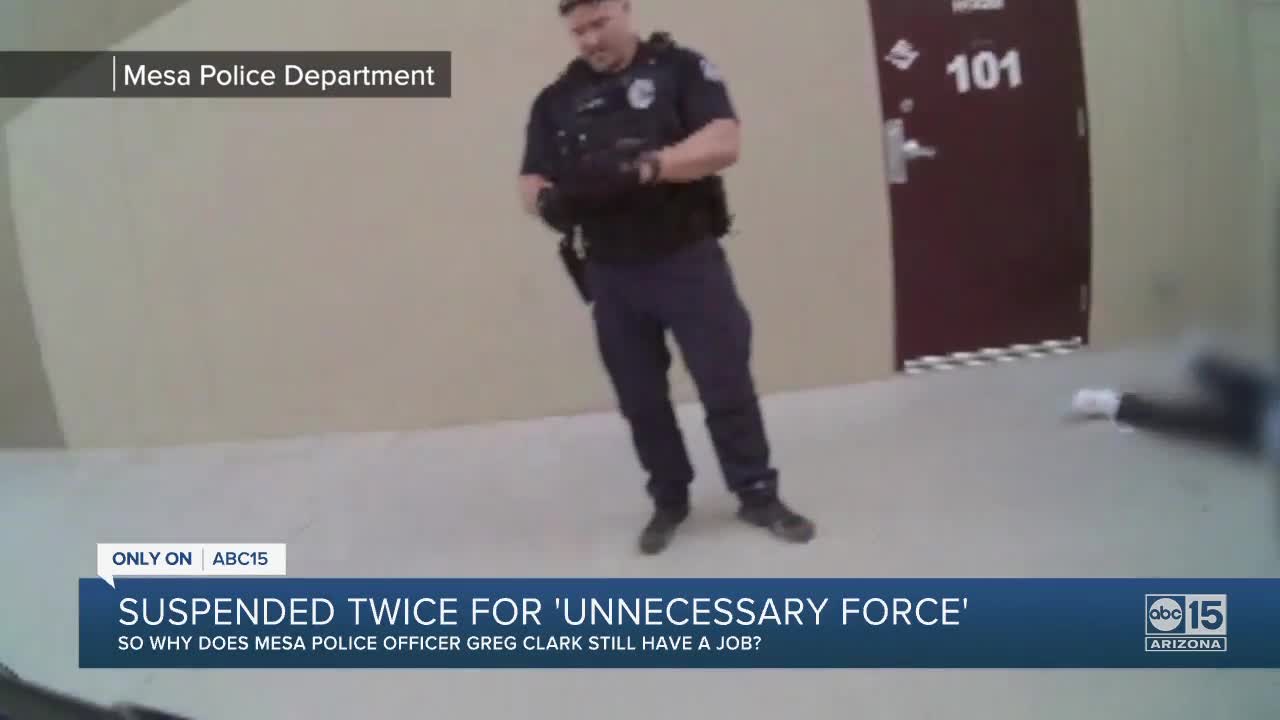 So why does Mesa police officer Greg Clark still have a job?

In the aftermath of George Floyd's death, police departments across America have come under new scrutiny.

For decades police departments have been able to quietly discipline officers, sometimes for the same repetitive problem.

In Mesa, one officer has been suspended without pay for 130 hours for two separate incidents, both in the past two years and both involving "unnecessary or improper force."

Officer Greg Clark has been caught twice, on body camera, kicking handcuffed suspects. In one case, he further breaks a teen's cell phone, and in the other, he pulls the restrained man up by his hair.

Clark is still an active patrol officer for Mesa PD.

"No, we do not," replied Mesa PD's Assistant Chief Ed Wessing.

They may have a Greg Clark problem though.

In March 2018, Clark was part of the bike patrol squad when he and another officer encountered a teenager they believed was trespassing.

In body camera footage, the teen can be seen running from the two officers and jumping walls to elude arrest. Eventually, the teen gives up, lays on his stomach and surrenders to the officers.

Clark though, can be seen unnecessarily ramming his knee into the young man's back, cuffing him, then lifting him onto his feet. Seconds later, Clark kicks the young man's leg out from under him, causing the teen to fall without being able to catch himself.

Fortunately for the teen, and Clark, he was not injured. Right after the leg sweep, Clark picks up the suspect's phone then quickly tosses it at a wall, causing the screen to crack more, according to an internal Mesa disciplinary report.

When outlining the policy violations in internal documents, supervisors wrote that Clark demonstrated "reckless, poor decision making in the moment."

But the sergeant also appears to make excuses for Clark and try to explain away his blatant misconduct, writing:

"It was in the heat of the moment and after a foot pursuit. It sounded as if Officer Clark simply did not think about it and acted quickly. There did not seem to be any willful disregard for the suspect's safety or property..."

One of the steps was that Clark's "immediate supervisor will review all use of force body camera footage."

The corrective action plan, though only lasted five months, until June 2019.

Three months later, in September 2019, Clark appeared to disregard all of the "corrective action" when he kicked a handcuffed suspect and pulled him up by his hair.

"He was disciplined for a very similar incident," said Assistant Chief Wessing.

The most recent 'unnecessary use of force' happened after the suspect, also accused of trespassing, gave a female Mesa officer a different name, then took off running when she confronted him about his physical appearance.

After a brief pursuit, the suspect fell, and the officer put him in handcuffs. Seconds later, Clark arrives on scene, and on body camera footage, the female officer can be heard telling Clark, "Help me stand him up."

Clark then kicks the cuffed man near his leg and then lifts him up while gripping a chunk of his hair. Because the review and hearing process is so lengthy, Clark was not actually suspended until late April 2020.

The discipline was "110 hours of unpaid time off, some additional remedial training and placed on disciplinary probation for one year."

When he watched the video again, Wessing was clear in his condemnation of the behavior.

But he told ABC15 that the department and City of Mesa did not view it as a fireable offense.

"If we really felt that this had risen to the level of termination. There's no doubt in my mind that both myself and Chief Cost would've made that determination."

Also unacceptable in Chief Wessing's mind was how another officer, Joel Countryman, talked to Mitchell.

"I'm going to take this off you," says officer Countryman, while appearing to remove the handcuffs from the suspect. "If you move, you're going to hit the ground so ****ing hard. Do you understand?"

"What do you make of that language?" asked Crenshaw.

"It's unacceptable. We do have in our code of conduct a violation of discourtesy. Where our officers should not be using profanity," said Wessing.

But Countryman was never disciplined.

"There's going to be less of a tolerance for mistakes on officers parts and [people] are going to expect more severe and direct discipline," said Kevin Robinson, an ASU professor and former Phoenix Police Assistant Chief.

Robinson says the fact that Mesa PD discovered Clark's policy violations on their own, and disciplined him, should be reassuring to the public.

"Demonstrating to the community that they are going to deal with issues when they come to their attention," he said.

There are some in the community though, who believe Clark should no longer be an officer.

Robinson, who was the chairperson of the Phoenix PD's Disciplinary Review Board for more than 12 years, says Clark's pattern of behavior is cause for concern.

"The whole idea of discipline is to correct the behavior. If you don't respond to that correction initially, then you can be a liability to the organization," he said. "And that's what police departments have to be very careful of."

"Do you feel like you have people in your department who are a liability for Mesa PD?" asked Crenshaw.

"You know," replied Wessing. "None that I am aware of."

Wessing acknowledges that body camera footage of Clark's misconduct will only further hurt the department's reputation and trust within the community.
"It does tend to lower the trust the community has with us," said Wessing. "If you continue to be eroding that public trust by failing to address issues, you're never going to be successful."

Many may wonder why Clark was not charged with assault in either case. Assistant Chief Wessing says the department did not do a criminal investigation in the first incident.

They did look into whether criminal charges were warranted in the second hair-pull incident, but Wessing said the suspect did not want to participate in the potential prosecution.

In addition to being on disciplinary probation for a year, Clark has been moved to a day shift, and has a new supervisor in charge of holding him accountable.

If you have any information about police misconduct, accountability, or unusual success stories, email Zach at zach.crenshaw@abc15.com