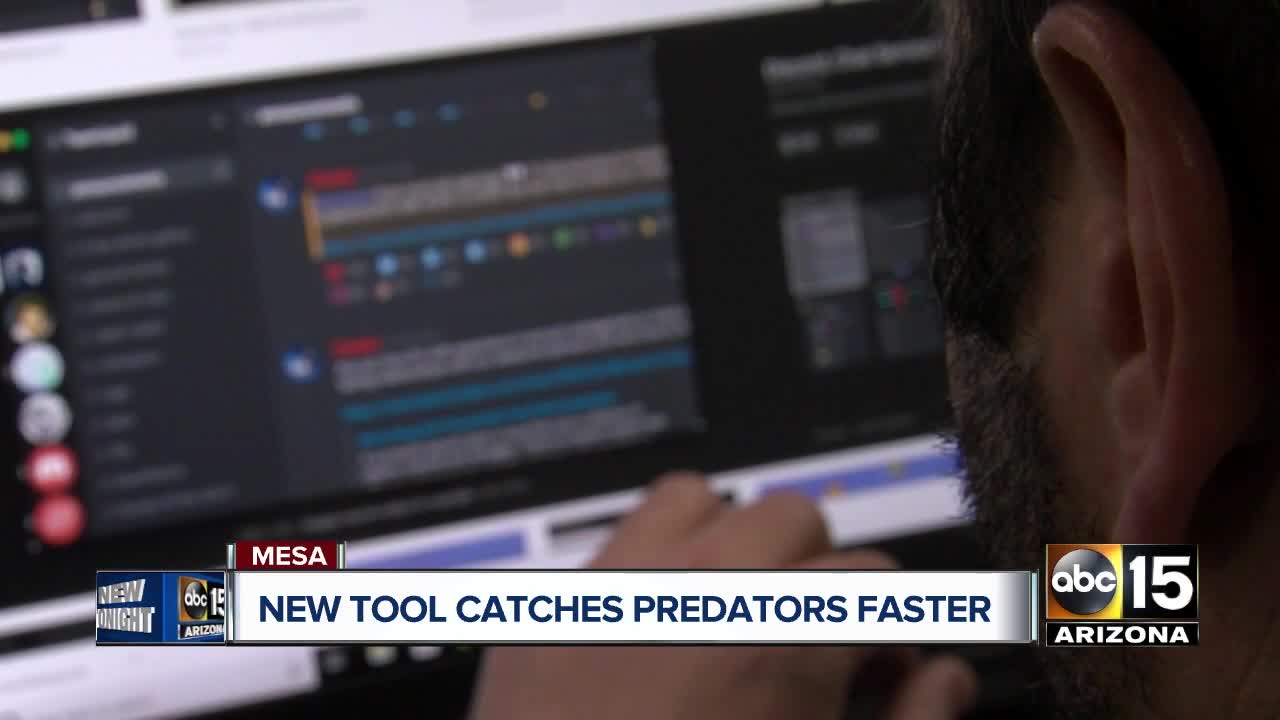 Every law enforcement agency has a specially trained unit dedicated to hunting down online predators. In Mesa, the unit is getting more help in the form of a mobile forensics lab donated to them by Project Underground Railroad, an organization that is dedicated to fighting child sex trafficking.

MESA, AZ — It is a disturbing crime that seasoned detectives say is happening every day. Child predators on the hunt for their next victim, and now with things like new technology and social media, it has made it much easier for them to reach out to unsuspecting children who think they've made a new friend.

Every law enforcement agency has a specially trained unit dedicated to hunting down these predators. In Mesa, the unit is getting more help in the form of a mobile forensics lab donated to them by Operation Underground Railroad, an organization that is dedicated to fighting child sex trafficking.

Mesa police have already put the mobile forensic lab to good use. Nine suspected child predators have been taken off the streets since the unit went online at the end of November.

One of those suspects is Scottsdale construction worker Christopher Lull, busted by police when he allegedly showed up to meet a 14-year-old girl, or that's what he thought. Detectives say Lull had been chatting with one of their undercover agents and not a young teenager the whole time. Court documents ABC15 had obtained state when Lull showed up for the arranged meeting, "Lull admitted that he brought a box of Trojan condoms with him for sex that he had stopped at a store to buy along with another item," for the teen he thought he was allegedly meeting.

Mesa Police Sergeant Jason Troth, who supervised the Internet Crimes Against Children Unit, said they see crimes like this one all the time.

"It is so easy, so easy for someone to reach out and talk to someone. I never thought about it," said Pietrzak.

Pietrzak said her family took extra steps to ensure the safety of her children. From knowing her children's passwords to limiting their screen time, and the hours they were allowed to use "technology," but even with that Pietrzak said it was eye-opening for her to see strangers trying to reach out to her children, especially in video game chat rooms as they played a game.

"We thought we had done a good job of don't talk to anyone. Turn off the chat feature; we'd look at it every once in a while there would be messages on there like 'Hey....do you want to play? Do you want to chat?'" said Pietrzak.

Social media and chatrooms were now bringing these predators right into your living room. The predators are trying to lure your children right under your nose. Thankfully, police are using technology to fight back with these predators.

Mesa police detectives work around the clock to track down child predators. Now, they could be right on their tail and make these arrests much faster, thanks to the mobile forensic crime lab.

The big white vehicle is outfitted with computers, lots of wires, and blinking lights. When out on a mission, you could expect to find trained detectives hard at work, gathering disturbing evidence that would be needed to put these predators behind bars.

"What we're going to be able to do with it is respond to scenes where we're doing our investigations and be able to harvest information that's in a digital format," said Sgt. Troth.

This eliminated the step of having to drive computers, hard drives, and cell phones to a special lab to be processed. Detectives can now get that information right at the scene of the crime.

A lot of the evidence gathered at a typical crime scene in these types of cases could include child pornography in the forms of pictures and videos, along with text messages or emails exchanged between the predator and the victim they were trying to target.

Troth said most of the time these predators would pretend to be the child's age, and a typical conversation would start with a simple, "Hey how're you doing?"

"From there it might progress to hey, send me a picture or something of that nature," said Sgt. Troth.

Mesa police have plans to share the mobile crime lab with other law enforcement agencies in Arizona.

"It is satisfying to know that we can hold people accountable for these crimes," said Sgt. Troth.

Police said most of these online predators found their victims through social networking, blogs, chat rooms, instant messaging, email, discussion boards, and other websites. They typically seduced their targets through attention, affection, compliments, kindness, and even gifts. Police say online predators are usually up-to-date on the popular teenage lingo and know the latest music and hobbies likely to interest kids.

Predators try to listen to and often try to sympathize with kid's problems. They would try to ease young people's inhibitions by gradually introducing sexual content into their conversations or by showing them sexually explicit material. They would also try to evaluate the kids they met online for future face-to-face contact.

Tips for reducing the risk of children being victimized focus around monitoring and controlling your child's access to the internet in an age-appropriate way. Make sure your children know from an early age, what is appropriate information to share with others, even those who appear to be friends. Establish rules about sending or posting photos online, and giving any identifying information about themselves or family members to strangers.

It is recommended for children to only socialize online with people they know in real life and to avoid personal discussion with strangers, especially conversations involving sex, violence, and illegal activities.