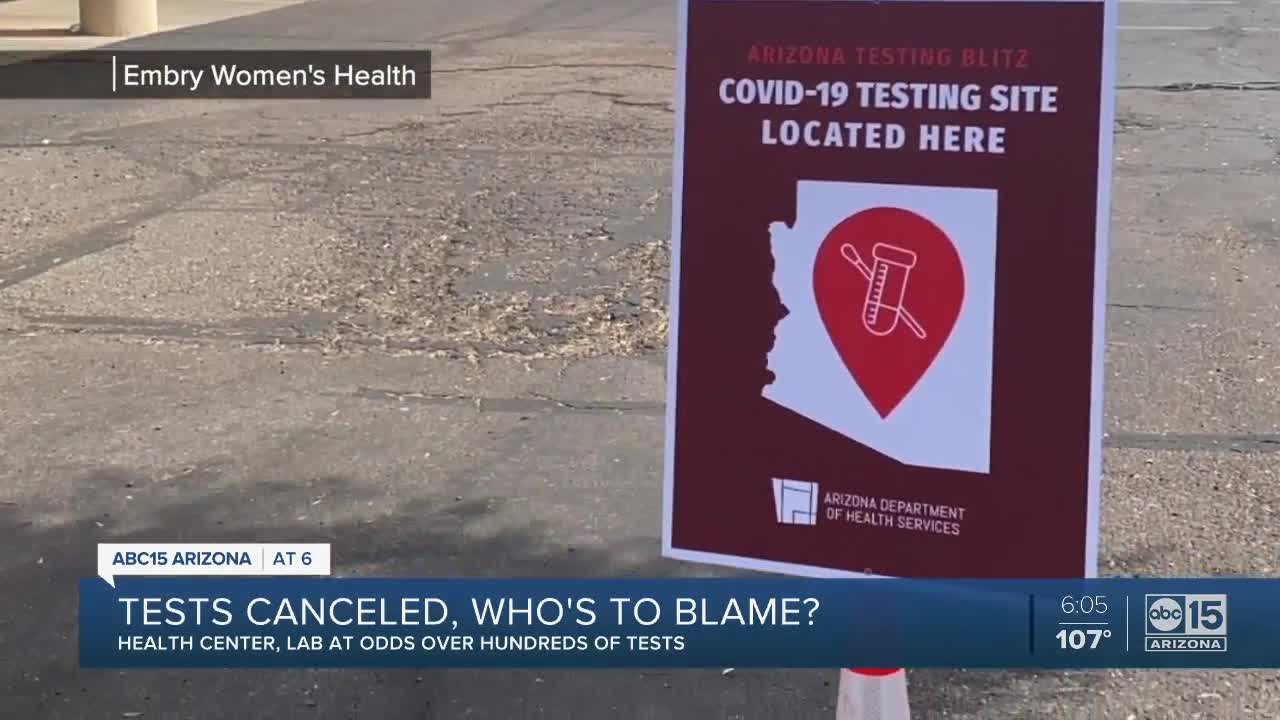 Health center and lab now at odds over hundreds of tests.

MESA, AZ — Dozens of healthcare providers continue to offer COVID-19 testing in Arizona, and some facilities have had to cancel tests due to issues with samples.

Embry Women's Health in Mesa had been working with Sonora Quest Lab for weeks during the state's testing blitz in May. Raymond Embry, the director of development, said when they started, the turnaround time to get results was one to four days.

"We've been doing testing well over two months, and we've never seen anything like this," said Embry.

Embry said problems getting COVID-19 diagnostic test results started after May 16. He said it took more than 10 days to get results back from Sonora Quest.

"Had they told us they were at capacity, and that we would expect to see results 7-12 actual days later we would've pursued an alternate action, not out of malice but simply in the interest of patient safety," he said.

Sonora Quest has updated information that says it now takes it takes 8 to 9 days due to high demand.

The next testing blitz weekend, May 23, Embry said about 800 people gave samples for diagnostic tests, but only about 400 of them got results.

"It wasn't until Monday, June 1 that we learned that all the testing from May 23rd had been put on hold."

"On May 30, 2020, Sonora Quest identified an issue with the containers used to collect and submit specimens by Embry Women’s Health for samples submitted between May 23 and May 29. Our molecular technical and quality teams began a swift and thorough investigation, while working with Embry Women’s Health to ensure the best interest of the patients were front and center. We also worked directly with our instrument vendor to investigate and confirm that there were no issues with instrumentation. Sonora Quest follows strict protocols and processes for handling all samples to ensure we are performing the highest quality laboratory testing to support our community, as we have for the past 22 years. We have investigated and confirmed that Sonora Quest followed all processes per protocol and no variances were found in our handling of the samples. Upon conclusion of the investigation, it was determined that due to concerns over of the quality of the specimens collected between May 23 and May 29, testing for those specimens were going to be cancelled due to the incorrect specimen collection container used. It was our recommendation that a recollection of a new sample would be needed. To help with completing the recollections, we have dedicated our Patient Service Center located at 1432 S. Dobson Rd., Suite 201 in Mesa for recollection on Saturday, June 13 beginning at 8 a.m., and will repeat with an additional Saturday if needed to accommodate all impacted patients. No charges have been billed for this cancelled testing, and there will be no cost for recollection.

Embry said the wording in that statement was concerning.

Embry also said he reached out to the FDA to check if the containers used on May 23 were the issue.

"The FDA stated directly that there was absolutely no problem using those specimen containers," he said.

Embry said they started using an additional lab to test patients. He hopes in the future, there will be more transparency.

"It's just concerning for us not to stay on the same page," he said.

Embry Women's Health re-tested many of the patients who never got results back. Embry said people can sign up to get tests online.