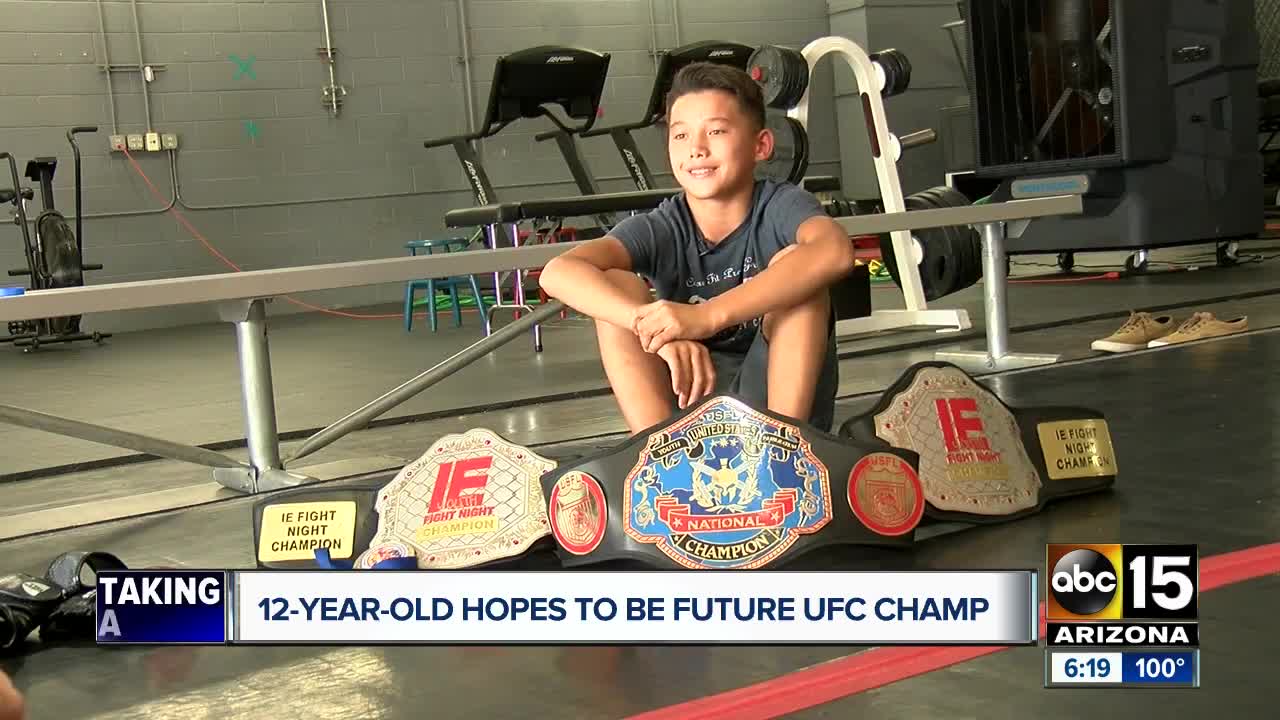 MESA, AZ — Inside this nondescript warehouse in Mesa, a prodigy is at work.

"To become a beast you have to train with a beast and that's what I do every day," said Delton Kaufmann as he sat in front of three championship belts.

Kaufmann, also known as The Real Thaiphoon, is the real deal.

At just 12 years old, he's the Arizona USA wrestling triple crown champion, a three-time kid Pan American Champion and now an IMMAF World Cadet Champion after a victory over the weekend in Rome.

The youth MMA fighter took to the sport early in life--and that's probably an understatement.

"At two three years old, it was small baby steps, single leg, the double leg, I used to do these little things with him and people would be like 'this dad's kind of crazy,'" said his dad Justin.

His mother Tanya told another story, foreshadowing a future that was yet to come.

"When he was born, my husband passed out, so he's knocked a grown man down when he was born and I was like 'Oh I guess he's meant to do this,'" she said with a laugh.

But don't let the smile fool you. As with most moms, the nerves are there.

"When he first decided he wanted to do this, I like no, mamma bear guard up, protective, this is not happening," said Tanya.

However, his passion for the art soon convinced her to step back. Now training two hours a day, five days a week with the likes of Belator Heavy Weight Champion Ryan Bader, his skills continue to grow.

"Kids like him, they come around every once in a while and they're special," said Bader. "He's in here all the time, working out with the pros, working out with us, putting in the work and in this sport that's what it takes to be successful."

While MMA is synonymous with heavy handed knockouts, there are different rules for young fighters like Kaufmann. Competitors his age are unable to strike with their elbows, knees or aim shots at opponents' heads. They're also required to wear head protection.

As for Delton's future, he says he's had dreams of it, and it all centers on glory in the octagon.

"I think I'll be satisfied when the whole world knows my name," said Kaufmann.

They're certainly getting to know it now.