A day in the life of a school resource officer 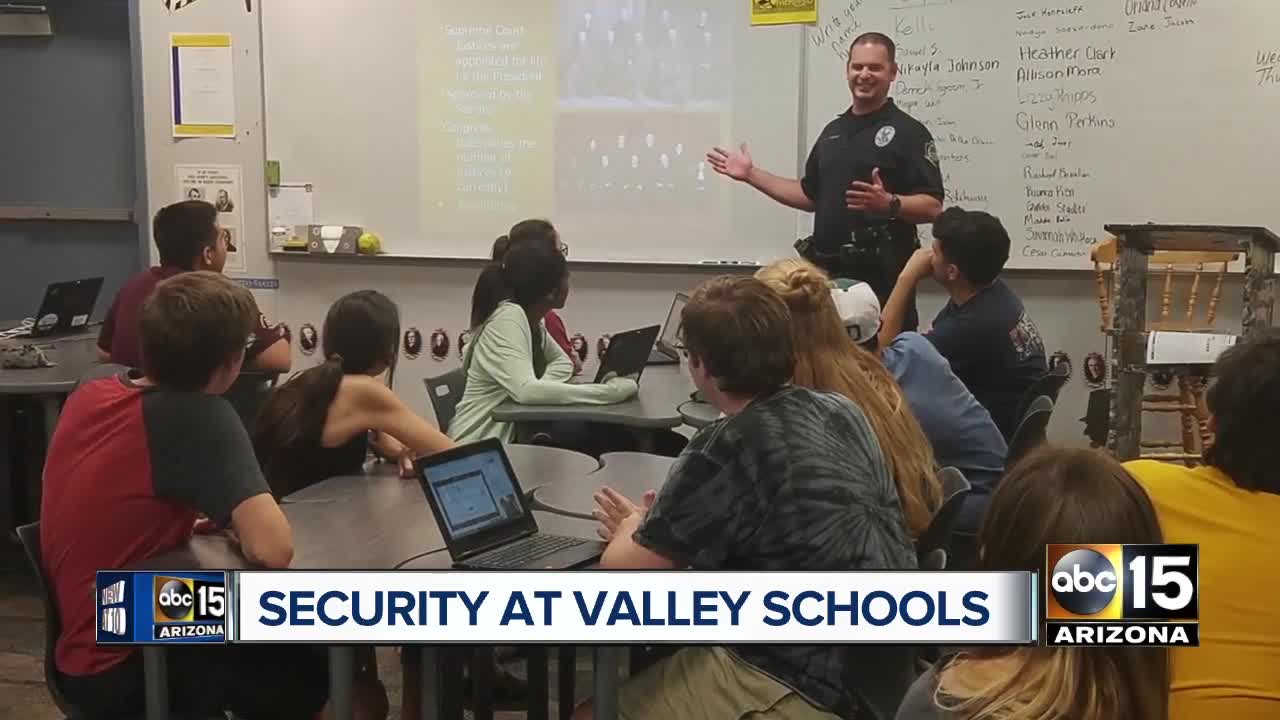 Governor Ducey has proposed enough funding to provide a school resource officer to every school that wants one.

MESA AND CHANDLER, AZ — A school resource officer for every school that wants one. It's a vision endorsed by Governor Doug Ducey addressed in his state of the state speech as part of his plan for school safety.

The Governor's $9.3 million school safety plan came in response to tragic incidents and senseless massacres of students that have taken place all over the country.

According to the Arizona Department of Education, there are 114 school resource officers at 128 sites statewide. Eighty-eight schools have been wanting to add more security on campus. A spokeswoman for Governor Ducey's office said the proposed budget should cover a school resource officer for all of those locations.

To find out the wide range of jobs these officers are doing in our schools all day, ABC15 Investigators spent the day following two officers at schools in the East Valley.

Mesa police officer J. Ingram has been a familiar face at Dobson high school for about six years.

His day started bright and early, before the first bell rang to signal the start of the school day.

"I'm really just trying to be a presence around the school in the morning. Historically violence that has occurred on campus typically does happen in the morning before or after school starts," said Ingram.

He admitted he didn't know the name of every single student at school, but he did know most of their faces.

Gabbi Buckley, an assistant principal for Mesa Public Schools, said she could not imagine school life without a resource officer. It was almost like being in a small city, full of adolescents. Buckley said it definitely added to the sense of safety and security staff, students, and parents felt in this day and age where school shooter drills are a part of life in many districts.

"The reality of it is: it could happen. We work so well together with our safety team and our security, it is definite peace of mind," said Buckley.

While security is part of the job, Ingram also helped out with injuries on campus, he handled incidents involving drug possession, and he also taught several classes.

Arizona's school safety grant required school resource officers spend 180 hours a year inside the classroom teaching law and crime prevention classes. These classes address everything from drug use, to thefts, the laws involving minors, driver's education, and even learning about the U.S. Constitution.

When it came to drugs, Ingram said it was not a big issue on campus.

"Mostly I see marijuana or marijuana oil in vapors," said Ingram. He had a box full of "fake" drugs that he used as a prop in his classroom where he showed students what the drugs looked like, and how dangerous they were.

"Well, it's a gateway to other drugs. All drugs are bad for you," said Ingram. "I try to teach kids to stay away from any influences that would bring drugs into their life."

He also acted as a sounding board for both teachers and students who were having problems in their personal lives.

"It's sad to say, but sometimes kids come to school to have a refuge, to be away from the problems of life. Unfortunately there's a lot of kids that have pretty rough lives," said Ingram.

A few miles away at Summit Academy Junior High in Chandler, officer Stephen Dieu, who has the same job, worked with students who were a lot younger.

Most of the duties were the same. Dieu said he participated in many positive intervention behavior programs on campus.

"It's the most pro-active thing I've done in law enforcement," said Dieu.

Dieu said he considered himself as a mentor to many of the children. While he also saw drugs on a junior high school campus, rather than punishment Dieu said most of how they handled these situations was to teach the children about the dangers of drugs, and to build a positive relationship with the child.

"There has been marijuana, tobacco, vape, they're experimenting from what I've seen as young as 4th and 5th grade," said Dieu.

Both Ingram and Dieu said they looked upon all of the students as part of an extended family.

Some of the classes he taught included relationship building classes that included how to handle challenges at home, and the pressures of life.

Some Valley schools even had food pantries to help children whose families struggled to put food on the table.

Officers who get into this line of policing say they love being a part of the community and the most rewarding aspect for them is not just to be a role model, but to shape a new generation of adults who will view law enforcement as a positive part of their lives. Both officers admitted they know they have already made a difference in the lives of so many children.

They knew because both officers said they often saw these students a few years later, and received a thanks for preventing them from going down the wrong road.