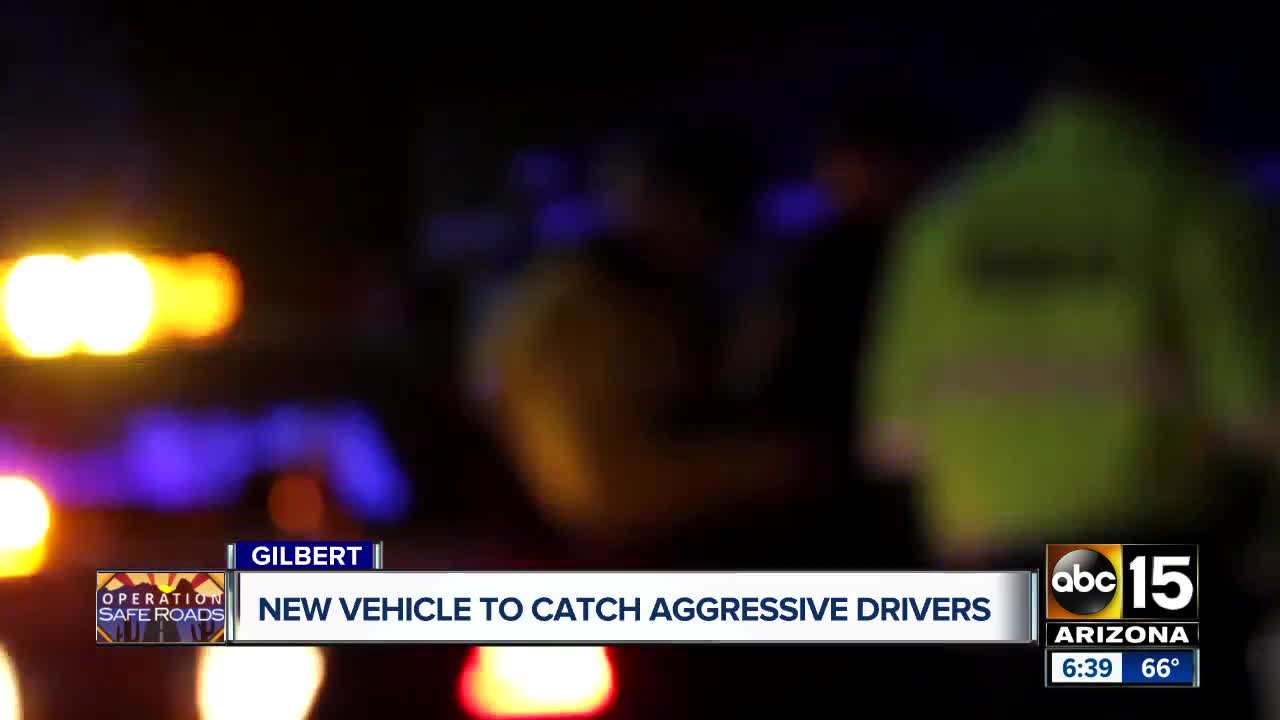 Gilbert Police have a new tool to catch aggressive drivers before a situation accelerates to road rage or a serious crash in the East Valley.

GILBERT, AZ — The Gilbert Police Department has a new tool to catch aggressive drivers before a situation accelerates to road rage or a serious crash in the East Valley.

The Operation Safe Roads team went for a ride-along inside the town's new Aggressive Driving Vehicle.

"People typically drive different around a marked police car... and this being an unmarked it blends in with the regular cars on the road," explained Detective Darren Bryant behind the wheel. "So, what we're seeing is a little bit more egregious violations."

Det. Bryant has been in law enforcement for nearly two decades. The last few years, he has been in the traffic unit patrolling the East Valley.

"Obviously, with the growth in the town - there's going to be more vehicular traffic on the roadways and then ultimately that comes with unfortunately accidents that occur, as well," Det. Bryant said.

The Aggressive Driving Vehicle has been on the roadways in Gilbert for just a few weeks. It is a four-wheeled tool given to the department through a grant by the Governor's Office of Highway Safety.

"I don't want to go out in the middle of the night to take a fatality accident," Det. Bryant said. "... I get to see the side of the job where you deal with the families and the loss of a loved one and that's kind of hard to deal with."

The vehicle is unmarked and it is supposed to blend in with everyday traffic as a way to catch offenders who think no one is watching.

"It can be speeding, it could be lane changes... failure to signal a lane change, cutting in and out of traffic... like, we'll look at this one over here," Det. Bryant said, pointing out a vehicle he was keeping an eye on.

If he spots excessive aggressive behavior, Det. Bryant will suddenly flip on the lights and trigger the sirens on the black, unmarked Dodge Charger.

"How are you doing? I'm Det. Bryant - Gilbert PD," he said, approaching one vehicle.

He wants it to spark a conversation and be an experience that will hopefully change driver behavior.

But, while behind the wheel - Det. Bryant said cell phone conversations are a big problem that this vehicle is allowing them to take more action on.

SPARKING A CONVERSATION THAT WILL HOPEFULLY CHANGE DRIVER BEHAVIOR.

"She's yacking on the phone over here," Det. Bryant said as we spotted a woman in the lane next to us on her cell phone.

She was so involved in her conversation that she had both hands off the wheel. She used one hand to put the phone up to her ear and the other to make hand motions.

"So, you know the law is in place that you can't be on your cell phone, yeah," Det. Bryant asked once he pulled the woman over.

She claimed she did not know the law was actually in place.

Governor Doug Ducey signed a hands-free driving law back in April of this year. However, there is an educational period until January, 2021. So, law enforcement personnel are only handing out warnings for violation of the law.

Cell phone use is also a concern for the department because one of their officers was involved in an accident just last week.

Yesterday around 6:40PM, a driver looking at his cell phone, ran into a unmarked @GilbertPolice police Explorer on a traffic stop on Higley Road, N/O Germann. The PD vehicle was pushed into the other vehicle. Fortunately, no one was injured. The driver was cited.#SpeedDownEyesUp pic.twitter.com/Rgwbd0CA3S

Not everyone is happy with the new vehicle addition to the squad.

On Gilbert police's Facebook page, some people wrote that they did not like the sneak attack. Others said they thought the nearly $50,000 price tag could have been used elsewhere.

But Det. Bryant said, this tool could mean he has to make one less knock on the door of a family who lost a loved one in a preventable traffic accident.

"That's our mission is to go out and try and reduce collisions by doing traffic enforcement," Det. Bryant said. "To keep speeds down and violations that are egregious that ultimately could hurt your family or my family who are on on the roadway at that time."