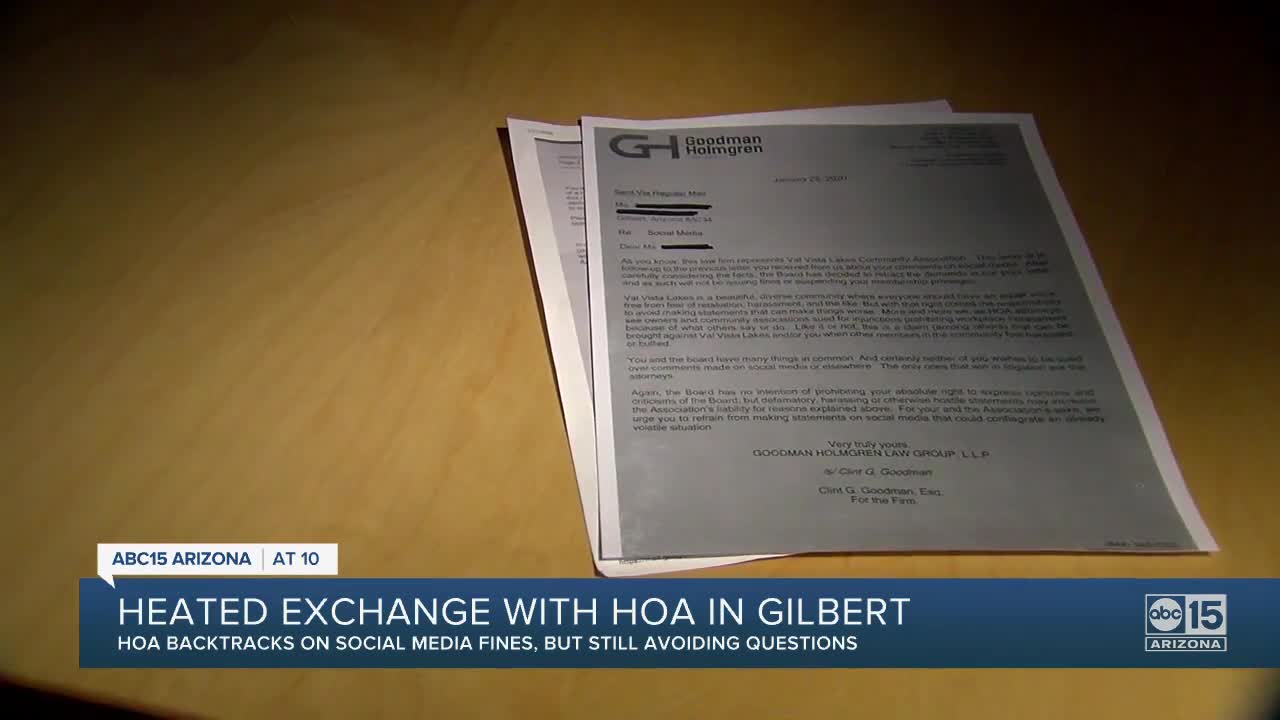 GILBERT, AZ — A Gilbert HOA is accused of trying to restrict its residents' first amendment rights on Facebook by threatening fines and penalties if residents post comments that frame the board in a negative light.

"Considering you're talking of a fine up to $250 a day and revoking your privileges at our clubhouse here, suing us with our own money, that's pretty unfair," said resident Mark Skarupa.

It all began last year during board elections in the Val Vista Lakes Community off Baseline and Val Vista roads.

People in the community were talking on a private Facebook page called “Residents at VVL” and posting critical comments about board members and how the HOA was being run.

Nardecchia lives in the Val Vista Lakes (VVL) community and since 2019, she's been the administrator of that Facebook page.

"It's all about bringing that community together," said Nardecchia.

It's your usual neighborhood page, full of events, lost dogs and safety updates. But when board elections kicked off last year, the debate over who should be seated got heated.

"It was disagreements about how certain members of the board run the board, where they're spending our money, things of that nature," said Nardecchia, recalling the posts on the page during that time. Those disagreements played out in the comments on the page.

Following the elections, the board proposed a social media policy restricting opinions about board members on Facebook.

It was dropped after a massive outcry at a community meeting.

Then a dozen residents received a letter from a law firm hired by the board earlier this month, threatening daily fines and taking away access to community amenities for the comments on social media.

All of the legal costs were paid for by resident HOA fees.

"They are asking me to basically censor the speech of the 650 members that belong to that page," said Nardecchia, who also received one of the letters.

"Clearly it's an overreach by the board," said Keith Faber.

Faber, a 10-year resident of the community and former board member, received a letter, too. He says the board has no right to restrict free speech on a private Facebook page.

"It's improper and they need to address, and maybe there should be some resignations," said Faber.

"It's kind of difficult to understand who is being served here," said former board member Ken Hassen.

Mounting frustration from the community forced the board to hold a closed-door meeting with their attorneys Thursday.

Those protesting outside the closed-door meeting question why HOA dollars are being spent to keep community voices silent.

After we continuously pressured the board, another letter was sent out Thursday, retracting their previous threats.

But some say the letter didn't go far enough.

"They sent another letter that still contained threatening language, they have not apologized and no one has resigned," said Maiden.

When the board meeting ended, we went to get answers in person.

"Do you guys have anything to say to the people who got the letters?" ABC15’s Cameron Polom asked.

"You know we did some work... they'll have a comment soon," said treasurer James Rosebrough.

"A lot of people have said you're using HOA fees for your own benefit rather than the communities, what do you think about that?" said Polom.

Then we approached Director Todd McCoy.

"I'd like to ask you a couple questions," said Polom.

After being shoved, Polom reiterated to McCoy that the community is very upset with the board’s actions to which he replied, "I don't care."

The board president refused to leave the building and answer questions.

Even prior to the meeting, residents began circulating a petition to have the president and vice president of the board resign.

Residents also say the board members should have to pay back HOA fees paid to the attorneys who advised the board on the letters.