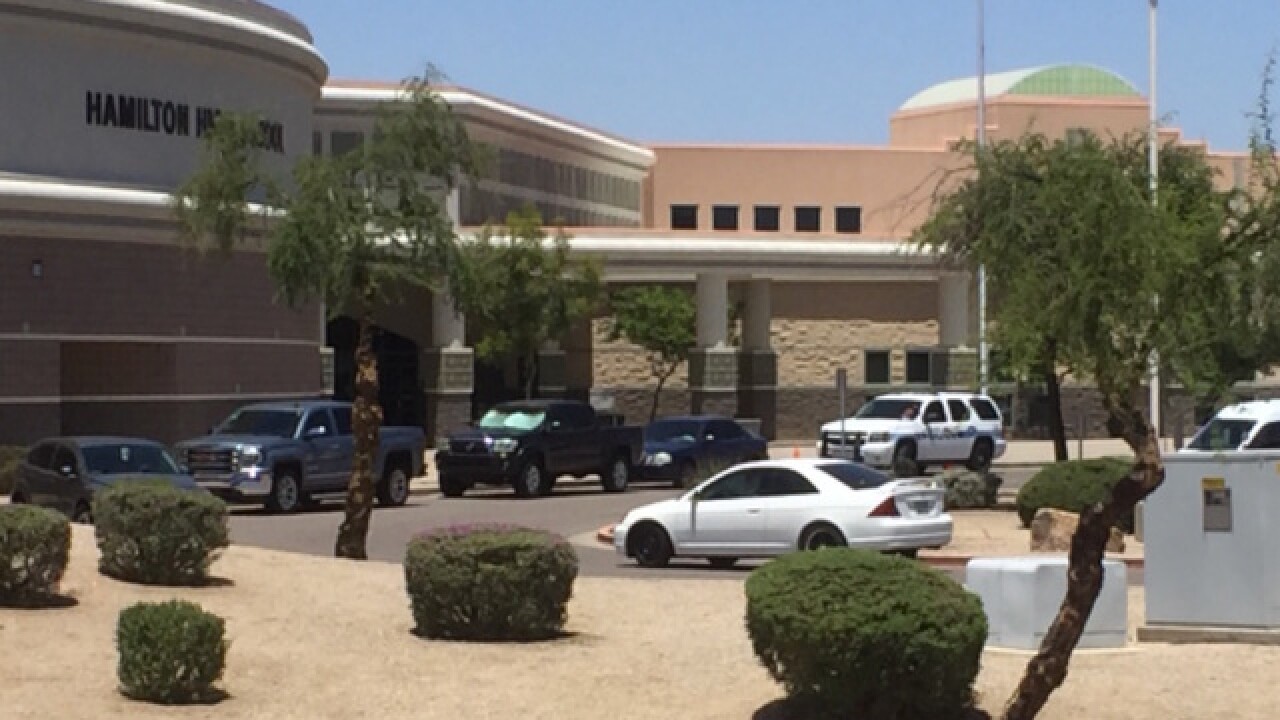 According to police, six suspects — including three football players and three administrators — allegedly knew about the sexual assaults and failed to report it.

Of the three accused football players, 17-year-old Nathaniel Thomas is the only one to be charged as an adult. The other two are juveniles and have not been publicly identified.

The report lists as many as 11 victims.

Chandler Police Sergeant Daniel Mejia told ABC15, "We have six victims that have prosecutable cases with known suspects. We also have five additional individuals that were identified as victims by at least one other person but were unwilling to participate in the investigation."

Mejia also said two of the victims are females from an unrelated Hamilton High School investigation. The Gilbert Police Department is handling that case.

The document includes items that were found in Hamilton High Administration offices with notes that mentioned "Toon Squad and Rape Squad" on the team.

The same note includes a statement that the "incidents [have been] going on for years."

Beyond the assaults, the police report paints the varsity locker room as a wasteland of fear, sexual abuse and immorality that coaches allegedly knew about.

The report described players slapping other players with their genitalia, urinating on each other in the shower, one student ate feces on a dare — among other inappropriate acts.

Some kids were reportedly terrified to even enter the varsity locker room, telling police they shower in their boxers to avoid being touched.

And the report describes a willful ignorance by Hamilton administration and coaches, who mostly stayed out of the locker room.

One player told police when a coach did walk in at the end of his assault the coach berated at the victim for being on the floor.

And coach Belles, approached by concerned parents of freshman players as early as October 2016, reportedly responded: "it's not my team" referring to the freshmen team.

The report also says that mid-season of 2016 Belles addressed the whole team saying, "...a bunch of [expletive] Sanduskys in here. Putting fingers in [expletive]? Are you guys [expletive] gay? Cut it out."

But none of this was reported to police at the time and Belles denied to police knowing anything specific prior to full allegations coming to light in March 2017.

One parent reported to police that they confronted Athletic Director Shawn Rustad but he allegedly excused the assaults as "boys being boys."

She claims he admitted to having heard about some of the incidents, but "did not feel the situation was alarming."

The report also details the culture of Hamilton High School surrounding the assaults.

Freshman players were known as "Fresh Meat" and would be assaulted and then were told "welcome to varsity."

In the report, one player told detectives, "He believed 'almost all' of the varsity players were involved and said one would start it and the rest would join in."

One parent said her son was afraid to go to practice; he even came up with illnesses to avoid having to go to the locker room.

A victim told police that Thomas, also known as Nate, is the "main leader" involved in the initiations and he allegedly violated them.

Another victim told detectives that players taunted him after one of the assaults. He also told police one of the varsity players told him "We're going to rape you."

As news of the police investigation hit the hallways of Hamilton High School, victims told police they were getting harassed.

One claimed Thomas allegedly sent a text message to freshmen players and told them "to be quiet."

The victims told police one message sent through Snapchat read, "If I get expelled, you're going to regret it."

The harassment was so severe, one parent told police they had to turn off the WiFi in their home to protect their son and now he is "never allowed to be alone, to include the gym or mall trips."

We're also learning more about a Twitter video posted, where one victim recanted his accusations against Nathaniel Thomas. Attorney's told ABC15 the boy was surrounded by bigger boys and had been threatened.

In the police report, officers said the victim was told his family would be hurt if he did not recant his accusations. The teen behind the camera has since been served a harassment order.

ABC15 also reported on a phone interview with Attorney Dan Raynak, who represents four victims in a civil lawsuit against Chandler Unified School District.  Raynak told ABC15 two of his victims had their cars vandalized.

According to the police report, we learned the victim's  "brake line" had been cut on their car. Police also learned there's a text message group named "Tune Squad."

When ABC15 broke the story via Twitter of the player's arrests, a screenshot of the tweet was sent out with the line "It's fire alarms you all."  another person replied, "No it's the raping."

One parent told police that Hamilton's football booster club warned parents of the AIA's "sit rule," and threatened if they changed schools their player would be restricted from taking the field and added "The grass is not always greener."

Police also note a former player, now an adult, told his parents the assaults were happening as far back as 2010. He talked about a player being sexually assaulted with a "broomstick" and that the incident "was broken up by coaches and other staff."

Chandler Police detectives noted several times in the report, violations were never reported to them by the administration at Hamilton High School.