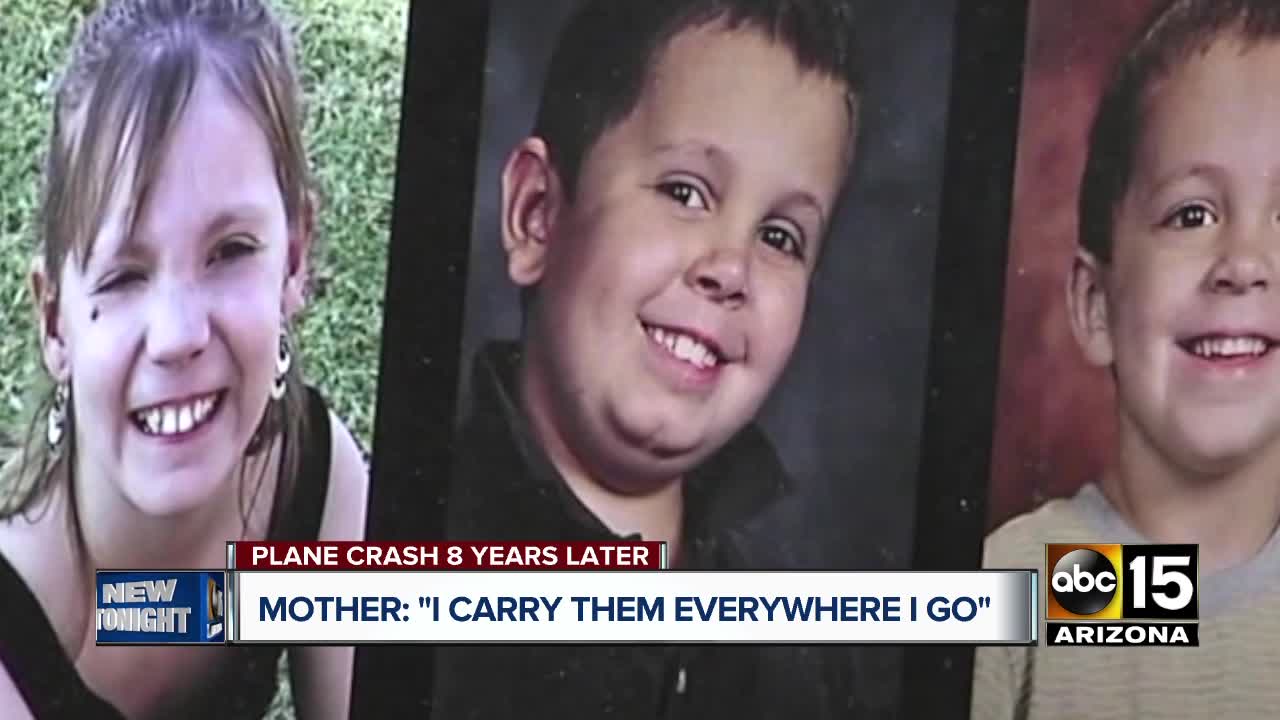 Karen Perry lost her three, young children, as well as her ex-husband in a deadly plane crash back in 2011.

APACHE JUNCTION, AZ — It was a tragedy that devastated a Valley family and rocked an entire community one day before Thanksgiving.

On November 23, 2011, the plane took off and was in the air for six minutes. It crashed in the Superstition Mountains. Karen Perry lost her three young children, as well as her ex-husband. Two other adults were also board.

"I carry them with me everywhere I go," said Perry.

So every Thanksgiving is a painful reminder of the horrific day. Eight years later, though, Perry continues to honor the legacy of her children.

"My daughter would've turned 18 in February. And my middle son would be 16 and my youngest [would] be 14," said Perry, who said she thinks about her kids every day.

Morgan "was a sassy big sister."

"My middle son Logan was a total character."

Six-year-old Luke "was autistic but he was like a savant. Taught himself how to read and write when he was two years old."

Perry said it helps to talk about her children and keep their memory alive.

"A lot of people are uncomfortable with grief," she said. "As most people who have lost a child know, the most important thing to us is that our children are remembered and acknowledged, and I do like to talk about them. And I do honor them and remember them, and the hike is part of that."

The hike is Perry's annual tradition. Every year on the anniversary, she hikes up to the crash site with at least a dozen others to reflect and remember.

She also says she receives constant support, out in the community and during the annual hike.

"People stop me on the mountain and remember my name, and give me a hug," she said. "It means everything to me."

Perry still lives a mile away from Superstition Mountain.

"It's a constant reminder, of course, but I wouldn't forget if I wanted to."

In the past eight years, the mother has written a book, started a non-profit in her kids' honor, and is working to have a 'Ribbon of Life' sculpture made that will honor all eleven people who have lost their lives during aviation crashes on the mountain.

The sculpture, and memorial bench, ensure the kids and tragedy will never be forgotten.

And that is why, on Thanksgiving, Karen will feel gratitude even though her table will have three empty seats.

"Losing them, as painful as that was, I'm so grateful that I had them and thankful that they were here."