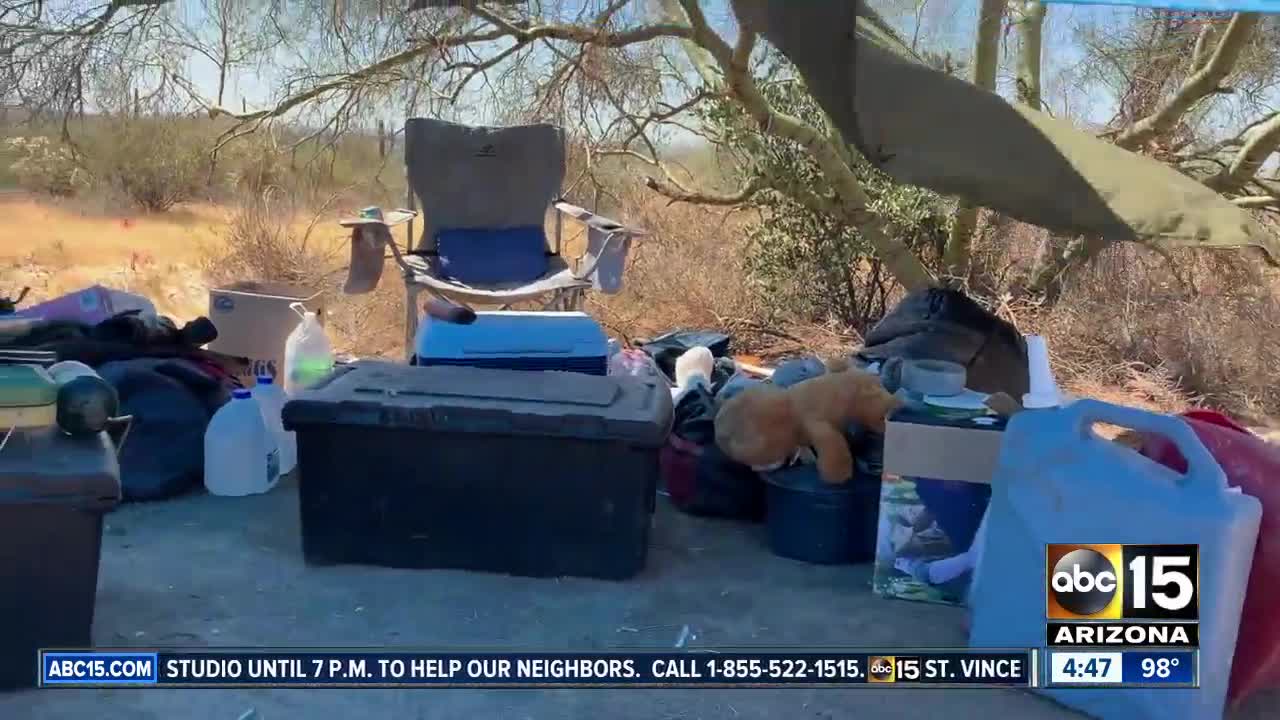 For Amber and Tom Kunau, what they see now throughout their community is an all too common sight.

"I have seen people coming and dumping entire trailer loads worth of trash, cutting down cactus and taking it with them," said Amber.

Despite two years of complaints to anyone who would listen, they say nothing changes.

"People coming in with pallets to burn fires even with the major fire danger and ban in the area," said Amber. "They speed through here in groups, we don't even feel safe walking around our homes."

"We moved out here for peace and solitude and to live in, really, one of the most beautiful areas I've ever seen," said Amber.

Beauty now threatened on a near daily basis by makeshift camps covered in trash, vandalism of saguaro cacti and boulders. Even illegal gun fire.

"It is absolute lawlessness, there's no better way to put it," said Amber.

The couple lives off Highway 88 in Apache Junction. Land with a complicated jurisdiction.

"This particular area of land is Bureau of Land Management, just a little further back in is Tonto National Forest, and just on the other side of the road is Pinal County," said Tom.

They say when it comes to stopping the issues, the buck has been passed around between the different agencies for months.

Pictures suggest it may have originated from an illegal campfire near an area known for its
homeless encampments.

"It was within a quarter of a mile of our neighbors house and our house, and if the wind had been blowing another direction who knows what could have happened," said Amber.

The Pinal County Sheriff's Office confirms the area should be enforced by the Bureau of Land Management.

Since we began looking into the story, new signs have now gone up outlawing much of the problems.

BLM also offering us this statement on their plan of action.

“The BLM Phoenix District has an ongoing and positive relationship with the City of Apache Junction on various land management issues. We are aware of concerns from local residents regarding activities in this area and BLM Law Enforcement has been working with local law enforcement to address concerns.

BLM rangers have responded to several calls from the community and increased patrols in this area. Current BLM rules and regulations set a 14-day limit on all camping. Law enforcement rangers have made contacts with campers during periodic patrols to communicate and ensure adherence to these rules. Additionally, due to dry and hot conditions, the BLM Phoenix District has implemented fire restrictions as of June 21, which will remain in place until the risk of wildfires has been reduced.”

But for Tom and Amber, words only go so far and now expect results.

"You can put as many laws and signs in place as you want but if no one's here to enforce it, what difference does it make," said Amber.