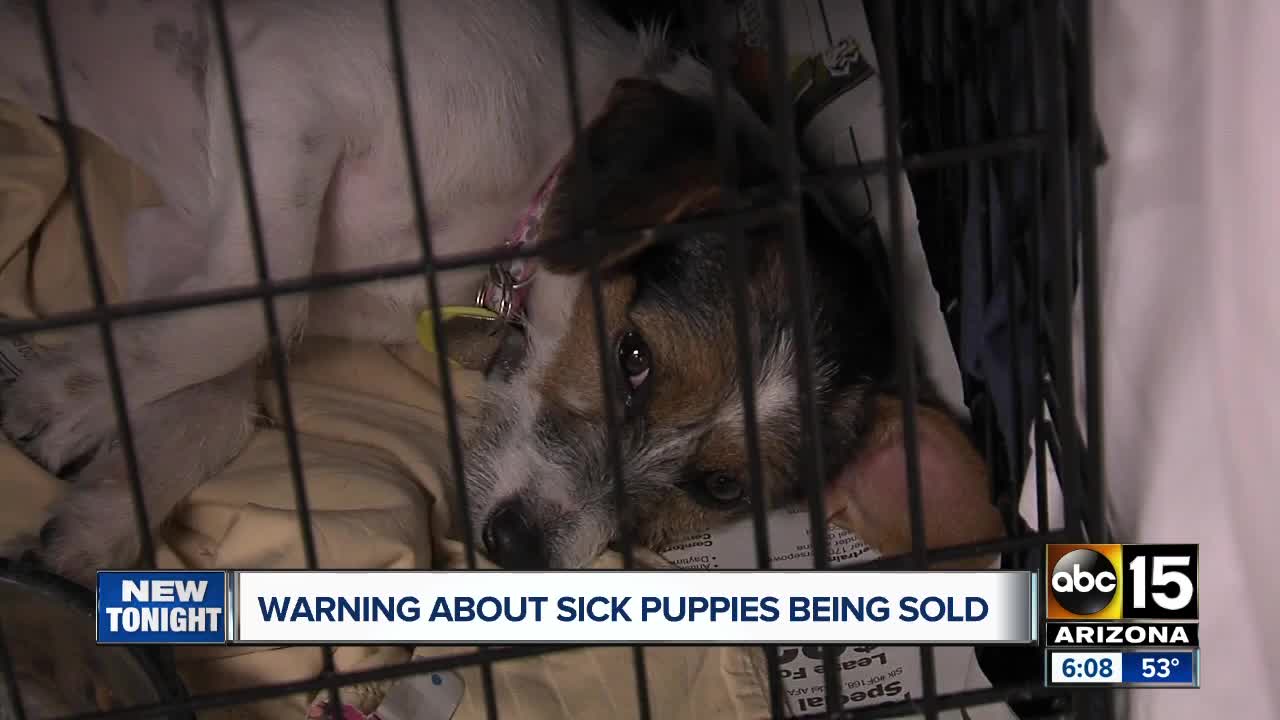 A Valley animal rescue is putting out a warning about sick puppies being sold by backyard breeders.

PHOENIX — A Valley animal rescue is putting out a warning about sick puppies being sold by backyard breeders.

With pet adoptions and sales seeing a spike during the holiday season, animal advocates say many backyard breeders also try to take advantage of this time of year to breed their animals and get more puppies out for sale.

This has resulted in Follow Your Heart rescue taking in many sick puppies, abandoned at local animal hospitals by owners who did not want to pay the vet bills associated with their care.

Colleen Kernaghan, with Follow Your Heart animal rescue, said volunteers will frequently surf social media sites to find puppies on sale by backyard breeders. In some cases, volunteers will purchase puppies to save their lives and offer to spay the dog for free -- if the owners allow it.

"We want to make buyers aware of what they may be getting when they purchase their pup from a backyard breeder or pet store," said Kernaghan. "Many times, the momma dog is forced to breed over and over again; and not provided medical care. Pups are born and are living in miserable conditions many times outside regardless of the weather. Pups don't receive medical care, vaccinations, are exposed to parvo, distemper, etc."

"They are not fixed and are also removed from their mom way too young. You may get an inexpensive pup and may not realize that pup is sick and possibly dying. Backyard breeders will continue to breed dogs in an infected environment which can pretty much guarantee future litters will be affected," Kernaghan added.

Kernaghan said she recently saw an ad from a breeder who was selling schnoodle puppies, they are a mix between a poodle and schnauzer.

"In most cases, dogs like these from backyard breeders are so sick we want to at least give them a shot," said Kernaghan.

She paid $600 for the two dogs, and within minutes, realized they were not doing well. Medical tests confirmed the dogs had parvo.

The dogs, whom she had named Mercedes and Benz, did not survive. One died a few hours after she bought them, the other hung on for a few more days but because of the deadly and highly contagious parvo virus, he died as well.

Kernaghan said even though she only had the puppies for a little while, she was just devastated.

"I fell in love with them. They were the cutest little fur balls. It's amazing how they can get into your heart so quickly, and then to see them die such a horrible death in a matter of hours," Kernaghan added, breaking down in tears.

But sorrow has turned into anger and the strong will to raise awareness and educate the community about the risks associated with purchasing from backyard breeders.

The rescue has put together a list of what to do and not do if you do proceed with the purchase of a dog from a backyard breeder:

If you have a sick puppy with parvo that you cannot care for, Follow Your Heart animal hospital wants you to reach out to them. The rescue has a special, custom-built unit called the Tigg Pen for parvo patients.

Rescue staff say unlike other hospitals where puppies suffering from parvo are hidden from the public, their isolation unit has an observation window.

The unit is named after Tigg, a seven-week old pitbull puppy who came to them with parvo. Staff say Tigg never had a chance. He had no immune system, and after fighting his disease bravely, Tigg died after three days.

Tigg's picture went viral on social media and the rescue received donations from all over the world, which helped them create the parvo unit that is now dedicated in his memory.

"These rooms are dedicated to Tigg's memory and are an enduring thank you to him for reminding us that you don't have to be big to be important," said Follow Your Heart founder, Debbie Varner.

She added that the average cost to treat a parvo puppy at an emergency room veterinary clinic could run up to $1,000 a day. Her clinic charged between $300-400 a day. They saw many people surrendering their dogs once they knew they were sick, and the rescue would try to return their pets to them with a payment plan.

To learn more about the rescue or the Tigg pen visit, click here.

The rescue is encouraging the community to adopt pets from the county animal shelter or other reputable rescues. Even if you are looking for a special breed, Varner said you could find it with some patience.