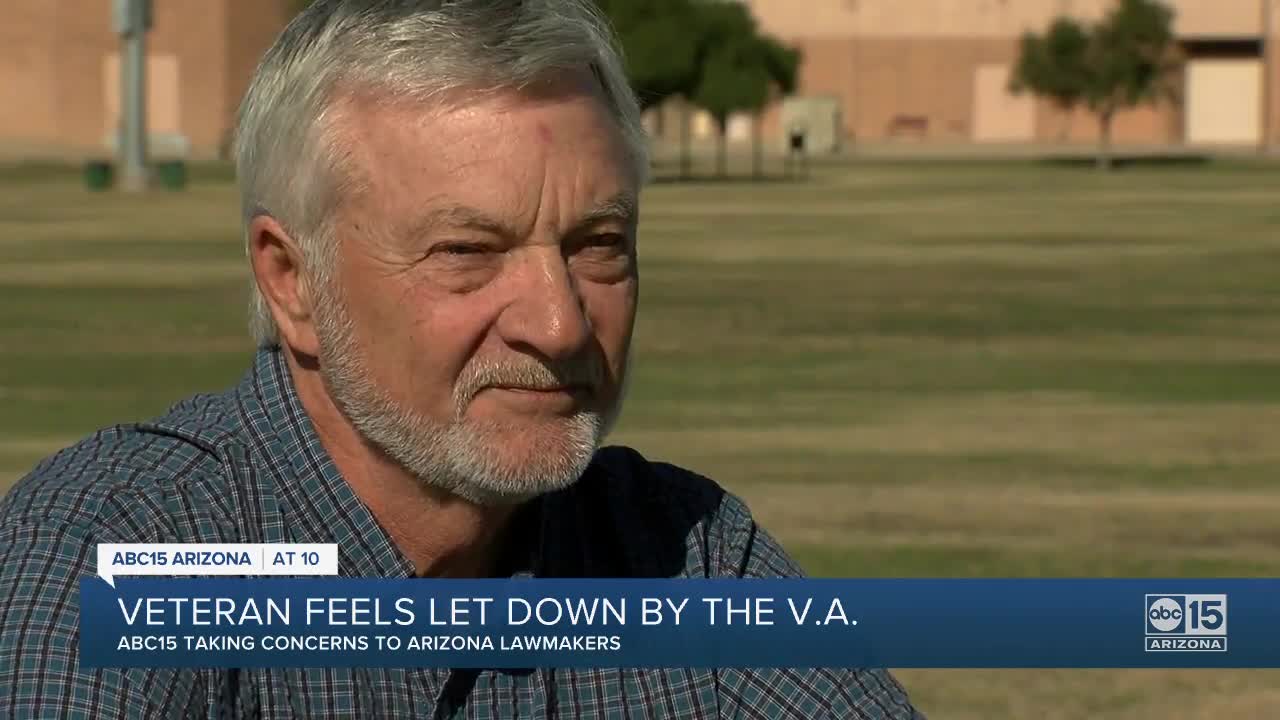 Ortman reached out to ABC15 to say that he has been trying to get an appointment with a mental healthcare counselor since November and all he got was the run around.

First, he was told his paperwork was lost and he would be outsourced to an outside healthcare facility due to a shortage of available counselors.

He was then told that a doctor forgot to sign off on his paperwork just to get him to go in for an assessment before they could sign off on any paperwork.

Ortman is one of the several veterans or veteran’s family members who reached out to ABC15 over the last few months, saying they feel let down by the VA healthcare system. Some of those veterans have since died by suicide.

Their stories are just a snapshot of the pain and heartbreak many veteran’s suffer as America loses 6,000 vets to suicide each year.

“I don’t know what to do. You just feel lost. You’re alone,” said Ortman.

For Ortman, it’s been one disappointment after another since he got home from Vietnam. First he had to deal with the pain of seeing friends who didn’t make it home, then a homecoming he did not expect.

"Coming home was traumatic. The first place we landed was in San Francisco. I think they just had designated spitters there. They spit on us they called us baby-killers. There was a sign on the grass that said dogs welcome, Vietnam vets keep off," said Ortman.

After spending weeks out in the mountains of Vietnam, carrying nothing but a rucksack and poncho, sleeping on the ground, and drinking water out of streams, the toll of war finally started setting in for Ortman, years after he came home.

"I didn't know what was wrong for a lot of years. I had anxiety attacks, trouble in crowds, trouble with loud noises. Personally, I have to isolate myself a lot," said Ortman. He added that he had to be hospitalized many times due to his anxiety attacks.

Doctors have diagnosed Ortman with PTSD or post traumatic stress disorder. He thought about ending his life many times.

"Thought-wise yes, quite often. Even going to the extreme once," said Ortman.

Despite the pain, Ortman said he has been willing and eager to seek help. Now he's trying to get back into the VA healthcare system and he has had a lot of trouble trying to set up a basic appointment.

Ortman said he tried to work with a patient advocate at the VA who told him they were going to have to outsource him to a practice outside of the VA due to the lack of available staff. That was on November 20, 2019.

"You're just lost in the system," said Ortman.

After Ortman told the VA he had reached out to ABC15 for help, he said he got a call back right away. He now has an appointment to see a therapist within the next two weeks.

"The VA is overwhelmed. they're just, how long have there been wars with all the veterans now, they just can't do it. They're just overwhelmed," said Ortman.

ABC15 reached out to Arizona senators Martha McSally and Kyrsten Sinema with Ortman's story. Both senators have been passionate about veteran's affairs.

Senator McSally is a veteran herself who uses the VA system for her own healthcare and called herself a "secret shopper" of sorts.

Senator Sinema serves on the Veteran's Affairs committee. Both lawmakers may differ in political ideologies and have different agendas, but talking to them you see they share common ground when it comes to passion for protecting those who served and protected us on the frontlines.

Senator McSally said she had urged the VA secretary to prioritize patient care at the VA hospitals, but she did commend the department for making some big changes in the last few years.

"They hit a real low point when Phoenix was crisis ground zero and we had veterans literally dying while waiting in line for care, " said McSally. She stressed that change sometimes takes a while to set in.

"It is often challenging to implement the cultural and training changes all the way down to every man and woman, but I believe we have the right person in charge right now. We have to make sure every employee at the VA cares about veterans but the VA has seen big improvements," said Senator McSally, adding that the agency needed to make sure they did not act like a bureaucracy.

"Instead of having a bureaucratic answer, have it be honor and respect and high quality. Make it happen. Whatever it is going to take in order to help this veteran. We need every employee to have that in them," said McSally.

Senator Krysten Sinema also agreed many improvements had been made at the VA over the last few years.

"First, we now have emergency mental health services for veterans throughout Arizona. That is a critical change. Second, there are social workers in every VA emergency room 24/7 to help veterans in crisis. They can also now get care in the community if services are not available at a VA hospital or VA center.

You can read more about the Mission Act co-sponsored by Senators Sinema and McSally on Sinema's website.

But Sinema also pointed at work that still needs to be done to continue to improve the VA.

"They are struggling to adequately hire and retain qualified professionals. There are some veterans who are complaining it is still too hard to get referred to outside services through the Mission Act when the VA cannot meet their needs," said Sinema.

Senator Sinema's office has also introduced a bill that would create networks of support for service members transitioning to civilian life. This came after the death of Sgt. Daniel Somers, who served two tours of duty in Iraq, and came home with traumatic brain injuries and PTSD. Somers lost his life to suicide in 2013.

Her office has also partnered with ASU to survey how Arizona can improve VA services. She hoped to see every veteran and their family members fill out the survey. You can get access to it here.

ABC15 also reached out to the Phoenix VA for a comment.

A spokesperson from the Phoenix VA sent us this statement:

“When a Veteran expresses concerns about VA benefits or services, we contact them directly, just as we have done with this Veteran.

The MISSION Act [missionact.va.gov] gives Veterans real choice over their health care decisions. Now Veterans have permanent choice to see non-VA doctors whenever it’s in their best medical interest. With MISSION, the future of the VA health care system is in the hands of Veterans – exactly where it should be.

And to get veterans the care they need when they need it, VA patients facing a 20-day or more wait time for primary or mental health care, or non-institutional extended care services, have the option of choosing a community provider who can deliver that care faster. For specialty care, the wait-time standard is 28 days.

In the first 7 months (June to December 2019) since the rollout of the MISSION Act’s community care provisions, VA referred more than 1.7 million Veterans for care in the community.

This is thanks to the more than 6,400 local urgent care providers that have partnered with VA."