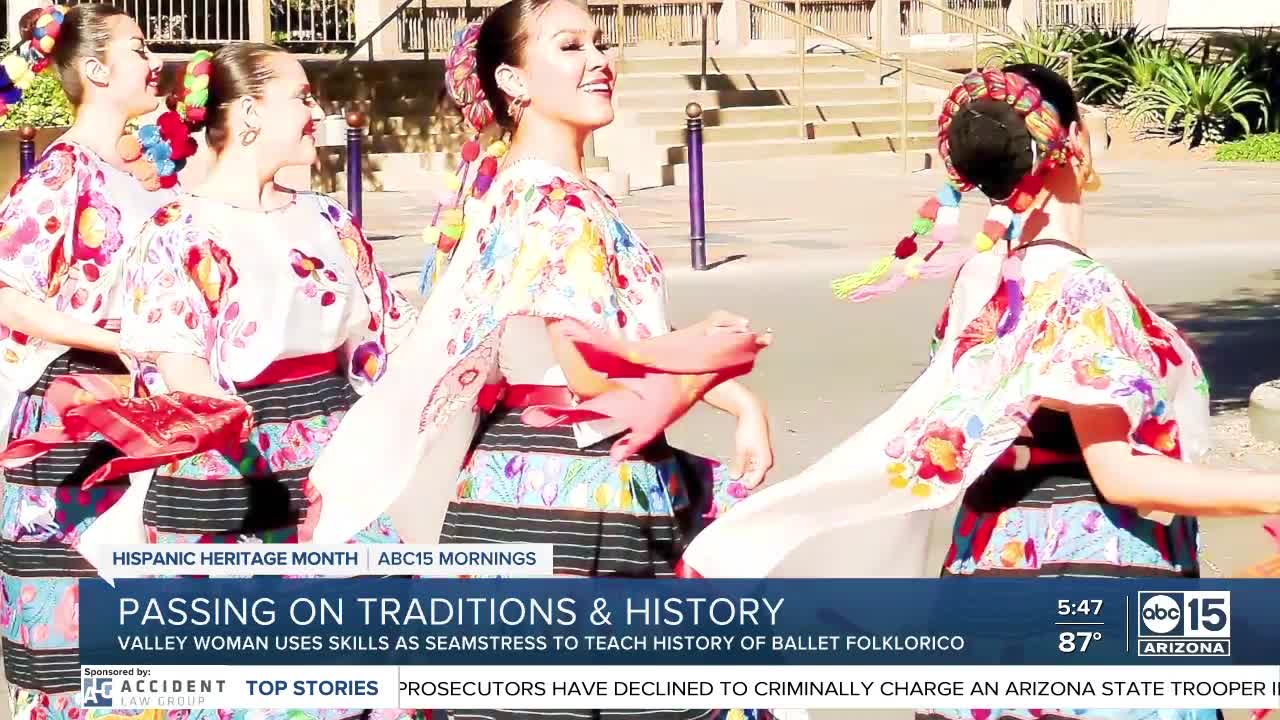 History can be taught in different ways. One woman in Phoenix is using her sewing skills to share with generation after generation, the customs and traditions of Ballet Folklorico in Arizona. She hopes her work will inspire others to keep passing it on.

PHOENIX — History can be taught in different ways. One woman in Phoenix is using her sewing skills to share with generation after generation, the customs and traditions of Ballet Folklorico in Arizona. She hopes her work will inspire others to keep passing it on.

Mary Leon is known as 'Maria' to the dance community. She's participated in hundreds of performances and made countless dresses in the decades she's been involved in the local scene. Growing up, Maria had never seen anything like it.

Leon said, "My mother and dad, when they wanted to go out, get the kids out, we'd go to the drive-in and then we go to see all the Spanish movies, Spanish-language movies from Mexico," in the ​1960s. This was how Maria first saw the lively dances. She was hooked.

"By 19, I had found a teacher at ASU. I joined one of the groups there. And after I graduated, we met up with a group from Mesa Community College and we were all dancing. We all wanted to learn more."

Leon traveled with the group to Mexico to learn and instructors in Arizona would bring people from Mexico to teach.

This is when she first learned to make the dresses. Leon said, "I took the costuming class from a lady... from Guadalajara, who could just cut without even measuring and so I'm going, 'Whoa!'"

But she learned and eventually found her groove. "You make mistakes and the very first dress I made, I cut and it was not wide enough. I mean, you really have to make sure that you cut it so that it comes all the way up. And so that was my first mistake. It would hitch up, you know. But the thing is, after that, we kept learning," Leon remembered.

She wanted to pass on what she'd been learning, saying "The process of disciplining yourself to learn steps, to learn costume, to learn tradition, to learn what's the story behind the bands...it became like a labor of love and I wanted to share it. So I became a teacher in 1975 after I came back from Guadalajara."

The colorful dresses weren't easy to find or make and Leon wanted the students to know that.

"I make them come in and sew ribbons on. I make them, do stuff so that they'll see how much work it is," she recalled. She does this while leaving them with an education in tradition, letting them know how each little detail is a piece of history.

Ted Ruiz was one of her students in the early 1990s. He's still dancing and now teaching along with Leon as the co-director of the Primavera Folklorico Dance Company.

"It's more than just, you know, putting on a hat and putting on a skirt and going. Each vestuario tells the story and represents something so if you change the color of the visual audio you're changing the tradition behind it," Ruiz said.

For example, the dresses from the state of Veracruz showcase lace due to the heavy Spanish influence. The Jalisco dresses celebrate the Indigenous influence of the region with brightly colored ribbons. Some of the polka music in northern Mexico is influenced by European settlers. And the steps themselves tell a story.

"There's a step called 'sacando agua.' And so it's a combo, it's a gesture like (pumping water). Right, but so back in the day, like in the little pueblitos or the ranches people would have to pump their water...So, that is what the movement is imitating, is the pumping up the water," Ruiz relayed.

Ruiz and Leon hope to pass along tradition but for Leon it's also been about weaving the dresses, stories and steps into kids' stories and showing the potential each one holds.