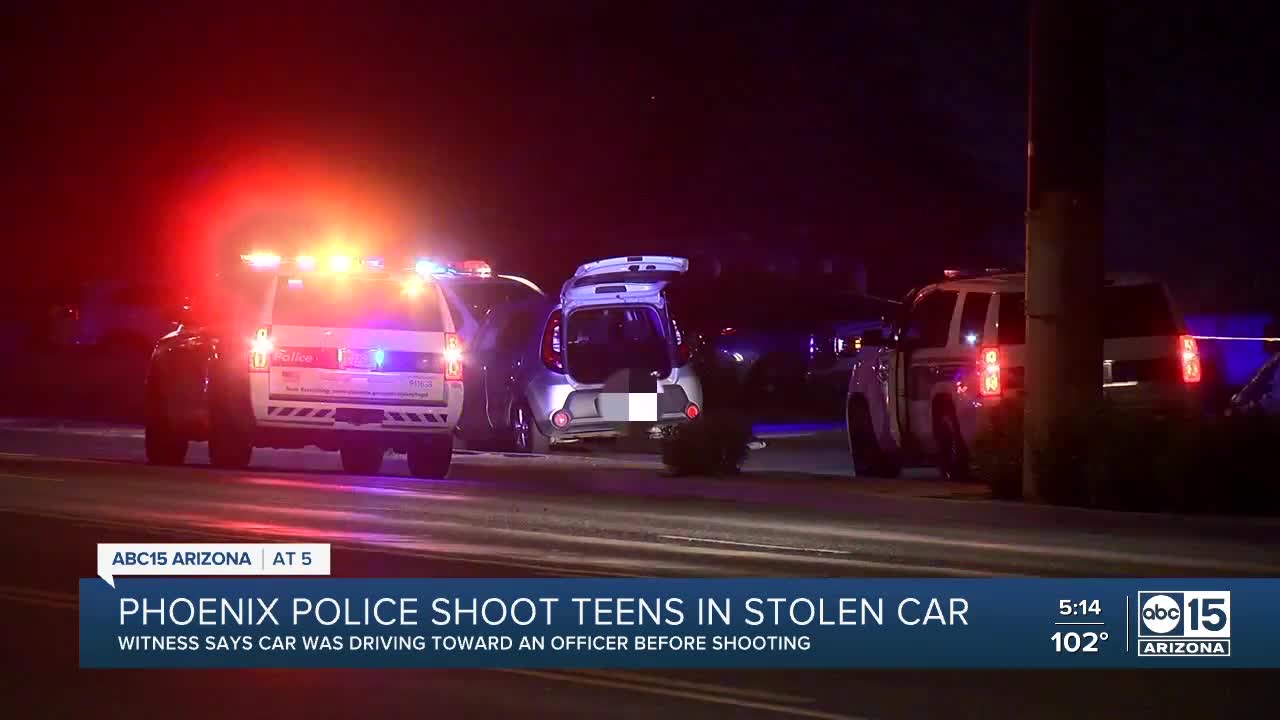 Witness says car was driving toward officer before shooting. 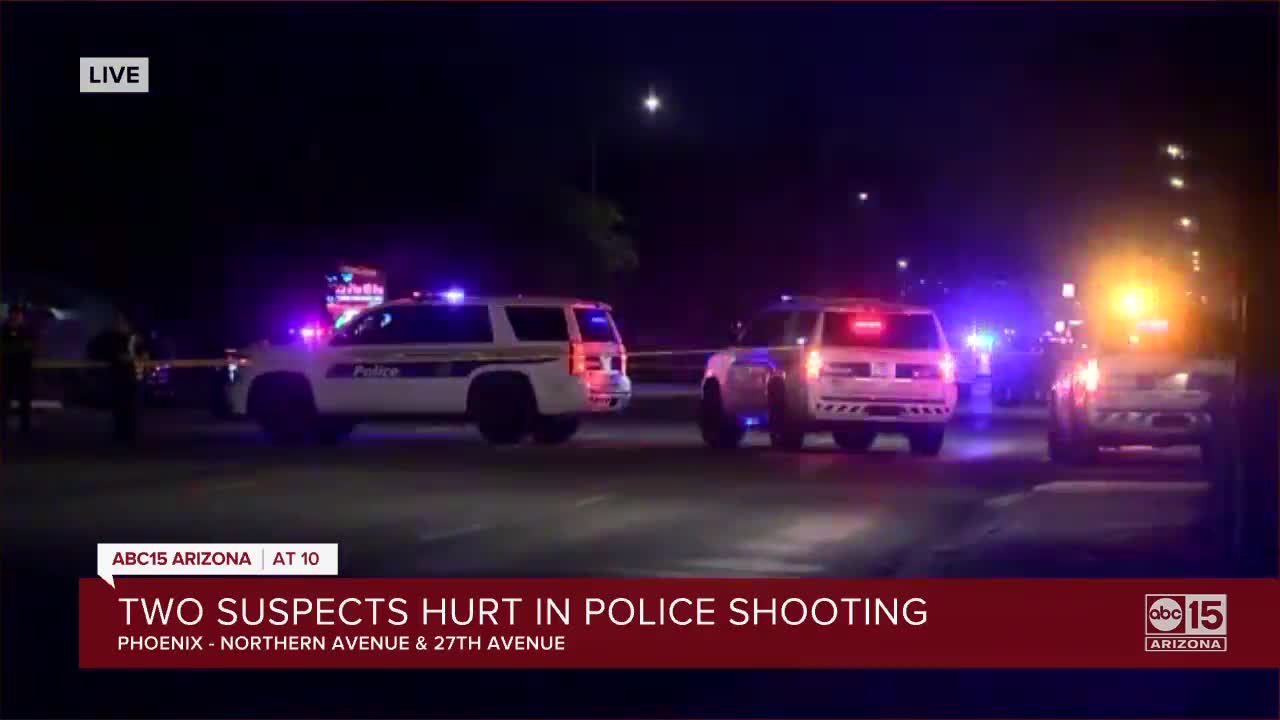 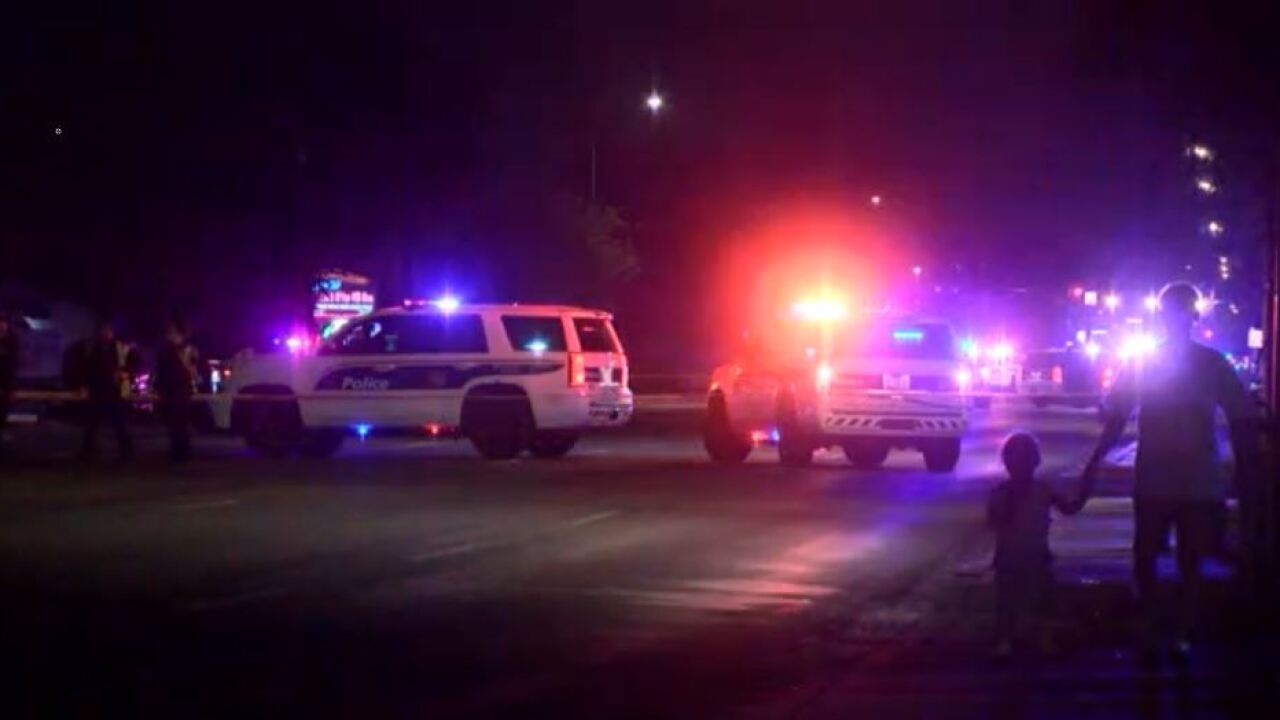 PHOENIX — Two teenage suspects were injured after stealing a man's car and being shot by officers in Phoenix Sunday night, according to police.

A 15-year-old boy remains in hospitalized and critical condition after being shot by Phoenix police while driving an alleged stolen car Sunday night.

The boy's 16-year-old passenger was also shot, and he is now out of the hospital and facing an armed robbery charge in juvenile court. Police have not released either boy's name.

The initial police call came in around 8:45 p.m. for an armed robbery near Interstate 17 and Dunlap Avenue. The victim told police he was approached by two people in the parking lot of an apartment complex. One teen reportedly pointed a gun at the man and demanded his vehicle, so the victim gave up his car keys and the pair of suspects drove away.

Phoenix Police Department officials said patrol officers located a stolen vehicle stopped in traffic along 29th Avenue near Metrocenter Mall and Castles N' Coasters. The officers exited their vehicle and approached the car on foot, giving commands to exit the vehicle, according to a police spokeswoman.

Alejandro Lopez told ABC15 he was in a left turn lane, directly behind the suspects, when he saw an officer walk up in front of the stolen car.

"When the car started to go forward, he kind of just stepped to the side and opened fire," Lopez said. He added the car moved about three feet before the shooting began. He heard five to six shots and saw flying glass, before watching the driver step on the gas to get away.

Lopez's account matches what police reported, that the suspect drove toward the officer and both officers fired their weapons. The officers involved are 24 and 25 years old with two and three years of service.

A department spokeswoman would not comment on whether their tactics at the time of the shooting were within Phoenix Police policy, but she did point to the policy that pertains to use-of-force and vehicles.

Phoenix Police Operations Order 1.5 states, "Employees will not deliberately place themselves in the path of a moving vehicle or one capable of immediate movement“ because "this is generally considered tactically unsound.“

“Employees will not shoot at or from a moving vehicle,“ the order continues, with few exceptions including "under extreme, life-threatening circumstances.”

Many major police departments have similar policies to protect the safety of officers and the public. An officer standing in front of a moving vehicle is at greater risk of being run over. Also, the officer has a greater chance of missing a moving target. if the officer is successful at shooting the driver, the result may be an uncontrolled vehicle speeding down the road.

Lopez, who had his younger brother in the car, said he was surprised to see what happened, but they were not injured, nor was anyone else.

"I was just thankful," Lopez said, "because of how close we were."

After the shooting, the suspects' vehicle continued to drive southbound on 29th Avenue and the officers followed. The driver stopped near 29th and Northern avenues, where the passenger exited the vehicle. The driver later surrendered after less-lethal munitions were deployed, according to Phoenix police.

Investigators say a handgun was recovered from the vehicle.