Bomb expert weighs in on series of explosions in the Valley 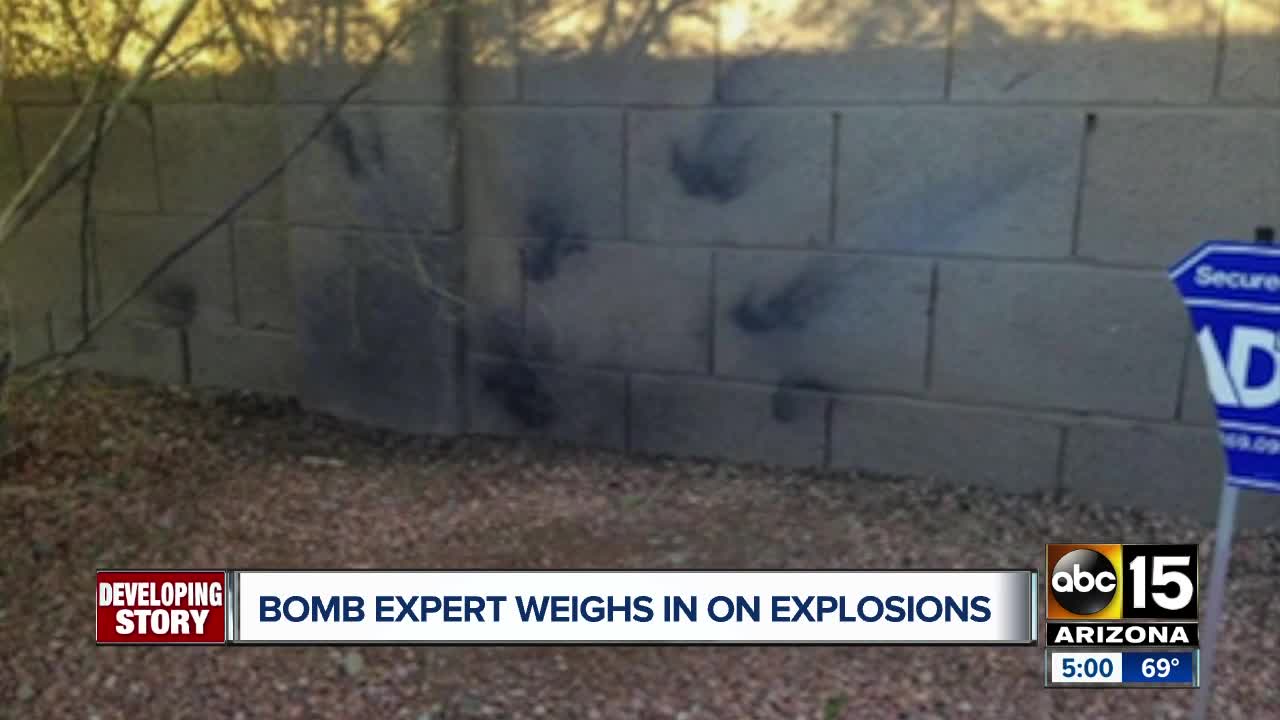 Since October, folks living west of Interstate 17 between Thunderbird and Happy Valley roads have been bombarded by explosions. ABC15's Cameron Polom spoke with an explosions expert on the matter.

PHOENIX — Since October, folks living west of Interstate 17 between Thunderbird and Happy Valley roads have been bombarded by explosions.

The constant barrage of loud booms now has local law enforcement on the clock to figure out whose behind them.

"It's a terrorist attack, the motive to be determined," said Steve Hooper.

Hooper spent decades training FBI bomb technicians. We had him take a look at surveillance videos capturing the explosions as well as witness statements.

All in hope of him giving you an idea of the seriousness of what many are now calling a rogue bomber detonating devices around the Valley.

He says whoever is making these devices could easily learn their technique on the internet.

He says based on the blast impact, the suspect is using significant amounts of flammable powder to carry out the explosion. Powder that could come from an array of products such as legal fireworks.

"Those can be taken apart, those can be combined, you can find enough stuff on the internet to put it together," Hooper said.

What began in a single neighborhood now comprises 150 reports across 36 square miles.

While no one has been injured so far, something he says is only by chance, that could soon change.

"If just seeing an explosion go off on the ground, or blowing up a trash can or a mail box, doesn't excite them anymore they may try to experiment and go beyond what they're doing now and who knows that may or may not include adding shrapnel," Hooper said.

He says investigators most likely have a grasp on the bomber's signature.

"They've probably brought in additional experts, ATF, FBI, at least to take a look as good as they are they probably have a theory on how these were designed," Hooper said.

Even with that information, he says they're most likely hesitant to release further details as they close in on the clues that may lead them to their suspect.

But with fear riding high, he says local law enforcement must reassure the public soon.

"They're gonna have to put out something soon, they really are because people are gonna be screaming what are you guys doing," Hooper said.