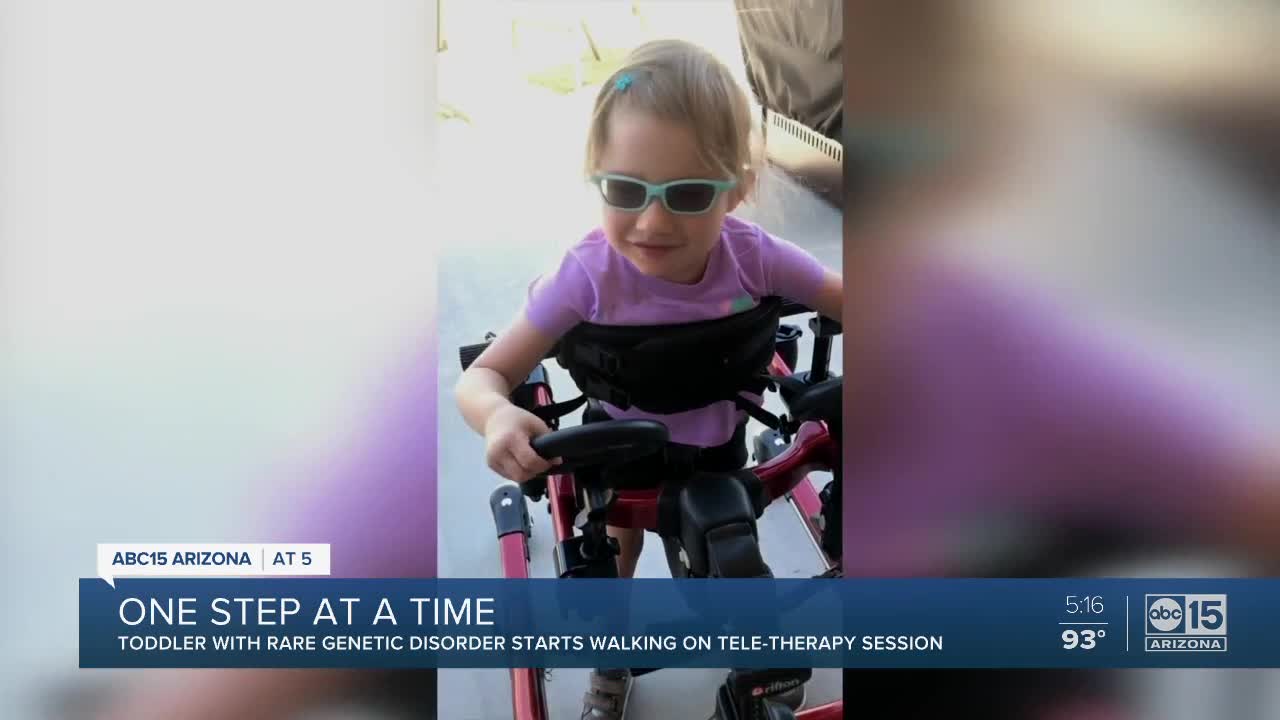 From doctors to psychologists and even physical therapists, it is not uncommon to see practitioners offering teletherapy visits to clients to keep them safe from COVID-19.

PHOENIX — From doctors to psychologists and even physical therapists, it is not uncommon to see practitioners offering teletherapy visits to clients to keep them safe from COVID-19.

This continuity of care can be so important to someone who is already in therapy, especially for families who have children with special needs.

One Valley family has seen amazing results through this teletherapy and even witnessed a breakthrough moment for their daughter, who is diagnosed with a rare genetic disorder called Pitt Hopkins syndrome.

Due to this condition, five-year-old Alexandra has had little muscle tone, so her arms and legs do not have as much strength as another child might.

Alexandra's mom Nicole Anderson tells ABC15, their daughter has a tough spirit. She goes to physical therapy five days a week, for hour-long sessions. These sessions continued after the United Cerebral Palsy Association of Central Arizona closed down the clinics during the pandemic, and switched families to online therapy.

Anderson said right before the clinics closed, they had switched Alexandra to a different type of walker, suited to her size and were starting to see some promising results. The child who had been unable to walk without being coaxed or encouraged, was starting to move her feet a little bit more. The moments were captured on camera by her father. During a tele-therapy session with her physical therapist Atelie Ho Lem, Anderson said, things really just clicked for Alexandra. Their child was finally making the effort to walk on her own, without much coaxing.

Ho Lem said witnessing Alexandra taking her first real steps all around her house was an overwhelming moment for her.

"She is a sweet little girl that wants to move, she wants to play," said Ho Lem. When I see them accomplish these milestones, it really is just overwhelming," she added.

In a world where successes were measured in "inch stones" instead of milestones, Anderson said this was a big leap for Alexandra.

"It's just amazing. It is honestly amazing when you're told at ten months of age that your child may never walk, and then you work so hard for so long everyday to try to get her to walk," said Anderson.

Alexandra is now using her walker and pushing herself more everyday. She is also about to become a big sister soon, as Anderson is getting ready to have another baby.

They call this a big moment for them, as a family.