PLEA President: "Morale has never been as low as it is now" 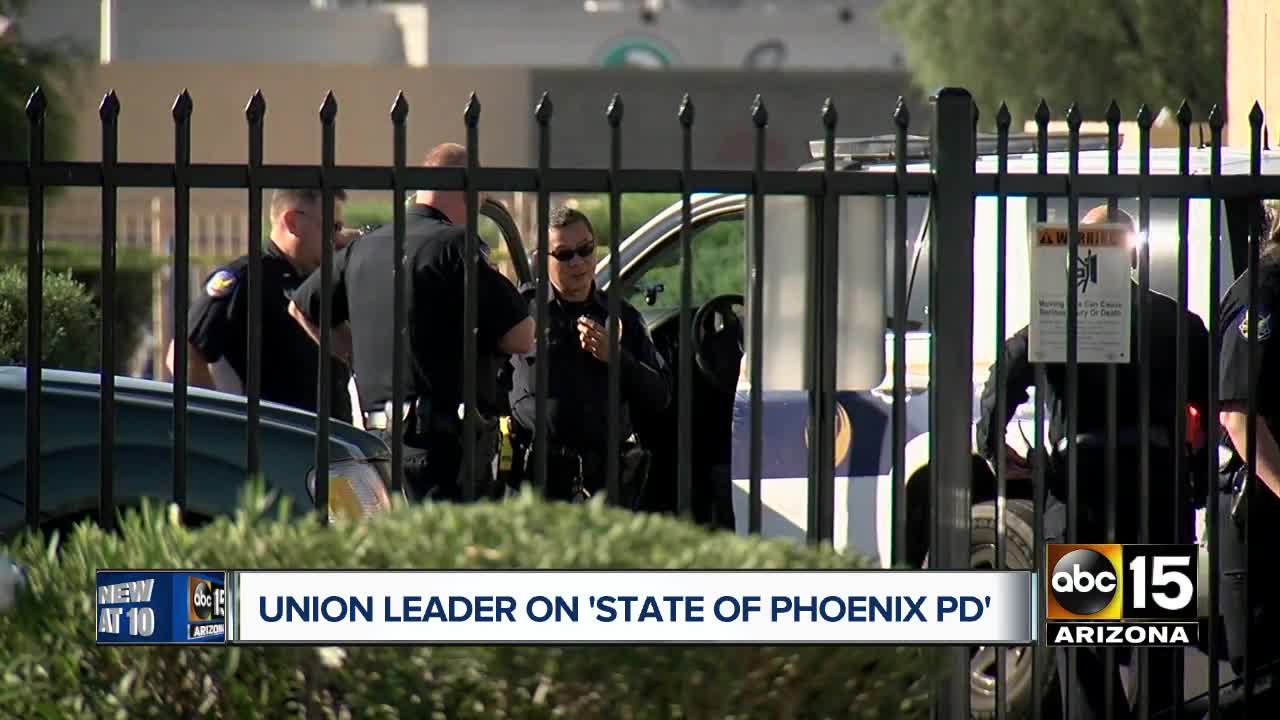 Phoenix Law Enforcement Association outspoken about Chief Jeri Williams and the current state of the department.

PHOENIX — It has been an eventful two weeks for the Phoenix Police Department. Multiple officers were fired by the chief, the police union discussed with members a potential vote of no confidence, and an officer was shot in the line-of-duty.

London almost always backs the officers he represents, which is why he was not a fan of Chief Jeri Williams's decision to fire Officer Chris Meyer and Detective Dave Swick.

Meyer's use-of-force made national headlines when witnesses recorded him interacting with an African American family accused of shoplifting. Swick was terminated after the Plain View Project found extensive social media posts that were anti-Muslim and promoted violence.

A disciplinary review board makes recommendations about how to handle the alleged misconduct, but the chief chose to fire both. "I made my decision because I know the trust was eroded and the brand known as the Phoenix Police Department was tarnished as a result of that incident," said Chief Williams, at a press conference.

London says that the decision also eroded trust among officers. "Morale has never been as low as it is now," said London. "Can I go to work and know that my supervisor or my chief has my back? That's what we are hearing a lot."

After the firings by the chief, multiple members of the department began discussing a possible "no-confidence" vote. PLEA held 12 meetings to educate members on how a no-confidence vote would work, and ultimately, decided not to move forward. London said the PLEA board was never pushing for the vote, and even gave the chief a heads up so she could defend herself to members if she felt the need.

"I think when you do a vote of no confidence, the goal is to have the person you have no confidence in removed. And that's not the situation here, I don't think that would've happened at all," said London.

Chief Williams has the full support of Mayor Kate Gallego, who has echoed the rhetoric that the department needs to do a better job with the community, particularly ones of color.

"From my viewpoint, we have a pretty good relationship," said London. "I like to think about 90 to 95 percent of the community in Phoenix is behind the Phoenix Police Department."

London also said he thought Chief Williams's decision to fire officers "was very uncharacteristic of her, especially in these situations."

"I want to think she is under pressure," said London. "Normally she does go with those [disciplinary review board] recommendations."

Both Meyer and Swick have appealed, and London believes the two men will wear the badge again.

"I am very confident and it probably will cost the city a little bit of money," said London. "Right now we feel that the discipline was so far overreaching."

PLEA will help represent both officers during their appeals, which could take months.

London though is also concerned that the current environment within the department could lead to more officers cashing in on their pension.

"Over half the department can retire right now. That is scary," he said. "The chief can only do so much. It is going to be the city council that is going to get us people and keep people, and it’s not always pay. It’s in the morale."

PLEA, which has an active Facebook page, was critical of Mayor Gallego over the weekend, alleging she was silent regarding the officers who were shot and injured.

The organization later edited and updated the post, upon learning the mayor visited one of the officers, and his family, in the hospital. In the updated post though, they still criticized her lack of communication or statement.

In a statement to ABC15, the mayor's office said:

"This weekend’s shooting was another example of the daily dangers our officers face while protecting our community. Yesterday, I visited our wounded officer and his family in the hospital to express my gratitude for his dedication to service and my wish for his speedy recovery. I continue to support Chief Williams and the work she is doing to make Phoenix a stronger community."