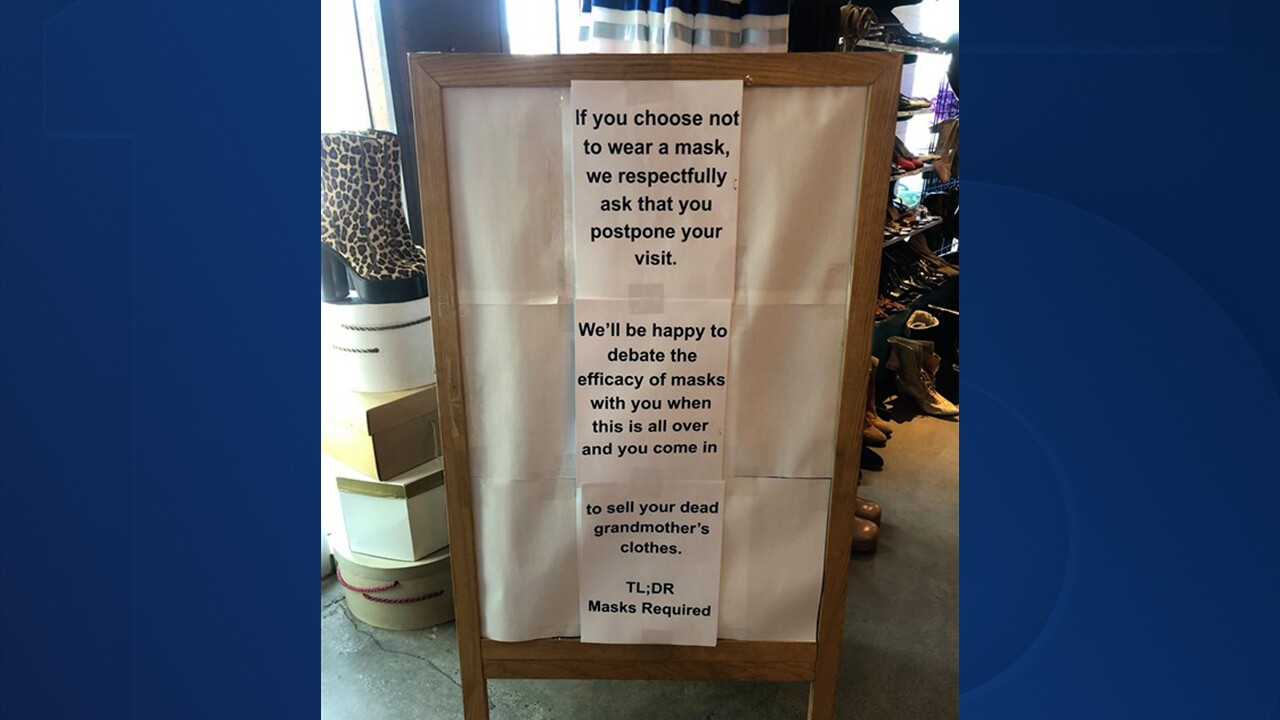 Sarah Bingham, co-owner of Antique Sugar says she created the sign after a few customers argued about having to wear masks inside her store.

The sign reads: "If you choose not to wear a mask, we respectfully ask that you postpone your visit. We will be happy to debate the efficacy of masks with you when this is all over and you come in to sell your dead grandmother's clothes."

Bingham said she has been overwhelmed by emails and phone calls she has been getting from people all around the world. People have even visited her Instagram store to place orders from other countries as their way to show support for her business.

"Nobody likes wearing a mask. This isn't fun. It is uncomfortable, especially here in Phoenix. It is hot, but it's literally the smallest gesture we can make," said Bingham.

Bingham thanked the majority of her customers for wearing a mask, but said there were a few who wanted to fight back.

"They're like you know the masks don't work right? Or something about carbon dioxide retention, thinking that it's bad for you to wear the mask or that you look stupid wearing a mask," said Bingham.

The store re-opened on June 1 and like many other businesses has been struggling during this pandemic, while thinking about their own safety and livelihood.

"Vintage clothing is definitely not an emergency. This is not a reason anybody needs to leave the house right now. It's not like I sell baby formula or eggs," said Bingham.

It seems like her sassy and sarcastic mask mandate message has hit a nerve.

"People from across the country are calling to thank us," said Bingham. She has received messages from Europe and Asia.

"Somebody from Abu Dhabi even reached out to us yesterday and made a purchase from us," said Bingham.

She played ABC15 one of many voicemail messages she received, this one left by a woman thanking the business for taking their strong stance.

"More people need to be like you and maybe things will make a change. God bless you," said the woman who left the voicemail.

Bingham said being young and healthy, she feels confident that someone like her would survive COVID-19, but she does not want to be a carrier.

"I can't put my employees and customers at risk," said Bingham, adding that in a small business with a small staff, an exposure could lead to the closure of her store.

"Some people are trying to make this some kind of a political statement but people are not dying along party lines," said Bingham.

She said wearing a mask is a small sacrifice everyone should make. "It really is. If we can do this and get it under control, we can get back to normal ‘til there's a vaccine," said Bingham.