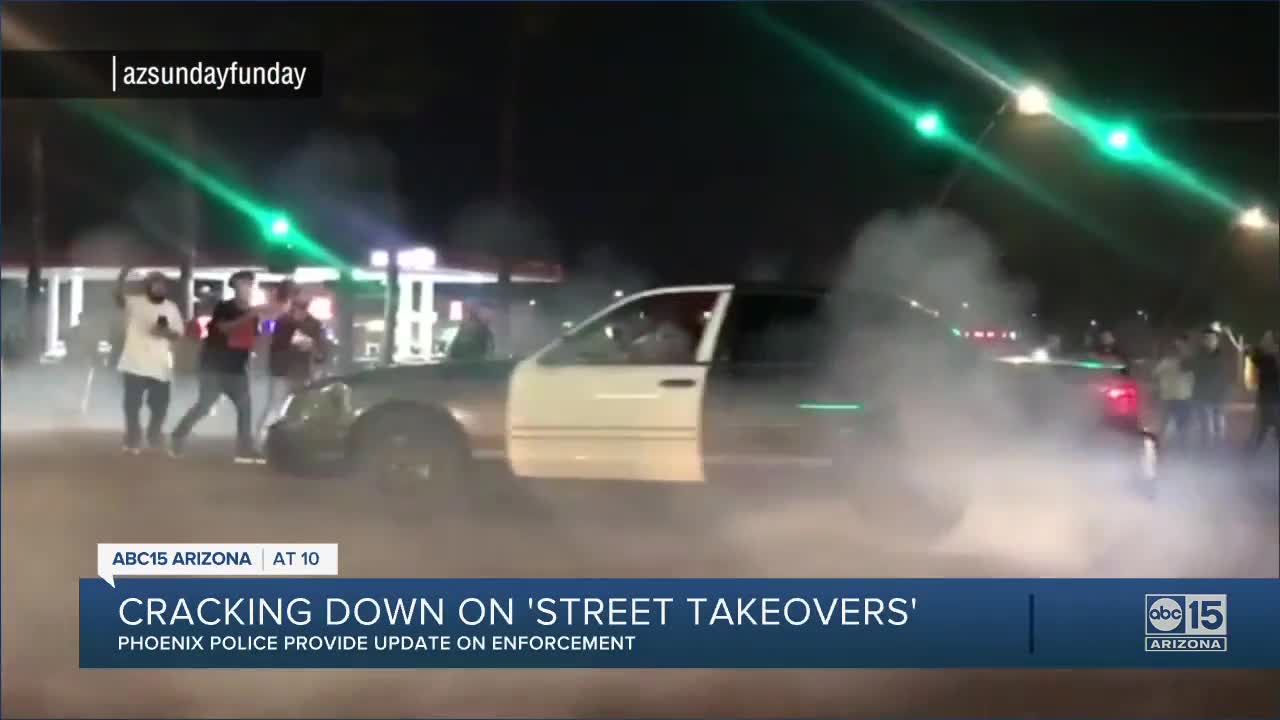 PHOENIX — A law meant to help stop a major criminal element in the Valley stalled before it could even get an official vote. State Senator Paul Boyer says it's clear, stricter penalties are on the horizon for those involved in street racing.

The videos are all over the internet. Arizona is now a hot bed for street racers. The Phoenix Police Department formed a task force last year aimed at putting a stop to it after it exploded in the West Valley.

But with each bust, the group who uses social media and word of mouth to set up events, began evading police at all cost.

“We saw them really migrating to different parts of our city, we saw them in Glendale, we saw them in Gilbert, we see them in Mesa now, and on the highways, so it’s no longer just a Phoenix issue, it’s a state wide issue,” said Sgt. Fortune who says drug deals are taking place at the events along with the occasional shooting.

“I’ll hear a lot of the engines revving up, a lot of the tires screeching,” said Eric Washman. “It gets pretty bad, it does,” said Washman. “Pedestrians shouldn’t have to worry for their lives just to cross a street to do the errands they need to do. These people should not be driving like that.”

“They just blocked the intersection so we couldn’t pass by,” said a woman who did not want to be identified but saw the chaos firsthand near 67th Avenue and Indian School. “They were just doing a lot of burnouts, it was stupid and dangerous.”

Phoenix police say over the last 11 months, racers have been caught shutting down busy intersections, pulling high speed maneuvers as hundreds gather to cheer them on. The accidents and the inevitable injuries all captured on cell phones.

“It’s just mind boggling to see how many innocent kids who think this is just for fun show up to these and end up getting hurt,” said Sgt. Fortune. “I just don’t get how it’s fun to see someone fall out of your car on accident and literally break bones.”

Since the start of the task force, 2,100 tickets have been handed out. More than half involved criminal charges. Three hundred and fifty for racing.

But is that added enforcement actually working? “We cannot do it alone,” said Sgt. Fortune.

That’s why State Senator Boyer introduced a bill aimed at harsher penalties for those caught at these gatherings. It would allow police to impound a racer's vehicle for 30 days and increase fines that would help pay for more enforcement. Unfortunately it didn’t make it past the rules committee.

Boyer says he plans to reintroduce the bill with slight changes in the next legislative session.