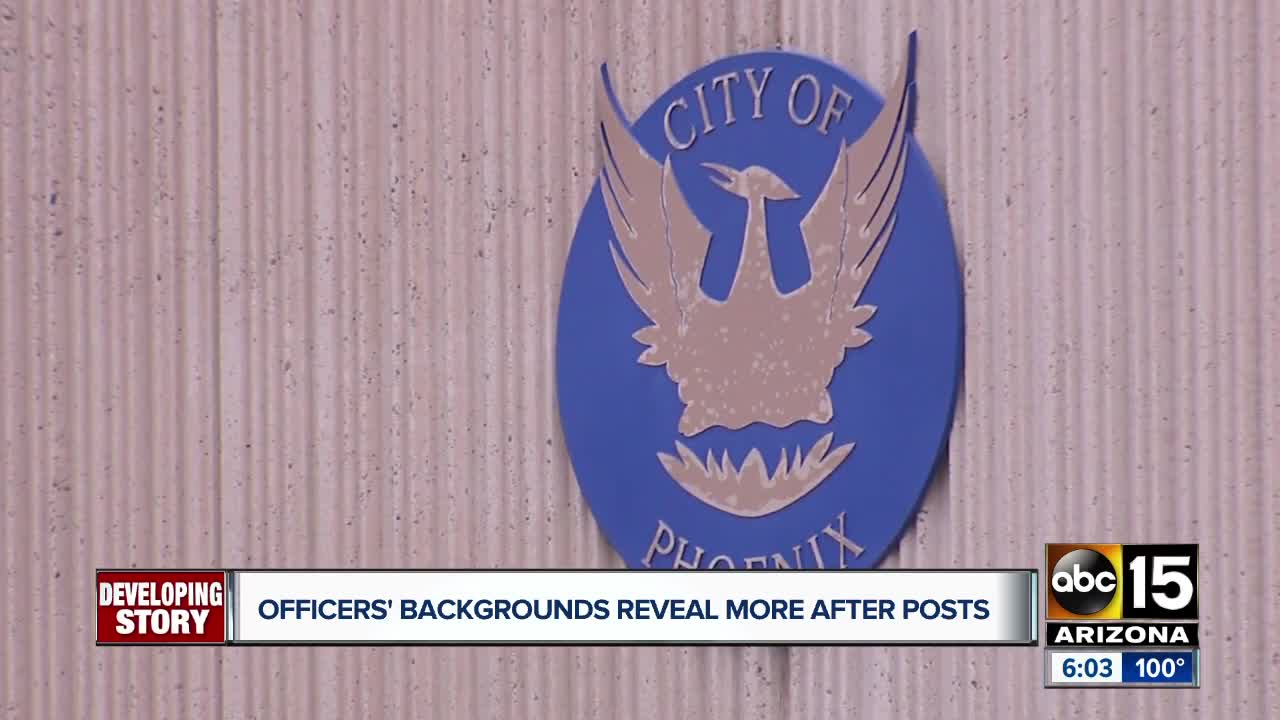 A group has put together a database of searchable social media posts by police officers nationwide. 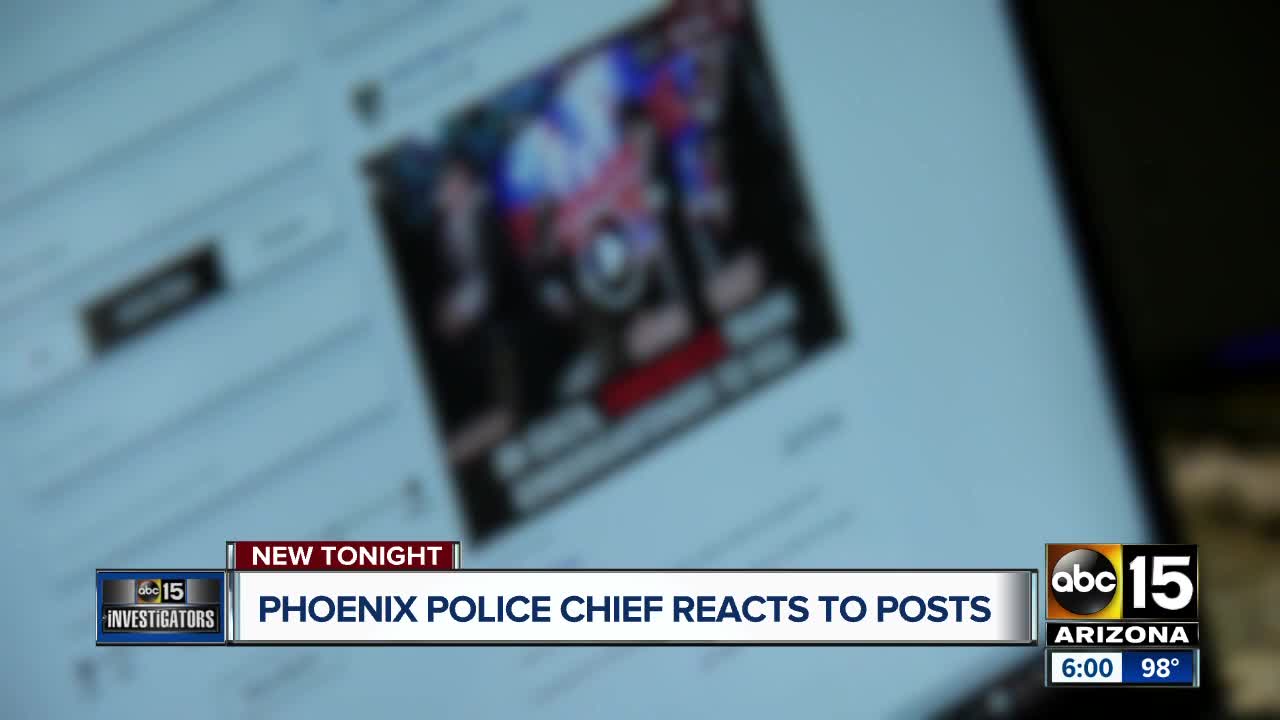 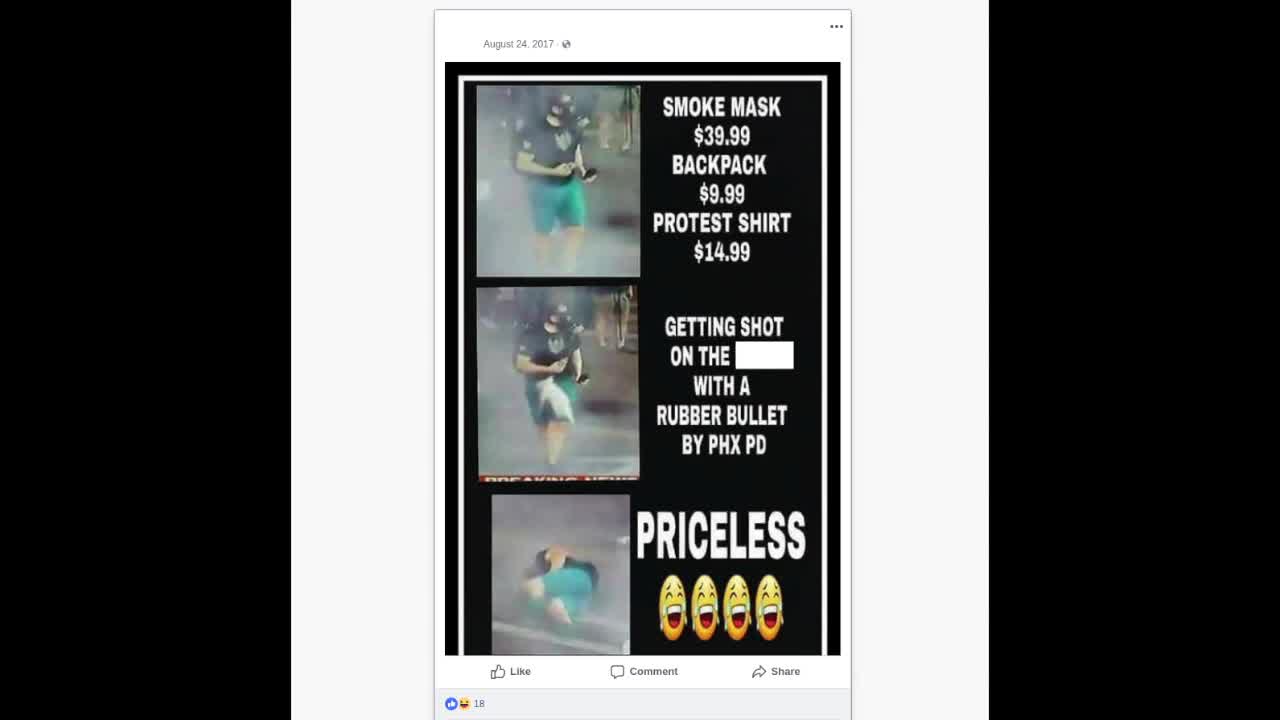 The Plain View Project looked at thousands of Facebook posts, some dating back a decade, from officers in Phoenix and several other cities.

She flagged posts or comments from about 75 Phoenix officers, and she said such messages can erode the public’s confidence in fair treatment from law enforcement.

In a time with increased scrutiny about police use-of-force, Baker-White said her findings raise questions about subculture in some departments. “I want departments to increase accountability, but also try to look at their cultures within their department and see what they can do to stop these toxic feedback loops,” Baker-White said.

Phoenix police officials said they'll look at all the posts red-flagged by The Plain View Project to determine if any misconduct exists within their ranks.

I became aware of the entire website today which alleges misconduct by current and former Phoenix Police officers. The language and terminology used in the posts are embarrassing and disturbing. They completely contradict how the Phoenix Police Department should speak about the members of our community or others. Nor are these posts in keeping with our mission and values as city of Phoenix employees. I have high expectations for the men and women who work with me. When potential misconduct is brought to my attention, it is immediately addressed. I have asked our Professional Standards Bureau to look further into this matter.

In an interview Tuesday, Williams went on to say, "The posts were comments that clearly promote hate. It doesn't promote the mission of the police department, it is anti-sexist, anti-racist and anti-religious."

"That's not who we are. We just completed implicit bias training. The City of Phoenix Police Department is not a place of hate, we're just committed to getting to the truth."

Phoenix Mayor Kate Gallego said in a statement Tuesday she was "embarrassed and disappointed" to read the comments made by Phoenix officers.

"There is no context in which these statements are acceptable," Gallego said. "This city has absolutely no place for hate. Our Police Chief is actively pursuing a thorough investigation. While these officers are in no way representative of our city’s entire police force, or for that matter, our city, the choice by these officers to promote hate speech is a black cloud over all of us."

"[A]nti-police groups are surprised when the cops they call racists, Nazis, pigs, and murderers resent it? Get real. They still respond to every call and do their best to help, regardless of how the caller feels about them," DiCiccio said. "[T]o smear our entire department for the words - not actions, words - of a handful of officers is, at best, disingenuous, and is truly insulting to the literally thousands of men and women who put their lives on the line for us every single day and do so with honor."

“People -- including cops -- say things they regret or that are unfortunate,” said Phoenix Law Enforcement Association President Mike London in a statement. “To judge an entire police department by a few social media posts is doing a grave disservice to the nearly 3,000 sworn officers who work the front lines in Phoenix every day.”

London added officers use social media to better connect and better understand our city, and nearly all of the officers' posts are positive.

Retired Phoenix Police Officer Mark Spencer is one of the officers flagged by Project Plain View. His posts question Islamic terrorism. He shared articles talking about the number of terror attacks by Islamic terrorists.

When asked if he considered himself "anti-Muslim," he said, "Absolutely not. I know what I post and I know what I'm about. I am pro-person, I am anti-crime, and I am pro-rights."

Spencer questioned the intent of the Plain View Project. "The purpose of this project is to create outrage, not to solve problems. It's to stir the pot," said Spencer.

He added that taking any post out of context could paint someone in a bad light.

ABC15 reviewed posts by his former colleagues with Spencer and asked him what he thought about some of the posts that took jabs at everything and everyone from migrants, to Muslims, the gay and transsexual community, police protesters, and Democrats.

He called it a very delicate balance between an officer's first amendment rights versus professionalism. He also stated officers who work a very dangerous job sometimes use dark humor to entertain themselves.

"Everyone needs to know, once it's there it is there forever. A dark sense of humor is one thing, offensiveness is another, just balance it out. They do have a right to their opinion, but the department also has a right to policy," said Spencer.