Phoenix officer praised for helping woman whose car was repossessed 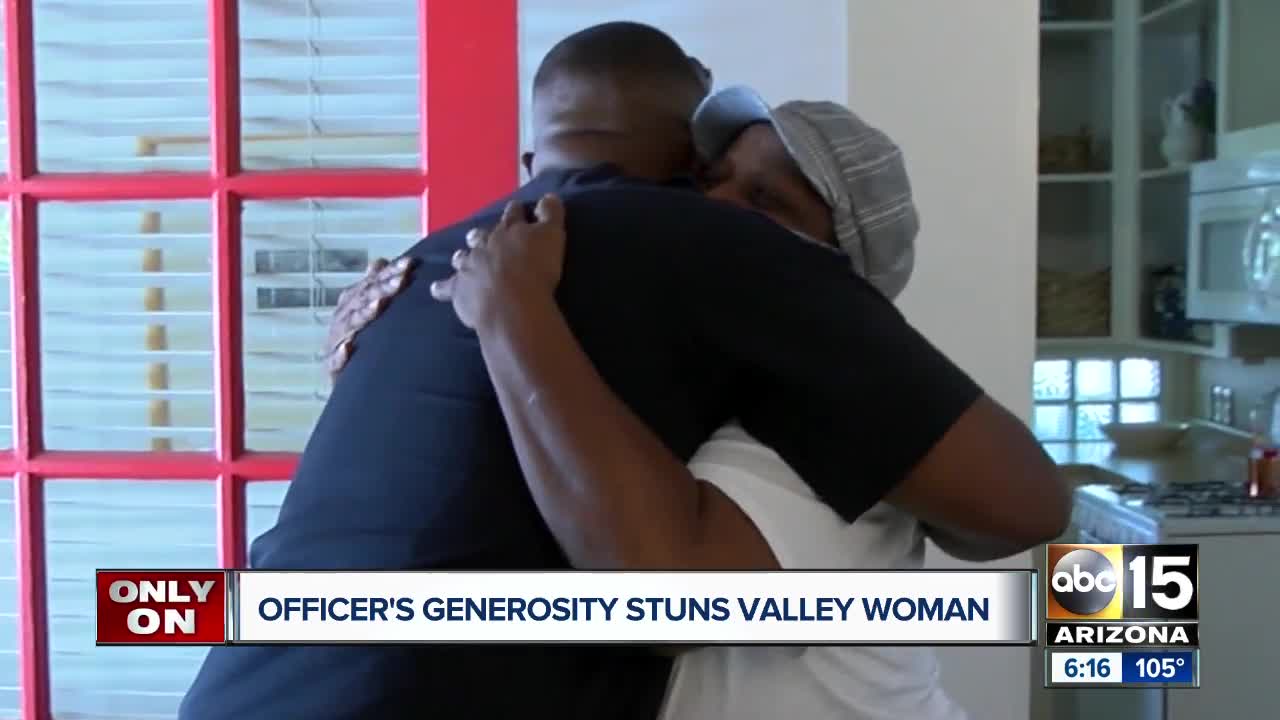 A Phoenix police officer is being praised for his generosity after helping a woman in need that he had just met.

PHOENIX — A Phoenix police officer is being praised for his generosity after helping a woman in need that he had just met.

Not long ago, McKoy and Officer Bryant were strangers.

Their heartwarming encounter took place along 48th Street and Thomas Road last week. McKoy was heading to a new job when she went outside to discover one big problem.

"I'm all happy, new job getting ready to start the first day, go out the door around sevenish in the morning, and my car is gone," said McKoy.

McKoy, once homeless, works with an organization called Saving Amy. Founder Jennifer Kiernan says those they help are assigned a journey partner.

"We fill the gap from the shelter to transitioning into life," said Kiernan.

McKoy says during hard times she'd taken out a title loan on her car and fell behind on her payments. A decision she clearly regrets. The company repossessed the vehicle that morning. She called and broke the news to her journey partner, but her spirit remained high.

But a big deal was certainly headed her way. While walking to the bus stop, McKoy came across Officer Bryant running a traffic signal.

"I said hello, and he said, 'Hey, how are ya doing?' and he smiled, and he had a book, and I said what are you reading, and he began to tell me about this book he was reading," said McKoy.

"I told her a book on business and investing, and I saw her bible in her hand, so I commented you got the good book and she said I keep my word with me at all times," said Bryant.

Officer Bryant then asked how she was doing. Upon hearing the news about her car, something compelled him to act.

"She reminded me of my grandmother, so it really drew me to her," said Bryant. "She was about the cross at the crosswalk, and I was like well how much do you owe, and she said it was six hundred dollars and I was like don't leave."

"He went to his car, and he came back, and he gave me 600 dollars, I'm getting flustered just thinking about it," said McKoy. "I thought no, no, this isn't real, and it was, it was wonderful."

"Her reaction was priceless, I told her it wasn't a joke," said Bryant, who handed her the cash. It was cash he was supposed to drop off at the bank a few days earlier.

"So I started to cry and said what can I do for you, how about if I pray for you because that's the only thing I got, I got some prayer," said McKoy.

That's just what they did. McKoy says she's still shocked by his kindness.

"Plus he's young and good looking too," said McKoy with a laugh.

She's got her car back and a new friend for life. Giving everyone a snapshot of what could be, if we opened our hearts a little more.