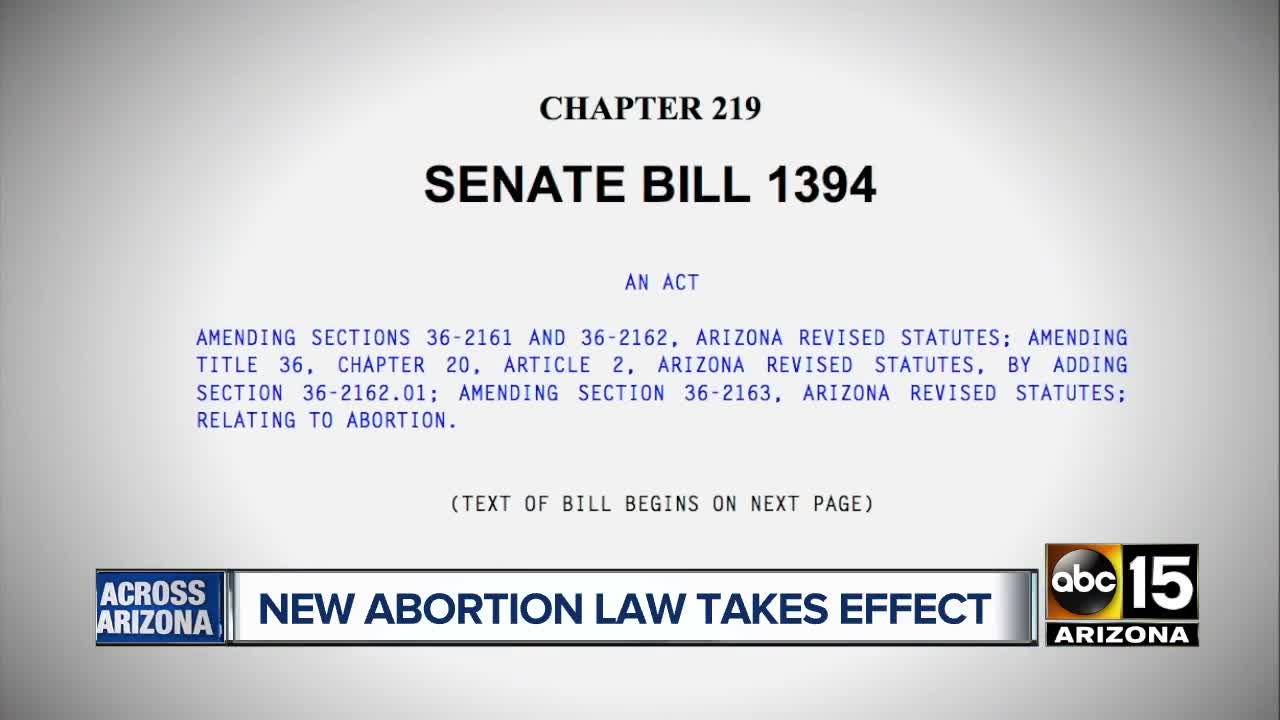 Every woman who wants to get an abortion in Arizona will be asked for a specific reason why. ABC15's Zach Crenshaw has the story.

PHOENIX — It is one of the most controversial issues in America -- getting an abortion.

Every woman who wants to get an abortion in Arizona will be asked for a specific reason why. The bill took effect on Jan. 1, 2019.

The law requires doctors to ask the patients for their age, race, educational background, marital status, and "the reason for the abortion," among other things.

The bill is highly political.

Pro-choice groups say the bill aims to make the process more cumbersome and seeks to discourage women from getting abortions.

Although there are many questions required, women can "decline to answer" why they are seeking an abortion.

Arizona Planned Parenthood was one of many women's rights and health organizations that opposed the bill when it was first introduced in early 2018.

"Even when we disagree with laws, we still obey them," Liggett said. "We think that these questions are designed it to be intrusive and intimidating to women."

Governor Ducey signed the bill into law last April, but it was introduced by Republican State Senator Nancy Barto of Maricopa County.

In a statement emailed to ABC15, she said:
"Arizona's enhanced reporting law had not been reviewed and updated for several years so it was overdue. The new law ensures that our informed consent laws and other protections for women seeking an abortion have the oversight necessary to ensure these common sense provisions are being followed. We took the best practices from other states and applied them in Arizona and added critical protections for women who are victims of sex trafficking. These women are often coerced into having abortions by their captors, so ensuring they have an escape avenue when they come to an abortion clinic is an important provision in the bill."

One of the two groups that publicly supported the bill was the Center for Arizona Policy.

"We support women’s rights, we support data collection. This isn’t the way to do it," said Jason Vail Cruz with the Arizona Coalition to End Sexual and Domestic Violence.

Like Planned Parenthood, they also opposed the bill. "This was an extra step that could really be traumatizing for sexual violence survivors in particular."

Pro-choice groups argue that the questions are unnecessary because abortion data is already collected and published by the Arizona Department of Health every year.

The new questions will give both sides more information about which women are getting abortions, as well as when, where, and why.

The big question remaining - what new bills will Arizona lawmakers pass with the answers?

The bill also requires doctors to ask women if they were raped, or are victims of sex trafficking or domestic violence. If they say yes, the doctors are required by law to provide available resources for the women to seek help. Pro-choice groups say that practice already exists in the medical field, and doubt many women will feel comfortable disclosing that information before an abortion.