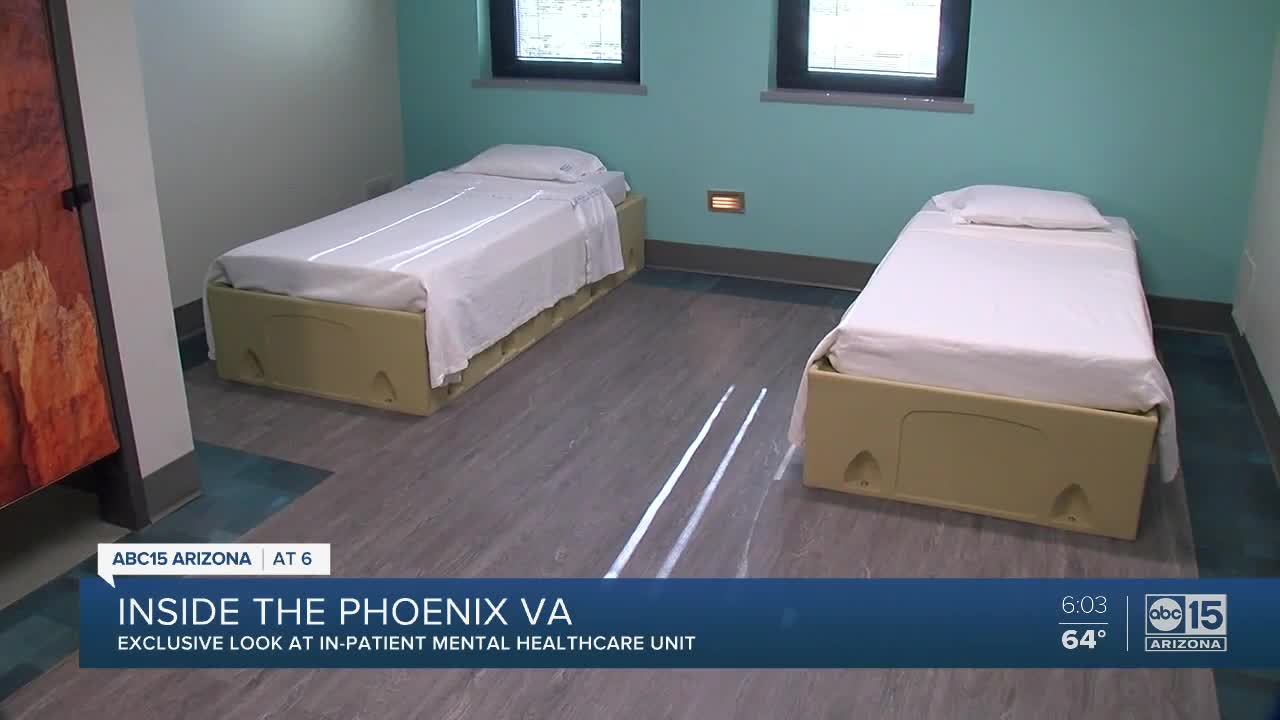 ABC15 takes an exclusive tour of the in-patient mental healthcare unit at the Phoenix VA.

PHOENIX — The Phoenix VA is getting ready to unveil its newly renovated in-patient mental healthcare unit on Tuesday at noon.

A Veterans Affairs Department spokeswoman said the facility spent $1.27 million dollars to give the facility a facelift.

The changes highlight security features to keep veterans safe from harming themselves or others around them, but it's also meant to address the stigma surrounding mental healthcare.

Dr. Maureen McCarthy, the chief of staff at the Phoenix VA said the facility looked very "institutionalized" before. The new changes will make the facility feel more "homey" while addressing safety issues involving veterans who may be considered at risk for harming themselves.

The in-patient mental health care unit which houses 48 beds is in a highly secure section of the building, accessible through multiple locked doors.

The Phoenix VA invited ABC15 on a tour of several completed sections of the newly renovated facility.

Dr. McCarthy said safety and security were top priority while designing the unit as they housed some of our most vulnerable veterans.

"Patients might come here if God forbid, they don't want to live. They might want to try and take their life or if some of their conditions are acting up so they can't function in society," said Dr. McCarthy.

She added that they did not want veterans to feel as though they were in an institutionalized environment, and mentioned the facility before the renovations had institutional paint colors and broken and chipped furniture.

The designers paid a lot of attention following mental healthcare guidelines when it came to all the furniture in the units. All of the chairs and tables in the day rooms were weighted down and extremely heavy to lift, so they could not be used as weapons to assault someone.

The shades, television, and clocks were encased in glass to also remove the risk of being able to use those items to hurt someone.

The telephone cords were extremely short, and artwork on the wall was bolted in securely and had rounded edges so they too could not be used to hurt oneself, or someone else.

The beds in the rooms were bolted down. The doors to the bathroom were made of heavy Styrofoam-type material and attached by magnets. Staff said if someone tried to use the door frames to hang themselves, the door would simply slide down and collapse.

The sinks and toilet fixtures all had sloping surfaces so one could not tie a rope to it and door frames had sensors that would go off if they sensed any type of heavy weight.

Staff said all of these were mental healthcare facility best practices and guidelines they were following.

Artwork consisting of nature and landscape portraits brightened up the hallways and rooms to give it a more "home-like" feel.

The ribbon-cutting for the facility is expected to take place on Tuesday at noon.

Dr. McCarthy said erasing the stigma surrounding mental healthcare was an issue near and dear to her heart as her late father was a veteran who had been blinded and suffered from serious mental illness.

"I've spent my life taking care of veterans, about 29 years now as a VA psychiatrist," she added.

VA staff said while no veteran wanted to live inside an inpatient mental healthcare facility, they hoped being in a nicer environment than what they previously had would help erase some of that stigma surrounding mental healthcare treatment in the United States.

"That is why this renovation is very important to me. If it makes the experience of coming to an inpatient psychiatric unit more humane, more comfortable, and less stigmatizing then we're doing the right thing," said Dr. McCarthy.