Does HOA actually have ability to kick teen out of 55+ community? 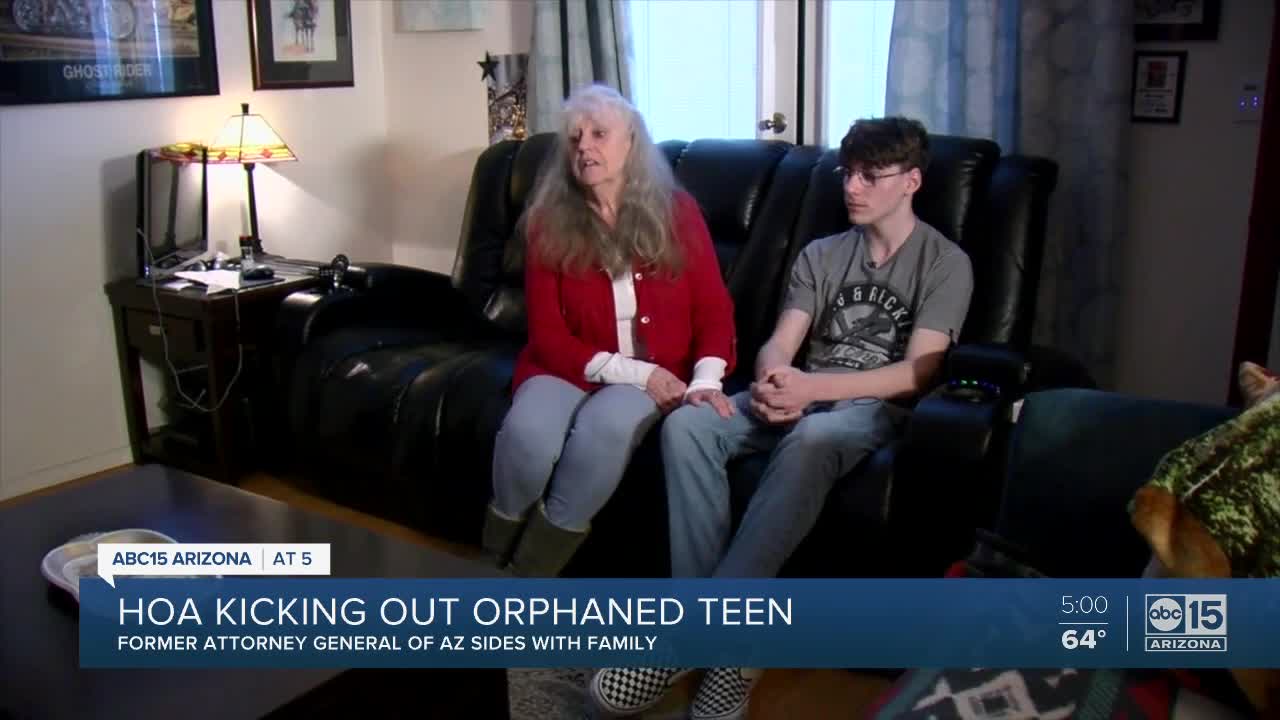 An Arizona homeowners association says they are now working with the grandparents of a 15-year-old boy to resolve the teen's living situation after the family's story went viral.

PRESCOTT, AZ — According to the Fair Housing Act, people are protected from discrimination when renting or buying a home, receiving a mortgage, seeking housing assistance, or taking part in other house-related activities. The act prohibits discrimination because of race, color, national origin, religion, sex, family status, and disability. Under the umbrella of the Civil Rights Act of 1968, age discrimination is also prohibited when buying a home.

Senior living communities have an exemption to age discrimination if they meet the three following guidelines:

1. At least 80 percent of the homes in a community are occupied by at least one person 55 years or older.
2. There are significant facilities and services specifically tailored to meet the social and physical needs of older residents.
3. Policies and procedures are published and adhered to that demonstrate by the owner or manager to provide housing for people 55 years or older.

This type of case is not new to Arizona. In 1998, Youngtown, then a senior living community, attempted to remove a teen and the grandparents from the community, according to former Arizona Attorney General Grant Woods.

"He was shooting baskets into the night outside in the driveway, a lot of these oldsters didn't like that," said Woods, who was Attorney General at the time. The community of Youngtown fought back, and Woods decided to step in on behalf of the family.

After further investigation, Woods found that the community of Youngtown did not complete their age restrictions correctly, allowing for the teen and his grandparents to stay. Woods said he risked votes politically to do what he believed to be right.

"It seems to me that the right thing to do is to show a little compassion," said Woods.

In Collin's case in Prescott, Woods said he would still favor compassion over the rulebook.

"What would you want him to do? Go live on the streets because we live in a 55 and older community?" said Woods. "When a tragedy strikes a family in your community I would think that these old people who live there would walk over and say 'how can we help.”

"The Passmores appreciate the HOA’s and their counsel’s words of sympathy for the tragic losses that brought young Collin to his grandparents’ community. Prior to the attention brought to this matter, the HOA was willing to allow Collin to reside within the community as a guest, temporarily. It was not willing to make an exception that would allow Collin to live in a home with his grandparents. The HOA did not suggest other options, which left the Passmores with the option of trying to find a home outside of their family for Collin or sell their home and move.

Counsel for the HOA and I have in fact been in contact regarding potential resolution. It is unclear at this time whether there is a solution. We expect that the HOA will exercise its discretion to act on their words of sympathy and “do the right thing.” We will be exploring possible options over the coming days, and are hopeful that the HOA will welcome Collin and his grandparents.

It is unfortunate that it has taken widespread media attention to this issue for the Passmores to feel that their voice is being heard and considered by the HOA. We greatly appreciate the local and national support, encouragement and offers the Passmores and Collin have received in this situation. We ask that the support and encouragement stay positive and that people extend compassion, not threats, toward all of the parties involved."

Schaaf-Olson said Clabaugh moved in with his grandparents before his parents died. That is when the HOA registered him as a guest and could stay until June of 2020. After his parents died, the HOA did not change their position, despite knowing of their passing. Before this week, the last time Schaaf-Olson spoke to the HOA was on December 5.